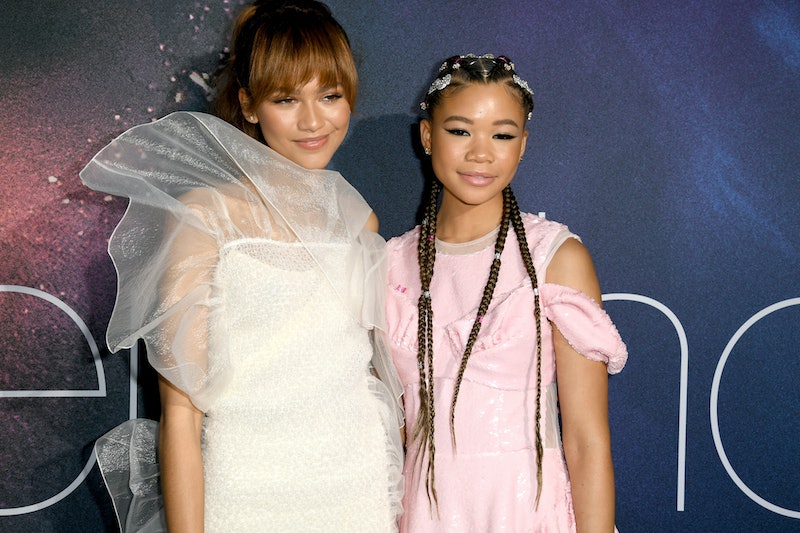 Sunday came and went sans a new Euphoria episode, so stars Zendaya and Storm Reid danced to “Apesh*t” to fill the Euphoria void in fans’ hearts. On the heels of the HBO hit’s Season 1 finale on August 4, onscreen sisters Rue (Zendaya) and Gia (Reid) took to social media with a spirited rendition of Beyoncé and Jay-Z’s collaborative track “Apesh*t” from their joint 2018 album, Everything is Love. In the video uploaded on Sunday, Aug. 11, the duo lip-synced to the track in the clip shared by Zendaya on the first Euphoria-less Sunday.

“Because there’s no Euphoria tonight…I present your favorite tv sister duo @stormreid," Zendaya captioned the post. In the clip, she rocks a gray hoodie (no, not that maroon hoodie from the series that's layered with double meaning) while Reid dons a Chicago Bulls jersey with her hair fashioned in Princess Leia-esque buns. “Gimme my check, put some respect on my check,” the duo lip sync. “Or pay me in equity, pay me in equity or watch me reverse out the debt.”

Are you listening, HBO? Zendaya and Storm said give them their checks, put some respect on their checks for their standout performances on Euphoria.

The lighthearted video comes after an emotional Season 1 finale, which may or may not have seen Rue relapse into her old drug-addicted ways. The scene — accompanied by Zendaya and series composer Labrinth’s collaborative track “All Of Us” — featured an ethereal dance number with a church choir. The potential relapse came on the heels of Jules’ departure after Rue’s inability to follow through on her plan to skip town together. Elsewhere, drug dealer Fez’s fate is unknown while Nate and Maddy’s tumultuous relationship seemingly comes to a head. The series has been renewed for a second season, so fans will just have to be patient in regards to the fate of these respective characters.

Given the series' dark subject matter, it’s refreshing to know its stars can still find time to lip sync to Queen Bey. More so, Zendaya is a well-documented Beyoncé stan. She also famously appeared in a cameo in the singer’s visual album Lemonade alongside stars such as Amandla Stenberg and Chloe and Halle Bailey in the “All Night” video. Shortly after its 2016 release, Zendaya took to Instagram with a photo of the group. “One of the most beautiful things I've ever had the honor of being apart of…,” she wrote on Instagram. “Black. Girl. Magic.”

In an interview with Good Morning America in December 2016, Zendaya gushed about the experience, “It was a really powerful moment and I feel like I was a part of music history… I’m just obsessed with Beyoncé and have been since my birth.” She continued, “Just to be there and really learn from her and see how amazing she is — how detail oriented. It was just cool to just sit back and watch.”

A premiere date for Euphoria Season 2 has yet to be announced, so, for now, fans will just have to listen to Beyoncé on full blast as they immerse themselves in fan theories about the finale.