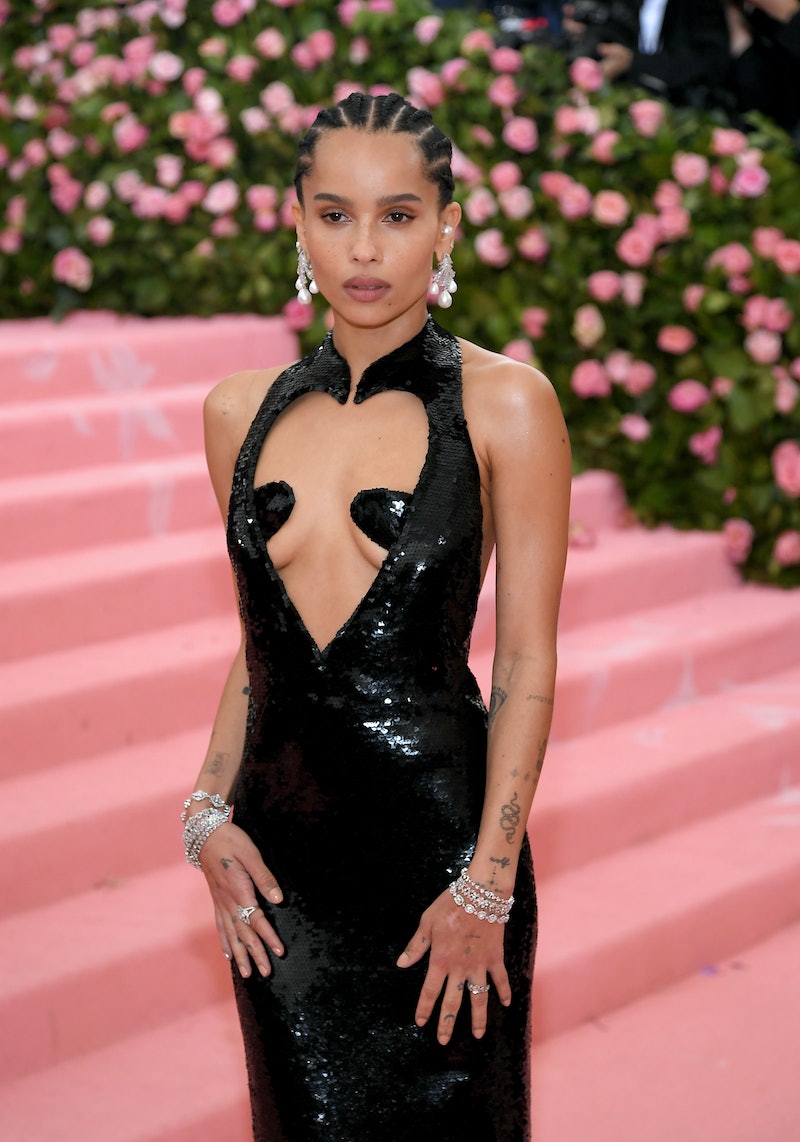 Zoe Kravitz is known for her envelope pushing style, so fans were on high alert for her OOTDs the closer she got to her wedding day. And not one to disappoint fans, Zoe Kravitz wore bike shorts to her rehearsal dinner. Kravitz exchanged vows with Karl Glusman in her dad's, Lenny Kravitz, 18th-century Paris mansion on June 29. But a day earlier, the paired celebrated their rehearsal dinner in Restaurant Lapérouse.

That is when Kravitz debuted her bridal biker shorts look, proving no article of clothing is off-limits for the Big Little Lies actress. According to Harper's Bazaar, Kravitz wore a custom white crochet pearl dress over white boy shorts and a strapless silk bra, all of which was made by Danielle Frankel. Kravitz accented the pearl-studded look with South Sea cultured pearl and diamond earrings from Tiffany & Co.

Interestingly enough, when Frankel first designed the crochet frock, she had Kravitz in mind. Frankel was a CFDA Fashion Fund finalist, and shared with Harper's Bazaar that when she first sketched the sheer dress, she was thinking of Kravitz. Frankel never worked with the actress before but wanted to, and just a few short months after launching the design, Kravitz was wearing it to her rehearsal dinner in Paris.

Seeing how most of Europe is now experiencing a massive heatwave, the dainty dress with white bike shorts was the perfect thing to beat the heat.

The couple has been dating since 2016. The two met at a bar while out with mutual friends, and Kravitz invited Glusman over to her apartment afterwards for an after party. They quickly moved in together, and the Nocturnal Animals actor secretly proposed to Kravitz in Feb. 2018.

Kravitz didn't announce the engagement until a Rolling Stone reporter absently asked about the ring she was wearing on her left hand. In the interview, Kravitz revealed that the proposal was originally supposed to happen in Paris, but those plans fell through because of their hectic schedules. Instead, Glusman lit candles all over their living room, and put on Nina Simone. He proposed in their apartment while Kravitz was a little drunk and wearing sweatpants. “I think I was a little drunk. I could feel his heart beating so fast — I was like, ‘Baby, are you OK?’ I was actually worried about him!” Kravitz told Rolling Stone. “He nailed it. And I love that it wasn’t this elaborate plan in Paris. It was at home, in sweatpants.”

While the engagement didn't happen in the City of Lights, the wedding did. As for Kravitz's rehearsal dinner look, this isn't the first time the actress donned a bra for a big event. Kravitz wore a $24,000 18-karat gold bra top to the Oscars after-party in 2019. The bra was from Tiffany & Co.'s Elsa Peretti collection. Kravitz paired the gold mesh top with a simple low-rise black Yves Saint Laurent column skirt.

While there is no news yet what kind of look Kravitz wore on her actual wedding day, one can assume that her wedding dress was just as memorable as her biking shorts rehearsal dinner outfit. When it comes to style, Kravitz's eye is unbeatable.