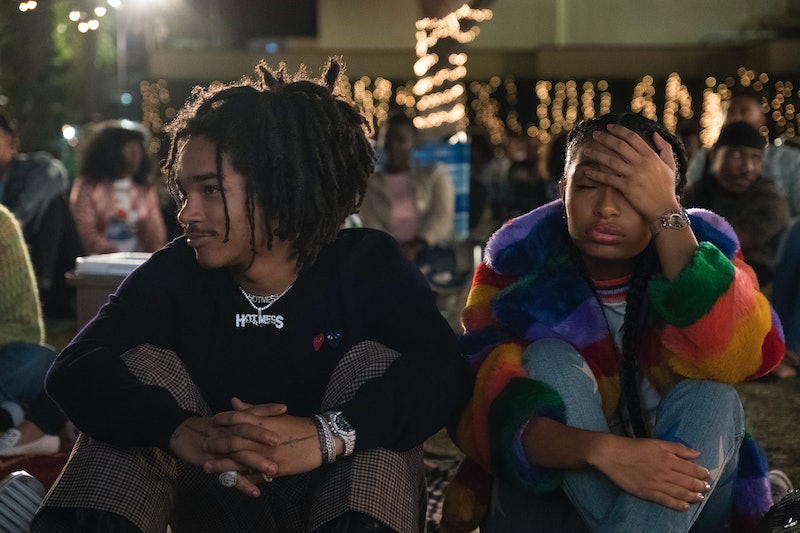 Zoey on grown-ish is grown now! She’s a sophomore and not a lowly freshman; she has a new car; and she has a grip on things, you know? Well, at least, that’s what she thinks. In reality, Zoey is just slightly less green than the day she first stepped foot on campus, but at least she’s got her friends to back her up. She has Luca, her boyfriend, too, but Luca and Zoey’s relationship on Grown-ish is getting more complicated by the minute — and it’s because they’re using their phones to communicate.

Luca and his kimonos have been in Paris all summer long, and Zoey is patiently awaiting their eventual reunion when Season 2 starts. She even gets a sign to hang up in her room that says “Bienvenue home,” which is a bastardization of “Welcome home,” for those of you who do not speak the language of our Gallic friends. But, as every person who has imagined a movie-style situation in his or her life, Zoey is disappointed when Luca doesn’t text her when he’s back in his dorm room and then falls asleep before they can get in their “together time.” Of course, Zoey goes to her friends to talk about her failed realities instead of, you know, actually talking to Luca.

In taking her friend’s advice, Zoey also begins acting really strange in order to make her and Luca more of the “relationship goals” she seeks. Luca bristles, because she’s not being genuine, and frankly, Zoey is being kind of annoying, too. Eventually, Zoey realizes she feels more comfortable discussing her feelings over Snapchat, because that was how she and Luca kept in touch all summer, and that’s fine… to an extent. But it’s Snapchat that caused some of these problems with Luca and Zoey’s relationship, too.

Our dependence on phones and other screens as a means to feel connected is actually pretty alienating. And while the words come through easily when you’re typing them on your computer or tablet, there’s no substitute for real conversation. Real conversations, in which you say, “I love you” or “what’s wrong with us” or “I miss you” or “you make me mad when you X,” all while maintaining some level of eye contact. The words can be the same whether spoken or typed, but they have completely different meanings depending on the medium. It's just science.

It’s why Zoey fails so miserably to figure out what is happening with her relationship. Instead of going to the source, Zoey depends on the degrees of separation between herself and Luca. The false intimacy of screens is no match for actually being able to hold your partner’s hand, and perhaps that’s what people, especially young people, are missing from their relationships, at least at first. Before texting, before Snapchat, before Facebook, you had to call a home and speak to your crush’s parent or roommate before you could speak to them, which meant you really had to be determined and ready to dive into a conversation before you picked up the phone. At the very most, you had to connect at a party or, gasp, sneak out. You had to say the things you wanted to say in person, because there was no other way to say them.

Now, all of this technology didn’t make relationships worse, but it does change them and the way we process them. By going back to those old school styles of communication, Zoey and Luca are on a better, more understanding path on grown-ish. Hopefully is lasts.