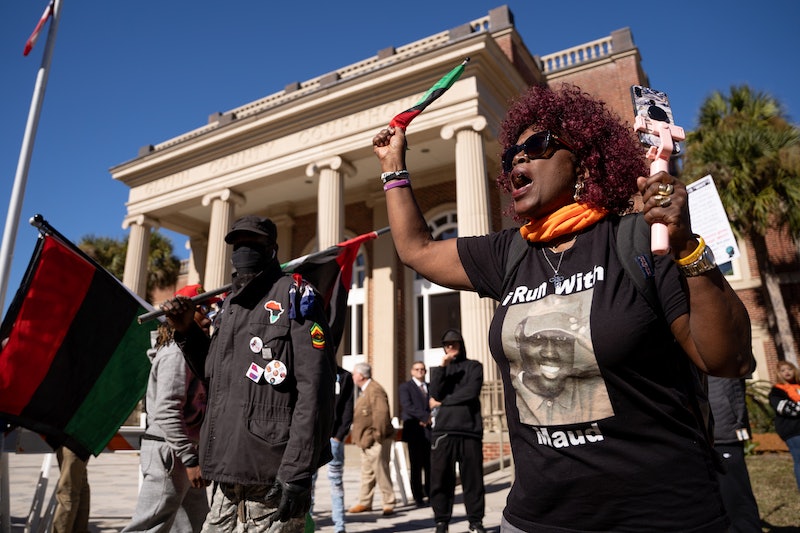 On Nov. 24, 2021, after more than 10 hours of deliberation, the jury in the trial of the three white men accused of murdering 25-year-old Ahmaud Arbery, who was Black, delivered their decision. Travis McMichael, 35, was found guilty on all nine counts he faced, including malice murder and felony murder; his father, Gregory McMichael, 65, and their neighbor, William Bryan, 52, were both found guilty of felony murder but not malice murder, among other charges. On Jan. 7, all three were sentenced to life in prison; only Bryan was sentenced with the possibility of parole after 30 years.

"When I entered the courtroom on October 18th, I sat in that courtroom for five weeks straight, but I knew that we would come out with a victory,” Wanda Cooper-Jones, Arbery’s mother, told reporters after the sentencing, according to CNN.

The verdict in this case is independent of the federal hate-crime charges connected to Arbery’s killing that the three men are also facing. Jury selection in that trial is set to begin on Feb. 7.

On Feb. 23, 2020, Arbery had gone for a jog in his suburban neighborhood outside Brunswick, Georgia, when he was confronted by the McMichaels and Bryan. Around midday, the three chased Arbery, and Travis McMichael fatally shot him; Bryan also recorded a video of Arbery’s death and struck him with his car. The McMichaels and Bryan were charged with Arbery’s murder after the video was disseminated widely and led to nationwide protests. When news of the killing first came to light, in May 2020, it was described as a modern-day lynching.

The trial of the three men invited controversy from the jury selection, which began in mid-October 2021. Only one juror chosen was Black, while the others were white, and the judge presiding over the case even said there appeared to have been “intentional discrimination” during the jury selection, according to CNN. What’s more, the defense argued that the three men were making a lawful “citizen’s arrest,” attempting to restrain Arbery on suspicion of committing a number of recent break-ins in the neighborhood, despite a lack of evidence. (The law that theoretically allows for citizen’s arrests in Georgia was substantially weakened as a result of this case, The New York Times reported.) In her closing statement, lead prosecutor Linda Dunikoski said the three men had “initiated” the confrontation and therefore could not claim they acted self-defense, per NPR. “All three of these defendants made assumptions, made assumptions about what was going on that day,” Dunikoski said, NPR reported. “And they made their decision to attack Ahmaud Arbery in their driveways because he was a Black man running down the street.”

The guilty verdict came five days after a jury acquitted Kyle Rittenhouse — the 18-year-old who traveled to Kenosha, Wisconsin, and shot three Black Lives Matter protesters in the summer of 2020 — of all charges. Rittenhouse had also claimed he acted in self-defense. The decision in that case was widely seen as unsurprising, if disappointing. “If you needed yet another example of the two justice systems at work in America, look no further than the delayed arrest, spectacle of a trial, and acquittal of Kyle Rittenhouse,” Ben Crump, the lawyer for the family of Jacob Blake, whose shooting by police in June 2020 sparked the protests to which Rittenhouse traveled, said in a statement.

Though the three men were found guilty of murdering Arbery and sentenced to life in prison, the fact that the perpetrators were found guilty is still all too rare. If this news wants you to continue to demand justice for Ahmaud Arbery and other victims of anti-Black violence, you can do so in a number of ways.

One place to start is by donating to groups that support Black communities’ mental health and well-being. This list details 20 nonprofits and other organizations that provide free or subsidized therapy, grieving circles, access to mental health practitioners, and more. Making donations to these groups — like the Loveland Foundation or HealHaus — supports their work to make mental health care more accessible during traumatic news cycles like these.

You also don’t need to donate anything but time to make an impact. Per the Washington Post, every other state has a citizen’s arrest law similar to Georgia’s on the books. You can call your representatives to ask that it be repealed or weakened, just as Georgia’s was after Arbery’s killing came to light. Critics say these laws “have historically been used by white citizens to justify the killing of African Americans,” according to the New York Times. The mere existence of these laws provides cover for vigilantes, who may claim, as the McMichaels and Bryan did, that they were acting in self-defense in the context of carrying out a citizen’s arrest.

More like this
Watch Jacinda Arden’s Devastatingly Honest Resignation Speech
By Sam Ramsden
15 Black-Owned Liquor & Wine Brands To Add To Your Bar Cart
By Alexis Morillo
25 Inspiring Quotes From Black Women To Celebrate Black History Month
By Kyli Rodriguez-Cayro and JR Thorpe
Jessica Simpson On The Time She Was Pursued By A Backstreet Boy & An *NSYNC Member
By The Editors
Get Even More From Bustle — Sign Up For The Newsletter
From hair trends to relationship advice, our daily newsletter has everything you need to sound like a person who’s on TikTok, even if you aren’t.