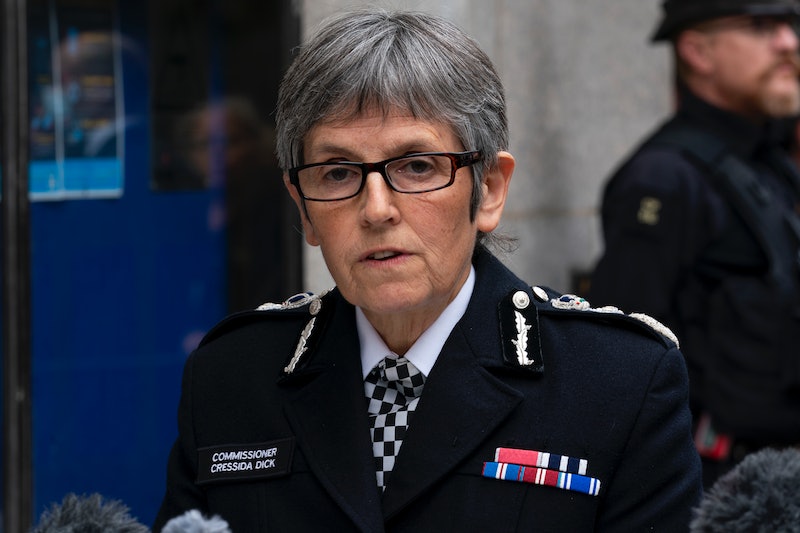 It’s been a long road for Metropolitan Police Commissioner Dame Cressida Dick. Since becoming the first female Metropolitan Police Commissioner in 2017, she has faced much criticism and been at the heart of some of the biggest controversies involving the Met, not least the tragic case of Sarah Everard, who was murdered by Met Police officer in March 2021. On Thursday, Feb. 10, Dick announced that she is stepping down from her role. And the social media reactions was immediate – and on point.

Per the BBC, her resignation arrives in the wake of a damning police watchdog report that found “disgraceful” evidence of misogyny, discrimination, and sexual harassment within the Metropolitan Police force. Though she had just said she had “absolutely no intention” of leaving her role, she issued a statement hours later saying the opposite. In it she said she had been left with “no choice” but to step down from her role following an intervention by London Mayor Sadiq Khan, who made clear that he was “not satisfied” with her response to the police watchdog report.

Reacting to her resignation, London Mayor Khan said he will now “work closely” with the home secretary to appointment a new commissioner and rebuild trust in the Metropolitan Police force. Meanwhile, Prime Minister Boris Johnson thanked Dame Cressida for serving the country with “great dedication and distinction over many decades.”

But really, social media is where the best reactions took place. Naturally, Twitter had a lot to say on the subject. Keep scrolling for the best memes and tweets about Metropolitan Police Commissioner Dame Cressida Dick’s resignation.

More like this
Here’s Where The NHS Nurses’ Strike Currently Stands
By Sophie McEvoy
Gen Z Are Twice As Likely To Identify As Queer, According To New Data
By Sam Ramsden
Matt Hancock’s TikTok Is The Most Matt Hancock Thing Ever
By Sam Ramsden
Twitter Has *A Lot* To Say About The "Single Penalty”
By Sam Ramsden
Get The Very Best Of Bustle/UK
Sign up for Bustle UK's twice-weekly newsletter, featuring the latest must-watch TV, moving personal stories, and expert advice on the hottest viral buys.