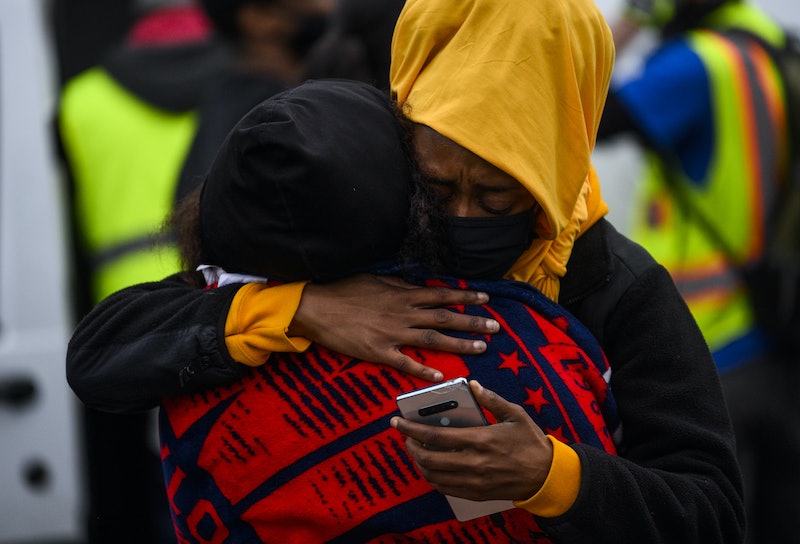 During an April 2021 traffic stop in Brooklyn Center, Minnesota, 20-year-old Daunte Wright was shot and killed by police, per AP News. The police pulled Wright, who is Black, and his girlfriend over around 2 p.m. on Sunday, April 11, allegedly for expired tags and because he had an air freshener dangling from his rearview mirror, per Wright’s family. The police shot Wright after determining that he had an outstanding warrant, per CNN, when Wright attempted to drive away.

Former officer Kimberly Potter, who is white, fired the fatal shot, testifying in court that she mistook her handgun for her Taser. The 49-year-old resigned from the police department in the days following Wright’s death, and was tried for first and second degree manslaughter. After 27 hours of deliberation, the jury in Potter’s trial found her guilty on two counts of manslaughter on Dec. 23, according to The New York Times. She will be sentenced in the weeks to come; per the Times, first-degree manslaughter carries a maximum penalty of 15 years in prison, and prosecutors have suggested they will ask for a longer-than-average sentence.

“Yet another Black life was taken by those sworn to protect, and we join the community in mourning Wright’s loss,” the American Civil Liberties Union of Minnesota (ACLU-MN) said in a statement at the time of Wright’s killing, calling for a swift and transparent investigation of the killing, including the release of all police body camera footage.

Protests for justice after Daunte Wright’s killing mounted in Brooklyn Center in the weeks following his death, with Wright’s mother, Katie Wright, appealing for calm. At the time, USA Today reported that protests over Wright’s death were met with police in riot gear, who fired gas and a chemical agent into crowds. At the time of Wright’s killing, the trial of Derek Chauvin, the police officer charged with the 2020 murder of George Floyd, was underway in nearby Minneapolis. (Chauvin was convicted of murdering George Floyd on April 20, 2021, just a few days later.)

It is still rare that a police officer is convicted for any kind of on-the-job misconduct, per a 2020 analysis of existing data by FiveThirtyEight. The verdict in Potter’s trial comes weeks after a series of other high-profile cases stemming from the events that sparked 2020’s widespread protests for racial justice concluded. On Nov. 19, a jury acquitted Kyle Rittenhouse, the teenager who traveled to Kenosha, Wisconsin, in the wake of the police shooting of Jacob Blake, and shot three protestors in the summer of 2020; five days later, on Nov. 24, a nearly all-white jury convicted three white men of the Feb. 2020 murder of Ahmaud Arbery.

If the Potter verdict makes you want to keep pushing for justice for Wright and other victims of police violence, continue reading for ways to make your voice heard.

More like this
Prince William Condemns “Unacceptable” Comments Made To A Black Guest At Buckingham Palace
By Shahed Ezaydi
The David Beckham Qatar Controversy, Explained
By Sophie McEvoy
The Indigo Girls Taught Me Queer Relationships Could Be Messy, Too
By Hannah Soyer
Here's How To Support Jewish People Amid Rising Antisemitism
By Hannah Orenstein
Get Even More From Bustle — Sign Up For The Newsletter

This article was originally published on April 12, 2021