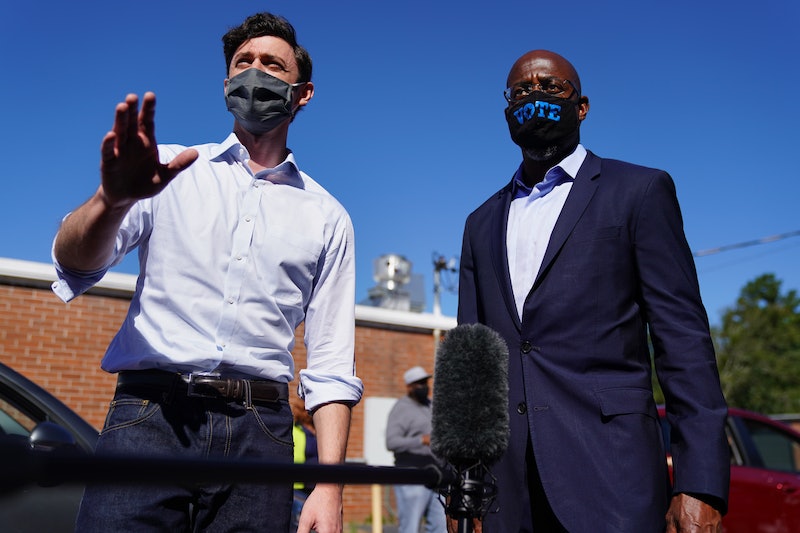 In just one December day, Ellen, 27, spoke with three suburban Georgia voters who said they hadn’t planned on voting in January’s Senate runoffs. But when the first-time canvasser working with Planned Parenthood Votes told them how this election could affect abortion access, they said they realized it’d be “worth it” to go out and vote — for the Democrats.

Runoffs, like any nonpresidential election, are typically a hard sell for more casual voters. This is especially true in Georgia, where Democrats have a long history of losing in runoffs. It doesn’t help that the Republican incumbents, Sens. Kelly Loeffler and David Perdue, have been outspending their challengers, Rev. Raphael Warnock and Jon Ossoff, by around 55%.

But organizers — particularly millennial women — have reason to believe that, just as Georgia swung blue in November over issues like reproductive rights, voters will turn out in January, tipping the balance of the Senate in the process.

“The Georgia shift is being led by young people and young women especially,” says Lela Ali, the Georgia director of the Movement Voter Project (MVP), which connects progressive national donors with local grassroots organizations. “Black, brown, immigrant women, and folks who are nonconforming are leading this work and have been leading this work,” she says.

"Folks have a deep understanding of what this win could create."

Runoffs are notoriously difficult to poll for, but there are already signs that progressive organizing is bearing fruit: 76,000 new voters have registered since the November election, 65% of whom are younger than 35, and as of Dec. 18, more than 1.1 million people had already voted in Georgia. (At the same point in the general election, 1.2 million had already voted, the Atlanta Journal Constitution reports.) Further, Republican strategists have been concerned about the effect that President Trump’s continued (debunked) claims of mail-in voter fraud could have on this election.

Ali, herself a millennial woman, started to notice an uncharacteristic push around this runoff the day after Election Day. She was getting nonstop calls from people outside of Georgia asking how they could help and volunteering to drive to the state ASAP to canvass or drop literature. This kind of support has allowed MVP’s partner groups to canvass more than 1,000 doors a day, per Ali, with a plan to reach 3.8 million voters before Election Day on Jan. 5. “Folks have a deep understanding of what this win could create,” she says, referencing President-elect Joe Biden’s ability to push through policy with a Democrat-majority Senate.

Similarly, Planned Parenthood Votes has sent nearly 230,000 texts to voters as of mid-December, with a contact rate — aka the number of people who reply to a message — that’s nearly double what was expected. (The organization declined to share that exact percentage, citing proprietary strategy.)

The unprecedented enthusiasm around voting, particularly for Democrats like Warnock and Ossoff, “confirms for me that moderating on issues like abortion doesn’t win races,” says Barbara Ann Luttrell, a spokesperson for Planned Parenthood Votes. Warnock campaigns as a “pro-choice pastor” where Ossoff puts health care top of his priority list; these openly espoused views have been ripe fodder for attack ads painting the candidates as radical.

But these groups aren’t just connecting with those who identify as super lefty. Meghan, 35, is a communications professional and mother of two who moved a year and a half ago to the same Cobb County neighborhood where Sen. Perdue used to live. A number of Republican canvassers have knocked on her door in the last month, and a neighbor even slipped a letter into her mailbox urging her to vote for the incumbents. Though she’s since put Ossoff and Warnock signs in her yard, she thinks the amount of action she’s seen from conservatives in her neighborhood “illustrates the very real chance Democrats have to flip the state.” (Again.)

Meghan plans to vote based on protecting reproductive rights, dismantling systemic racism, and prioritizing public health, but that’s not all. “Gun control, climate change, immigration — it’s hard to point to a single most important issue in this election because they all feel dire.” She says her views feel emblematic of the shift happening in her community, which voted Republican in both the 2008 and 2012 generals, and where former Republican Rep. Karen Handel beat Ossoff by six points in a 2017 special election. This summer, local teenagers organized a Black Lives Matter protest in front of the area Trader Joe’s — the same spot where, on Nov. 7, Meghan’s family stood with a masked group of people celebrating Biden’s win for more than an hour, cheering passing motorists. “We got far more honks than we did discouraging words,” she says.

The enthusiasm extends from the suburbs to college campuses. Victoria, 19, attends Emory University in Atlanta. A West Coast native, she’d been trying to get other students to switch their voter registrations from their home states to Georgia to vote in the runoffs. (It’s perfectly legal to switch your voter registration to your current address, no matter how long you’re living there, as long as you actually live there.)

“The runoff is at a weird time, since it’s when students are at home during the semester break and with their families, not on campus,” she says. With voter registration now closed, she’s now following up with people to make sure they return their absentee ballots on time. (Victoria herself is playing “nonstop phone tag” with the Board of Elections office, since she hasn’t gotten her absentee ballot yet.)

But no matter the outcome — and the outcome matters a lot — this enthusiasm is setting the groundwork for future momentum in the state.

“As ... a young woman, I have experienced being in educational and professional spaces and being devalued,” says Ali. “We have to cherish women, respect and listen to and honor the experiences of women — Black women, non-Black women of color, mothers, students, young people ... not just at the political level, but in the systems we navigate as organizers across the country,” she adds. “The work being done goes beyond election seasons.”