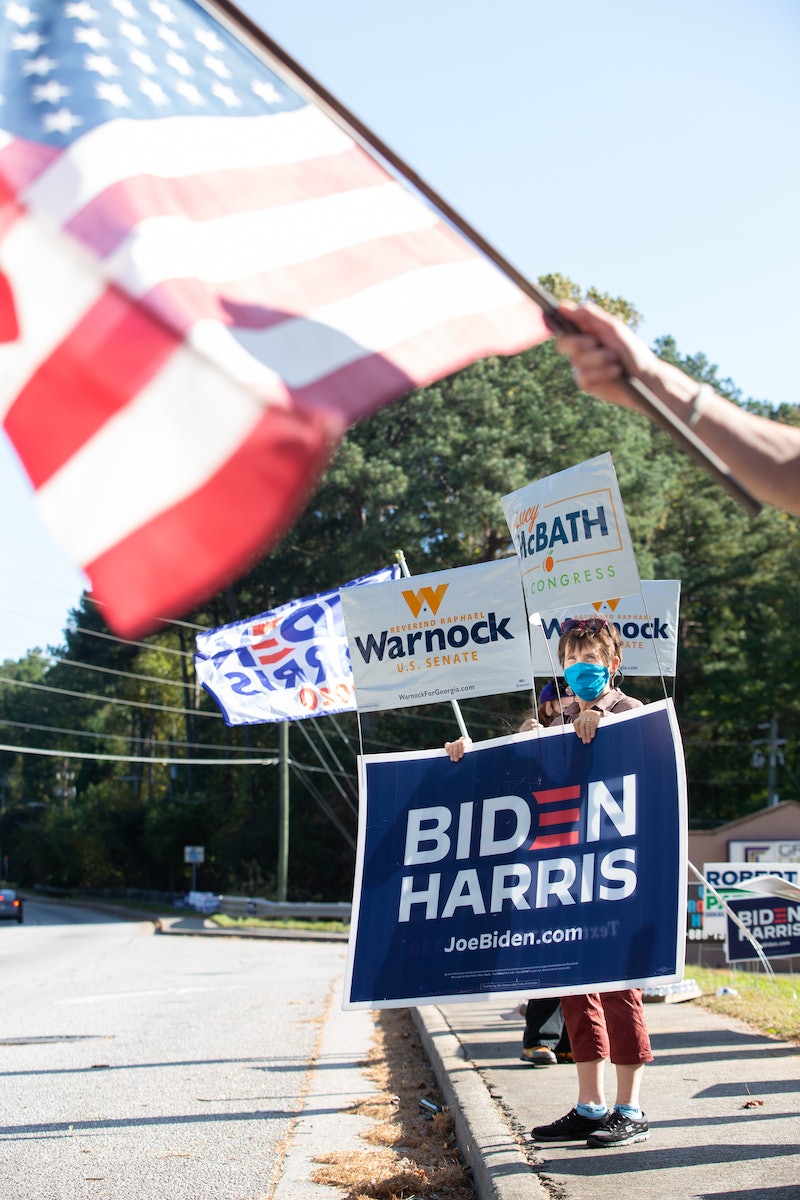 President Donald Trump and former Vice President Joe Biden aren’t the only options on the ballot this year. Election-watchers will also be anxiously waiting to find out if Georgia can really be a swing state. The Peach State has consistently voted for Republican presidents since the ‘70s, with exceptions for Southern Dems Jimmy Carter and Bill Clinton. But experts believe Georgia has a real shot at flipping in 2020, thanks to younger and more diverse voters.

One organization leading the battle to turn Georgia blue is Planned Parenthood Southeast Advocates (PPSEA), which has led get-out-the-vote efforts for Democratic candidates up and down the ballot. They are out to prove that Georgia voters care deeply about progressive issues, including abortion rights, indisputably at risk following the death of Supreme Court Justice Ruth Bader Ginsberg.

“I cannot emphasize enough how much reproductive rights and abortion rights specifically have played into [...] turning Georgia blue,” says Barbara Ann Luttrell, a spokesperson for Planned Parenthood Votes in Georgia.

Luttrell has been out in the field, talking to voters about how a second Trump term could impact Georgians’ daily lives. Meanwhile, Staci Fox, president and CEO of PPSE, has been crisscrossing Georgia, Alabama, and Mississippi with the Biden/Harris campaign and local candidates to help communicate what’s at stake for Americans this year.

Bustle spoke separately with Fox and Luttrell about what fighting for Georgians’ reproductive rights means for the future of American politics, no matter which way the state swings.

Bustle: What has trying to flip Georgia blue looked like?

BAL: The campaigning to turn Georgia blue began years ago. Georgia made incredible strides in 2018. Then in 2019, Georgia passed its six-week abortion ban by only one vote. This led to a cascade of more than 25 bans passed across the country. There had been momentum building, but that ban in 2019 became a major milestone for energizing voters.

We knew Georgia would be in play this year, but we didn’t know it would be in a pandemic. Going virtual allowed us to get creative — we can reach so many more people digitally than on the ground. We’ve been calling people, ensuring they’re registered to vote, and explaining that their vote is for more than just the president. We made sure people understood that the incumbent lawmakers on their ballots were the people who voted to ban abortion in Georgia.

SF: The momentum in Georgia started down-ballot up. Since 2016, there have been a number of times when leaders didn’t listen to their constituents, on the federal and state levels. Senators David Perdue and Kelly Loeffler are prime examples — both profited off the pandemic instead of helping Georgians. The first thing Loeffler did was co-sponsor three different anti-abortion bills. When we say elections have consequences, it means there are consequences for officials’ actions — and accountability for the officials themselves.

Because we were embroiled in the abortion ban battle last year, we all locked arms long before the pandemic. We saw that we could flip the statehouse here — instead of people like Perdue and Loeffler, who President Obama called “the dynamic duo of doing nothing,” we can send someone to Washington who grew up in affordable housing in Savannah, went to an HBCU, and has led one of the most important churches in our country or someone who’s fought corruption his entire career. This is coming full circle on Election Day.

How have abortion rights played into this work?

BAL: 2019 significantly shifted the conversation. Previously, the anti-abortion movement’s strategy was to chip away at abortion access with TRAP laws, without saying they wanted to ban it outright. But in 2019, people saw how they really needed to hold lawmakers accountable to prevent bans. Even though folks have always supported reproductive rights here, it wasn’t the issue that defined their vote. That has changed.

What kinds of voters have you met on the ground? What have been some of the most memorable moments from 2020?

SF: There are two segments of voters I have encountered the most this cycle. First is the young voter. I hate to say that it had to get this bad for people to feel engaged, but maybe it did. Between the pandemic, this intense period of racial unrest, the climate crisis, and the systems of oppression we’re facing, young voters are leading the movement. You have to see yourself in the movement around you — that’s what representation is. And young voters are turning out in unprecedented numbers.

The other group of voters I’m seeing are Republicans who feel that the GOP has become a cult of racist, sexist, xenophobic people whose preferred method of leadership is intimidation. Georgia Gov. Brian Kemp ran campaign ads where he pointed a gun at another human being. We’ve gotten to a place where people have had enough with the deception and obstruction. In my day-to-day campaigning, I have met more young voters, because those are the bulk of [Planned Parenthood] supporters, but suburban white women have really turned. They think it’s not OK to lead by hate and oppression.

BAL: At the end of early voting, a couple of young women walked over to one of our organizer’s tables that was set up with Planned Parenthood-branded materials. They sort of sighed and said, “What have they done now? What do we need to protest?” It just really conveyed the sense of fatigue Georgians are feeling.

What's missing in the national conversation about Georgia?

SF: That this isn’t a new movement. People so readily discount the South, but if they’d been paying attention to when thousands of people hit the streets for the Women’s March, then after Jon Ossoff ran his first race or Stacey Abrams ran for governor, they would have seen this coming.

BAL: I am keenly aware that we are tagged as a red, anti-abortion state. But that’s not what the people of Georgia believe. The voter suppression in the state has only served to mobilize a voting population that’s more in line with the overall population — one that’s skewing younger, with more people of color voting than ever. The attacks on people of color, on immigrants, on our voting rights, on our reproductive rights have mobilized people like never before. They’re tired.

What has this election cycle taught you about how voters feel about the future of reproductive rights?

SF: Even if people don’t share my beliefs, I kept hearing people on the campaign trail say, “I want politicians out of my healthcare.” People know that politicians aren’t medical experts. Georgians want our politicians to focus on the economy and the state of healthcare. We have rural hospitals closing, pregnant women dying at higher rates.

BAL: Folks now understand that the alarm bells we were ringing about abortion were not hyperbolic. If we don’t speak up to protect reproductive rights, they won’t be safe. We were one of the first states to pass an abortion ban, then we saw that cascade across the country. And now we can look to Georgia to see to what extent that has mobilized people. I’ve never had more confidence in the voting bloc or in folks’ enthusiasm and energy around this issue.