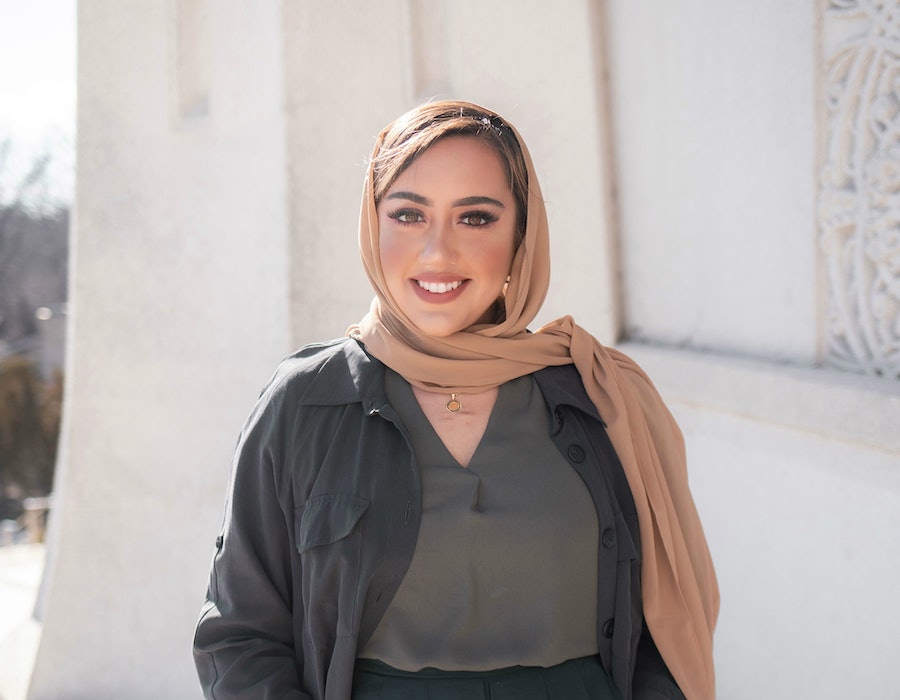 One of President Joe Biden's first executive actions was repealing the 2017 Muslim ban. To Bushra Amiwala, the youngest Muslim elected official in the country, it was a first step toward eradicating stateside Islamophobia. ﻿“I was thrilled to see that [Biden] kept his campaign promise,” says the 23-year-old, who serves on her Illinois school district’s board of education.

“It was embarrassing for our nation. … [And] there were around 41,000 visas that had been declined,” she says, noting that Muslims still face overwhelming systemic discrimination.

Born and raised in the Evanston suburbs, Amiwala has known since her early teens that she wanted a life of public service. “I was involved in five different nonprofits, five days a week," she tells Bustle. "I was told the best way to make long-term, practical change was through public policy.” In 2018, she ran unsuccessfully for the Cook County Board of Commissioners as a freshman at DePaul University. Six months later, she ran for office again and won her current seat.

This month, she’s collaborating with World Hijab Day, which aims to raise awareness of Islamophobia by calling on non-Muslims to wear a hijab on Feb. 1. The movement uses the hashtag #endhijabphobia to spread awareness. Amiwala talks to Bustle about Muslim inclusivity, handling defeat, and how she practices self-care.

What challenges have you faced as the country’s youngest Muslim official?

There are inherent challenges that come with being the youngest of anything. As a Muslim woman elected to public office, I represent more than the constituents in my district. I also represent Muslim women as a whole, [because] I may be the first Muslim some people meet in their life. I’ve handled those hurdles by staying true to my faith, which is a part of me and has kept me grounded. Another critical thing is surrounding myself with people who believe in me and my message.

You’ve been involved with World Hijab Day since it launched in 2013. What should people know about it?

For one, I’m involved because I wear a hijab, which is an Islamic head covering that represents modesty. Nazma Khan founded World Hijab Day to educate people on its importance and as a way to say, “Hey, we can wear what we want. We can practice whatever religion we want. We, as women, can be whatever we want to be.” So, I celebrate it proudly because I love my religion, I love who I am, and what I represent. I spread awareness to dispel any notion that we’re somehow different because of it.

You prioritize empathy toward others. How can people be more empathetic to the Muslim community?

Ask a Muslim. Simple. When I worked on [Illinois Republican] Sen. Mark Kirk’s campaign, I found many people had never met a Muslim person before, and had preconceived notions and beliefs [about us]. It’s a practical step that could break down stereotypes and negative associations that people may have toward our community.

As an elected official, a woman, and a Muslim, do you deal with impostor syndrome or self-doubt?

Everyone has some kind of self-doubt. I’ve been intentional in working through it, understanding that it's a part of self-growth, [and] being open about it with my mentors.

What’s in your self-care toolkit?

First, it involves taking a shower in the morning. In the evenings, I always try to get in a quick run after sitting all day at work. Taking care of my skin soothes me and allows me to chill out — I'm big on face masks. I love optimistic people, people who share words of affirmation and have kind, genuine hearts. They fill me up. And water. I drink lots and lots of water. It makes me feel good knowing I’m prioritizing my health from the inside out.