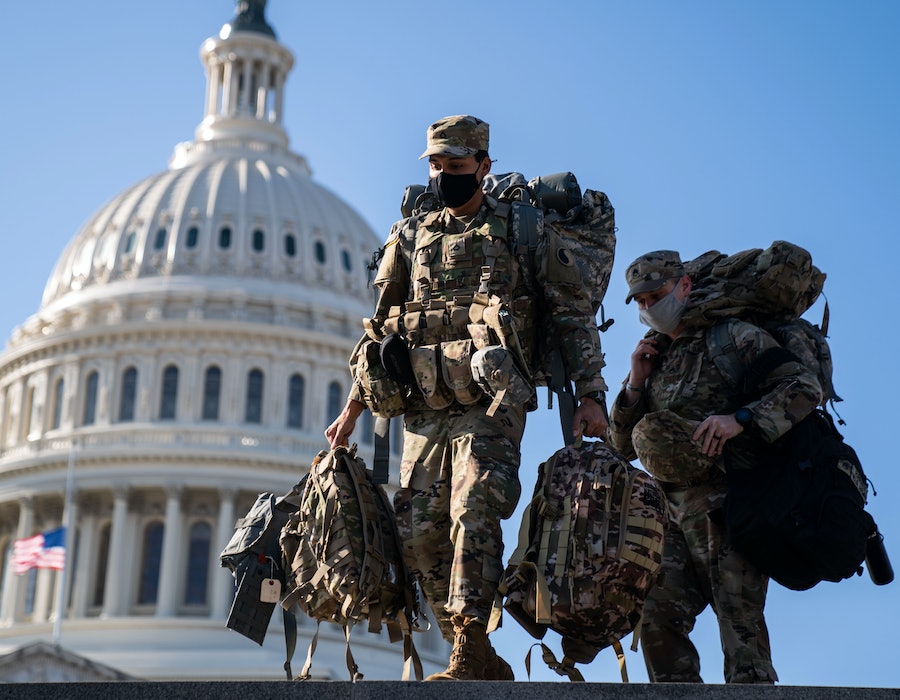 Like many Americans, Janeen Birckhead started her Jan. 6 workday from home. A self-described news junkie, the Maryland resident multitasked, with one eye on her job as a senior advisor at the Department of the Interior, and another on the U.S. Capitol, where lawmakers were certifying election results. As the day progressed, her attention pivoted to D.C. Eventually, like many Americans, she couldn’t tear her eyes from the TV. Confederate flags flew down the hallowed halls of America’s legislative headquarters. Not even during the Civil War had the symbol of the Confederacy made it to the grounds of the Capitol.

Certainly this would get under control quickly, Birckhead thought to herself. But it didn’t. So, unlike many Americans, she called up her command sergeant major. “I said, 'Are you seeing this?'” Birckhead tells Bustle. “We both were very quiet on the phone, because we were taking it in, shocked.”

Birckhead is a brigadier general in the U.S. National Guard, for which she oversees thousands of troops and leads special task forces. According to data from the Pentagon, just 8.9% of generals within the Guard are women. On Jan. 12, Birckhead was deployed to D.C. alongside a reported 25,000 National Guard members to protect the nation's capital for Inauguration Day. As the Task Force Capitol commander, she led 14,000 troops and coordinated with Capitol Police, Secret Service, and FBI members to secure the grounds around the Capitol Building.

Even after a year of historic National Guard deployments for COVID-19 support, most Americans aren’t used to seeing troops line their streets. The troops aren't used to it either. Being a member of the Guard is usually a part-time job. When members are deployed, they take military leave from their civilian jobs. “This was something out of the ordinary and extraordinary,” says Birckhead, who joined the National Guard in the early '90s. “I would be disingenuous if I didn't say I was truly shocked [when I arrived in D.C.]," she says. "To walk the grounds with the Capitol Hill police, hearing a firsthand account of what happened, that was jarring."

From the Capitol Police station in D.C., she spoke to Bustle about the insurrection, how she boosted morale, and the reality of serving as a Black woman. (Birckhead has since returned to Maryland to work on a new mission: equitable distribution of the coronavirus vaccine.)

Walk me through a typical day on Capitol Hill.

I start my day around 6 a.m. at the police department. The [U.S. Capitol Police] were gracious to give us space. I have what we call a CUB [Commander’s Update Brief] — a stand-up with my senior leaders. I take another meeting, and then I'm out on the grounds, making sure that the soldiers have what they need. At the end of the day, my team sits down [for] a sync session about what happened during the day and what needs to be done. We’re there until pretty late in the evening, making sure we’re prepared for the next day.

As a member of the National Guard, you've been activated for COVID-19 operations, from food distribution to testing operations. What went through your mind when you found out you’d be switching gears to work the inauguration?

Being in the National Guard, our soldiers are ready to go at a moment's notice. We'd been in [COVID operations] for several months, so everyone was at a heightened state of readiness. Even though what we were watching was shocking and sad, it wasn't a surprise.

What conversations have you had with your family about this?

I have children who are young Americans, young adults. My kids are both interested in policy and politics, so it made me feel good as a mom to have those discussions and [reassure] them, "Everything's going to be fine. This is going to be a peaceful transfer of power." As a mom, I'm pleased that I was right. They can be assured that they're safe in our country, that opportunities for them are still there. As they look at the new vice president, as they look at the Cabinet, they can be heartened that democracy continues.

What have things been like on the ground in D.C. recently?

Every night, I'm on the line — visiting with soldiers, ensuring they have what they need, paying attention to things like [the weather]. I will tell you that morale has been high with the soldiers.

How have you felt about the coverage the National Guard is getting?

I don't think the public really realizes how much time, effort, and commitment it [takes] to be a member of the National Guard. The soldiers are professionals. They have day jobs. They've left those jobs to come perform this duty.

How did you come to join the National Guard?

I attended Hampton University, a historically Black university, and studied political science. I was a four-year ROTC scholarship cadet. That [started] with my mom saying, “Hey, you should do this.” And I'm thinking, “Why, Mommy, why would I do that?” (I call my mom "Mommy.") She encouraged me. My dad was former Navy. My grandfather was former Army. Throughout my family, there's a heavy military presence, so it wasn't out of the ordinary. What was extraordinary is that I was able to make it to the rank of brigadier general.

What's it like serving as a woman of color?

I had diverse mentors, like Major General Linda L. Singh. Seeing what she accomplished, this Black woman, helped set my path. It gave me fortitude to do this job these last two weeks. You asked me about preparation. During the Freddie Gray [unrest], I watched General Singh, how gracefully she stood there [in 2015], held the press conferences, and took criticism. So when called upon to [serve at Capitol Hill], I called General Singh. She was like, “You got this Janeen, you got this.”

The National Guard is still activated in many states for COVID-19 management. Are you tired?

There's a long journey ahead of us. Our governor [Larry Hogan] is leaning forward to ramp up COVID operations, and he wants to use the National Guard. I'm sure that a lot of my soldiers will help perform those missions. We're probably going to be doing this for a bit longer.

So, how do you unwind?

When I get back to my room, I pick up my field Bible, and I read a few psalms. That's certainly a refuge for me after trying days, regardless of how tired I am.