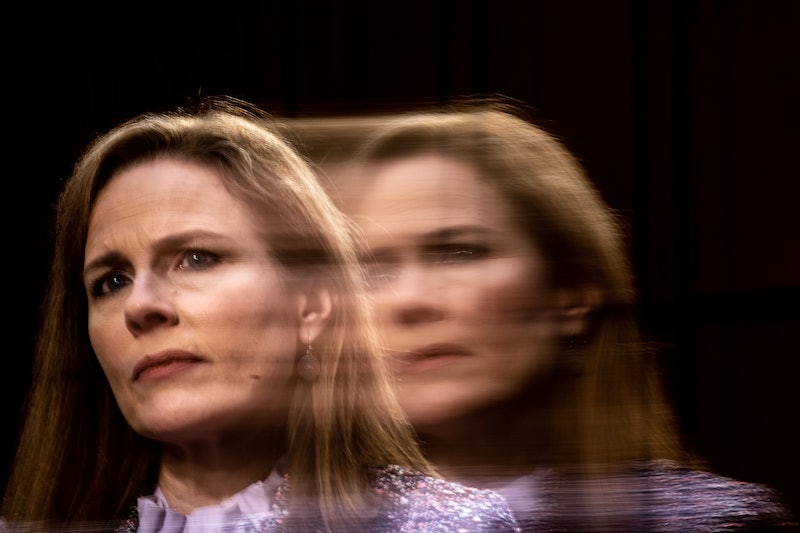 On Oct. 26, the U.S. Senate voted to confirm Judge Amy Coney Barrett to the Supreme Court. What does that mean for America? Coney Barrett holds a conservative interpretation of the law and gives conservatives a 6-3 majority on the high court. And while it's impossible to predict how someone will judge — Justice Gorsuch, after all, has sided with the court's liberal members on issues of Native American sovereignty — her previous statements can offer clues as to how she'll act.

In the next month alone, SCOTUS will hear oral arguments on issues concerning Obamacare, immigrant rights, and LGBTQ+ discrimination. Here's where she stands on those topics.

On Nov. 4, the day after Election Day, the Supreme Court will hear oral arguments for Fulton v. City of Philadelphia. The case could determine whether private agencies that receive taxpayer funding for government services, such as foster care providers, can deny services to people who are LGBTQ+, Jewish, Muslim, or Mormon.

In her Senate Judiciary Committee hearings, Coney Barrett was scrutinized for her use of the term “sexual preference” when discussing the 2015 decision in Obergefell v. Hodges, which granted marriage rights to same-sex couples. She later clarified, saying, "I certainly didn't mean and would never mean to use a term that would cause any offense in the LGBTQ community. If I did, I greatly apologize for that.” And while she wouldn't explicitly state her opinion regarding the Obergeffel decision, her views often align with the late Justice Antonin Scalia, who dissented.

Outside of her professional career, she's been criticized for her ties to anti-LGBTQ+ organizations. According to the Associated Press, for nearly three years she served on the board of private Christian schools, which didn’t admit children of same-sex parents or allow openly gay and lesbian teachers.

A few days later, on Nov. 9, the court will hear arguments for Niz-Chavez v. Barr, which deals with the "stop-time rule." When a non-citizen has lived in the U.S. for 7-10 years, they can be eligible for "relief from removal," meaning they can't be deported. The time-stop rule allows courts to stop them from accruing time by sending them "notices to appear" in court — sometimes without any specific information. SCOTUS is tasked with deciding what information is necessary to start the time-stop rule.

According to a nonpartisan watchdog group, Accountable.us, Coney Barrett ruled against immigrants in 88% of her cases on the 7th circuit, siding instead with business or government. In a June dissent, she sided with the Trump administration, who wanted to block immigrants who didn't meet a "wealth test," meaning they could end up needing public assistance, such as Medicaid or food stamps.

During her hearing, she declined to say whether she thinks it’s wrong to separate migrant children from their parents. “That’s a matter of hot political debate in which I can’t express a view or be drawn into as a judge,” she said. “I’m not expressing assent or dissent with the morality of that position. I just can’t be drawn into a debate about the administration’s immigration policy.”

A few days later, on Nov. 10, SCOTUS will hear oral arguments for California v. Texas. The case deals with the Affordable Care Act’s requirement that Americans buy insurance or else pay a penalty. The justices are asked whether that mandate is constitutional. If it is ruled unconstitutional, the law could potentially be overturned, leaving millions of citizens uninsured.

In the past, Coney Barrett has criticized the ACA, known as Obamacare, like when she signed a petition against mandating employers to provide access to birth control. In 2017, she wrote that Chief Justice John Roberts "pushed the Affordable Care Act beyond its plausible meaning." Despite this, she told senators on Oct. 13 that she is “not hostile to the ACA.”

Editor’s Note: This article was updated at 8:20 p.m. ET to include the news that Judge Amy Coney Barrett was confirmed to the Supreme Court.

More like this
For These Abortion Clinic Volunteers, Going TikTok Viral Is A Risk Worth Taking
By Audra Heinrichs
Windrush Victims Are Still Waiting For Compensation
By Sam Ramsden
Boris Johnson’s Leadership Is In Question – Again
By Bustle UK
The UK Abortion Laws In 2022, Explained
By Sophie McEvoy
Get Even More From Bustle — Sign Up For The Newsletter

This article was originally published on Oct. 26, 2020