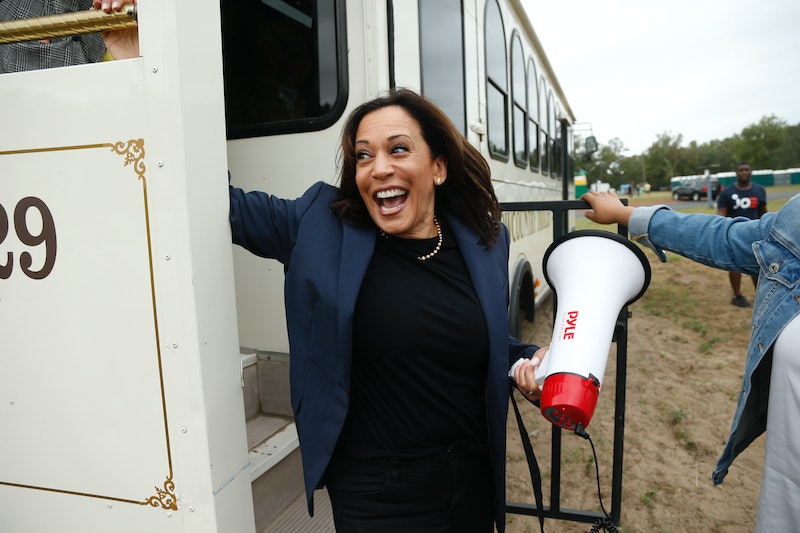 In May 2012, then-Vice President Joe Biden sat down with NBC's Meet The Press and voiced his personal support for same-sex marriage. The announcement was unplanned and unscripted. President Barack Obama had yet to make a similar statement, and the president's top campaign aides were furious, as they were just six months out from the general election. The Washington Post's Dana Milbank called the "gaffe" a "mess for the White House." The New York Times reported that the statement was "likely to intensify pressure on Mr. Obama, who says he is still wrestling with his feelings about same-sex marriage."

Indeed, just three days later, Obama told ABC News, “I think same-sex couples should be able to get married.” Mission accomplished. Biden had, it seemed, forced the president's hand. Now, as Biden's own vice president-elect, Kamala Harris is likely to play a similar role. She and Biden have many different policy views, and she's widely considered one of the most liberal senators — if not the most liberal. Could she pull Biden, a centrist, to the left?

When I interviewed Biden for my book First in Line: Presidents, Vice Presidents, and the Pursuit of Power, he talked about his written agreement with Obama about their partnership. He wanted “to be the last guy in the room," and he told me he meant it "literally, not figuratively.” Unlike Al Gore, who'd had a specific portfolio of issues to focus on, Biden wanted to “be involved in everything.” Harris has described her arrangement with Biden similarly: "What I will do, which is what Joe wants me to do, is share my lived experience to any issue that we confront," she said in a 60 Minutes interview last month, as "a Black child in America, who was also a prosecutor, who also has a mother who arrived here at the age of 19 from India.” (Whether or not she has a similar written agreement hasn't yet been reported.)

Her beliefs, formed by her experiences, are in support of legalizing marijuana on a national level, the Green New Deal, and Medicare for All, which she co-sponsored in the same-named 2017 act with Sen. Bernie Sanders.

Biden, to put it lightly, has not embraced these policies. His climate plan is inspired by the Green New Deal and adopts its target of 100% clean electricity by 2035, but isn't as expansive. He advocates expanding the Affordable Care Act, which he helped pass through Congress, rather than scrapping it for Medicare for All. And there are no signs he'll seek to legalize marijuana.

Could Harris move the needle on those issues? It's possible, and there's precedent for it. Just as Biden brought Obama left on gay marriage, Dick Cheney pulled President George W. Bush to the right, particularly on matters of hawkish foreign policy. On Saturday, Nov. 7, after major news networks projected Biden and Harris as the 2020 winners, they talked on the phone. “We did it,” she said in a congratulatory call. “We did it, Joe.” Notice the “we” here. She knows and acknowledges that she's partly responsible for his victory — and likely will be using her voice in the coming years.