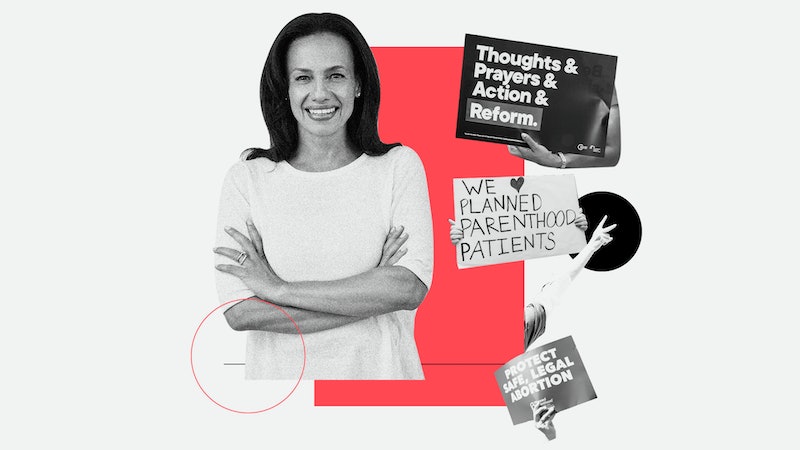 About 10 years ago, Alexis McGill Johnson was walking through New York City’s SoHo neighborhood, scrolling through Instagram, when a billboard caught her eye. It featured a young Black girl in a pink smocked dress, her hair adorned with a bow, the kind of child whose face is used to sell things. McGill Johnson, a native New Yorker, was pulled in. The words atop the picture read, “The most dangerous place for an African American is in the womb.” It was a billboard paid for by Life Always, the Texas anti-abortion group. The 4-year-old wasn’t selling clothes or music, she realized. She was selling anti-choice ideology.

A few weeks later, she found herself at a Planned Parenthood dinner party seated next to then-president Cecile Richards. At the time, she was leading the Perception Institute, an anti-discrimination think tank. McGill Johnson brought up the billboard. “What could Planned Parenthood do?” she asked. She was frustrated by the racism, she told Richards, and the demonization of Black women’s reproductive choices. Richards recommended that she join Planned Parenthood's board.

She did just that, serving on the board for 10 years, including a two-year stint as the board's chair. When Planned Parenthood cut ties with Richards’ successor last July, Baltimore physician Dr. Leana Wen, McGill Johnson was asked to serve as interim president. During her brief tenure, Wen was criticized for prioritizing the organization as a health care provider, rather than as a political advocacy group, among other things. McGill Johnson has taken a markedly different stance.

“Seventy-seven percent of Americans believe that Roe should be the law of the land, but a vocal minority controls the levers of power,” says McGill Johnson, who oversees a central staff of 550 people, plus their 600 affiliate health centers and 2.4 million patients nationwide. “Planned Parenthood is first and foremost a health care provider, but we also have to defend the health care we provide.”

On June 26, nearly a year after her interim appointment, the PPFA board of directors voted for McGill Johnson's permanent appointment as president and CEO.

The news comes at a pivotal moment. Before month's end, the Supreme Court will issue two landmark reproductive rights decisions: June Medical Services LLC v. Russo will determine whether abortion providers must have admitting privileges at local hospitals, and the consolidated cases of Trump v. Pennsylvania and Little Sisters of the Poor v. Pennsylvania will establish whether employers can deny contraception coverage to employees without providing a workaround. Meanwhile, protests continue to sweep the country demanding racial justice following the deaths of George Floyd, Breonna Taylor, and Ahmaud Arbery.

In other words, as that SoHo billboard made clear, the fights for reproductive and racial justice are inextricably linked.

“It’s powerful for Planned Parenthood to be headed by a Black woman in this moment,” McGill Johnson says over the phone from her New York City apartment, where she’s been self-quarantining with her husband and two daughters, ages 8 and 11. We speak first in mid-May, a week before George Floyd’s death. The essential workers during the COVID-19 pandemic are on her mind — the hypocrisy that their bodies are deemed essential, McGill Johnson says, and yet they’re unable to control reproductive decisions for their bodies. When we speak a few weeks later, I ask how she’s doing. “I am horrified and I am energized,” she says.

“The reproductive justice movement was founded by Black women 25 years ago,” she continues. “We need a movement that includes the right to parent, the right to not have your child murdered at the hands of state violence. What we saw with Ahmaud Arbery, with Christian Cooper, with George Floyd is the fight to ensure that the humanity and dignity of Black people’s lives are valued. And it’s where we have had to push the reproductive rights movement to step in boldly. Many [of our] patients are living at this intersection.”

Right now, that largely involves amplifying the voices of groups led by Black women, she says, who insist it’s impossible to silo off abortion access, maternal mortality, and access to health care from the issue of race.

The day before our first call, news broke that Norma “Jane Roe” McCorvey was paid off by the anti-abortion movement after being a plaintiff in the Supreme Court’s Roe v. Wade case. “It doesn’t surprise me at all,” she says of the news. “It’s a very clear strategy they’ve been using for decades. They try to take ex-Planned Parenthood providers and flip them. It does surprise me that she was clear she was selling people out for a check. Selling out freedom for a check? It’s the worst kind of being. There’s a special place for folks like that.”

McGill Johnson was born in 1972, a year before Roe v. Wade’s decision. “I grew up marching,” says the early activist, whose birth year was cradled between the second-wave feminist and Black Power movements. “My parents were professionals by day and organizers by night.” Over the past few weeks, she and her mother have spoken over the phone, sharing new stories of marching — McGill Johnson from the Big Apple, her mother from Atlanta, Georgia.

“The marches I’ve been in center on anti-Blackness in a way that I find really powerful. I feel a liberatory vibe these days, a feeling of what freedom could look like," says McGill Johnson, who sees Black Lives Matter as a response to the history of colonialism, capitalism, and the Atlantic slave trade. “There’s so much amazing leadership emerging right now. This is a leaderful generation, and that’s badass.”

What you saw with Floyd’s death was eight minutes and 46 seconds of the most cavalier and diabolical racism. It was so egregious, and laid plain.

After a stint in academia, teaching in the Political Science and African American studies departments at both Yale and Wesleyan Universities, McGill Johnson worked for hip-hop labels like Sean Combs’ Bad Boy Entertainment, where she helped launch its political advocacy and voter mobilization arms. In 2009, she founded the Perception Institute, a New York-based think tank of researchers and strategists working to translate research on race, gender, and identity into solutions to reduce bias and discrimination.

“When I started this work around race, the question was, how do we transform the perception of Black men in American minds, from educators to police officers to doctors?” she says. “What you saw with Floyd’s death was eight minutes and 46 seconds of the most cavalier and diabolical racism. It was so egregious, and laid plain. It made people really understand, ‘Oh, that’s what actually is happening to us.’”

When McGill Johnson took over last July, her summer was upended. She had no child care for her daughters and had to bail on scheduled family vacations. “My kids went with my husband on the trips I was supposed to be on too," says McGill Johnson, who didn’t see her daughters in person for almost a month. (Her husband, Rob Johnson, is the president of the Institute for New Economic Thinking.) When they finally reunited over Labor Day weekend, her older daughter presented her a hand-drawn picture and a note. “Dear Mommy, I saw you on Rachel Maddow," she wrote. "That was so cool. You’re doing an awesome job. I know you’re not going to be around a lot for the next year, but that’s OK because I know you’re helping people.”

“It melted me,” McGill Johnson says. “She may not understand the work, per se, but she understood that [this job] was so important.”

"I cannot think of a better person to be leading Planned Parenthood at this moment," says Cecile Richards, who last year cofounded Supermajority, a women's political mobilization group. "To last as a movement leader, you have to find joy in the work. Alexis finds joy, and it inspires others. She doesn't have a bigger cheerleader than me, and I hope she stays for a long, long time."

“We need to align our messaging to vote these people out," she says of the Trump administration. "America’s the land of the free? That hasn’t been realized for centuries.”