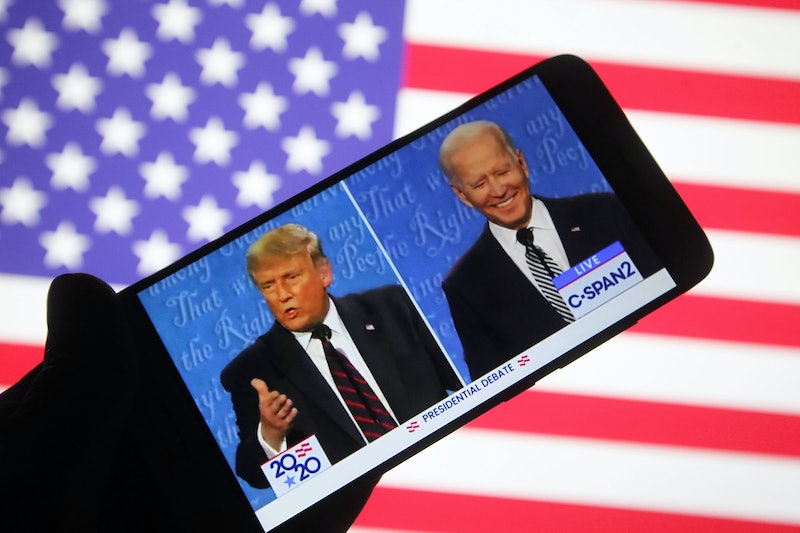 With just 12 days left until the general election on Nov. 3, President Donald Trump faced off against former Vice President Joe Biden in the final 2020 presidential debate. It's the second time the two candidates debated publicly, after Trump refused to adapt with the Commission on Presidential Debates, which wanted to hold the second debate virtually as a COVID-19 precaution. (Both men then scheduled separate town halls for that evening instead, Trump with NBC News and Biden with ABC News.)

The final debate, moderated by NBC News’s Kristen Welker, also faced new rules following Trump and Biden's Sept. 29 meeting. During each candidate's first response to a new question, slated at two minutes, their opponent's mic was muted. The muting came as a response to constant interruptions in the first debate, mainly from the president. “I think we're going to see a different tone this time around,” Martha MacCallum, an anchor and executive editor of The Story on Fox News, told Bustle earlier this week. “Two minutes is actually a pretty long time.”

Fortunately, while the candidates were muted, Twitter was not. Celebrities and pundits alike flooded to social media to react in live time. Below, a roundup of posts, some alarmed and others downright annoyed at the political madness.

Gay responds to President Trump, who claimed that many heads of state had congratulated his response to the COVID-19 pandemic.

The bestselling author of To All the Boys I've Loved Before joins the club.

Petri responds to Trump's thoughts on wind power: "It's very expensive. It kills all the birds," he said.

Fox similarly comes to the defense of wind power.

Carden, who stars in The Good Place, shares a photo.

In response to the president calling New York City "a ghost town" after its COVID-19 spike, Full Frontal chimes in.

The CNN reporter — and internet-famous fact-checker — offers a succinct summary.

Patinkin uploads a gem of a video.

The grown-ish star responds to Trump's claim that he was the "least racist person in the room."