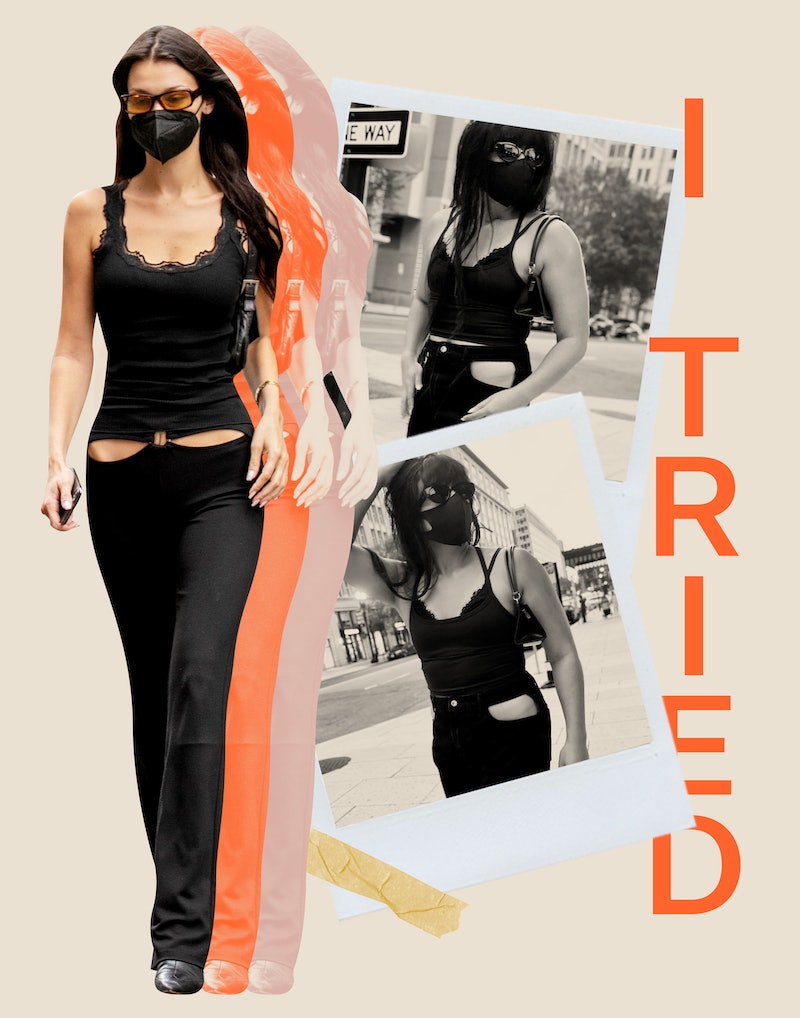 Earlier this summer, when Bella Hadid was spotted in Paris wearing black pants with pelvic cutouts, my immediate reaction was one of profound puzzlement. “Is this what the girls are wearing today?” I thought to myself, suddenly a little too aware of my age.

I had so many questions. Number 1: Why? Number 2: Which designer at I.Am.Gia — the Australian brand that makes the pants in question — decided that out of all the places to put cutouts, your pelvic region makes the most sense?

As with most styles that seem inaccessible for anyone who is, you know, not a supermodel, I decided this would be a trend I observed from a distance. Actually participating in this exposed hip bone experiment was not going to be in the cards for me.

But then, as so often happens in a fashion writer’s life, you are tasked with trying something you would never do under any other circumstances. Yes, in the name of Good Journalism, I grabbed a pair of pelvic cutout jeans from Nasty Gal and ventured outside my house to test them IRL. So, my friends, here’s what it was like pretending to be a Hadid sister for a day, pelvic cutouts and all.

It should go without saying that denim sizing is notoriously difficult. Now, factor in two giant holes right along your hips and stomach and, well, things get weird. I sized up, as I usually do in denim. But in retrospect, I could’ve probably stuck to my usual size for the most optimal fit.

The jeans felt a bit baggier than I would’ve liked, and there were sometimes awkward gaps around the cutouts depending on my posture. A tighter fit might be more desirable for this particular style.

Overall, though, they were surprisingly comfortable. I like the straight-leg silhouette, which manages to feel both timeless and right on trend. It was kind of strange reaching for front pockets and realizing that no pockets are there — just two big, gaping holes. But these do have two back pockets, so it’s not a completely impractical design.

The first place I ventured to while wearing the jeans was Sephora in downtown Washington, D.C., to pick up sunscreen. As I crossed the street from my car to the store, I could see that people’s eyes were immediately drawn to the cutouts, which was a little jarring.

But I don’t blame them — it’s kind of hard to not look when your hips are peeking out from your pants. Admittedly, at first I felt more odd than sexy. Eventually, I got over the fact that people were looking and just kept telling myself to channel my inner Hadid.

After running a couple other errands, I was off to dinner at a Peruvian Japanese eatery a few blocks away from the National Archives. It was cloudy, gray, and drizzling rain — not exactly my idea of a fun night out. But in the spirit of Doing Things, I stuck with my original plan. And I must say, the all-black look felt very fitting for that particular moody evening.

Again, the stares continued, but I felt more self-assured at a trendy restaurant than I did earlier in the day. I quickly discovered that sitting in these pants can be tricky since the waistline sometimes shifts around because of the cutouts. My best advice? Be sure to straighten the pants out before you sit down to avoid any awkward and uncomfortable spillage.

I’m surprised to say I actually would wear these again. Next time, I’d go for more texture and get playful with accessories. For fall, for example, python-print boots and a cropped cardigan would work really well with these jeans.

This silhouette is definitely best suited for fitted basics that hug the body and let the cutouts shine and take center stage. Tucking in shirts just felt kind of weird; part of the shirt is sticking out of the cutout, so fabric is hanging every which way. But depending on the length of your top, untucking might not be right either, because then you just hide the actual cutouts. And what’s the point of that?

A crop top or fitted tee is going to be your best option. Accessory wise, don’t take yourself too seriously. You can channel Y2K fashion with Matrix-inspired sunglasses and baguette bags.

So, size down, straighten up before you sit, and lean into 2000s outfit styling and you, too, can dress like a Hadid for a day and live to talk about it.