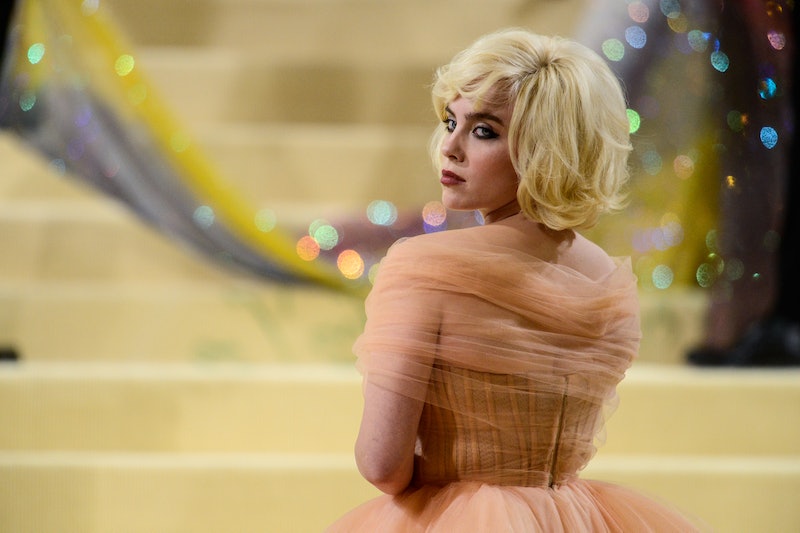 On Monday evening, Billie Eilish, co-host of the annual Met Gala, ascended the stairs of the Metropolitan Museum in New York City wearing a look that was unlike any other we’ve seen her wear in the past. Instead of sporty outerwear, she donned a neutral-colored tulle ballgown that channeled Marilyn Monroe. And Eilish slipped into a second dress for the evening that kept the glamorous vibes going.

Inside the museum, Eilish slipped out of her tulle confection and into a more sultry, deep red look. It featured a bustier top, a sheer draped cape, and a cascading silk bottom that featured an up-to-there slit on her right side. It was also designed by Oscar de la Renta, as her first look was.

As it turns out, British Vogue’s style director Dena Giannini and Eilish helped design the Met Gala looks together. Giannini shared that the first look was a nod to “the Charles LeMaire gown Marilyn Monroe borrowed from the 20th Century Fox wardrobe department for the 1951 Oscars,” and Eilish’s second, a “slinky red gown honored the legendary Edith Head, who masterminded the unforgettable wasp-waisted white dress worn by the future Princess Grace in the Hitchcock film.”

In that way, Billie Eilish really leaned into the theme — taking Americana to mean Old Hollywood glamour — and proved her salt as co-host for the event.

More like this
Camila Cabello Wore A Pearl Bra On The 2023 Grammys Red Carpet
By Alyssa Lapid
Lizzo Wore A Spicy Bustier Gown On The 2023 Grammys Red Carpet
By Alyssa Lapid
All Of Doja Cat’s Wildest Paris Couture Week Looks
By Dominique Norman
Beyoncé Wore A Golden Sheer Gown At Her VIP Dubai Concert
By Sam Ramsden
Get Even More From Bustle — Sign Up For The Newsletter
From hair trends to relationship advice, our daily newsletter has everything you need to sound like a person who’s on TikTok, even if you aren’t.