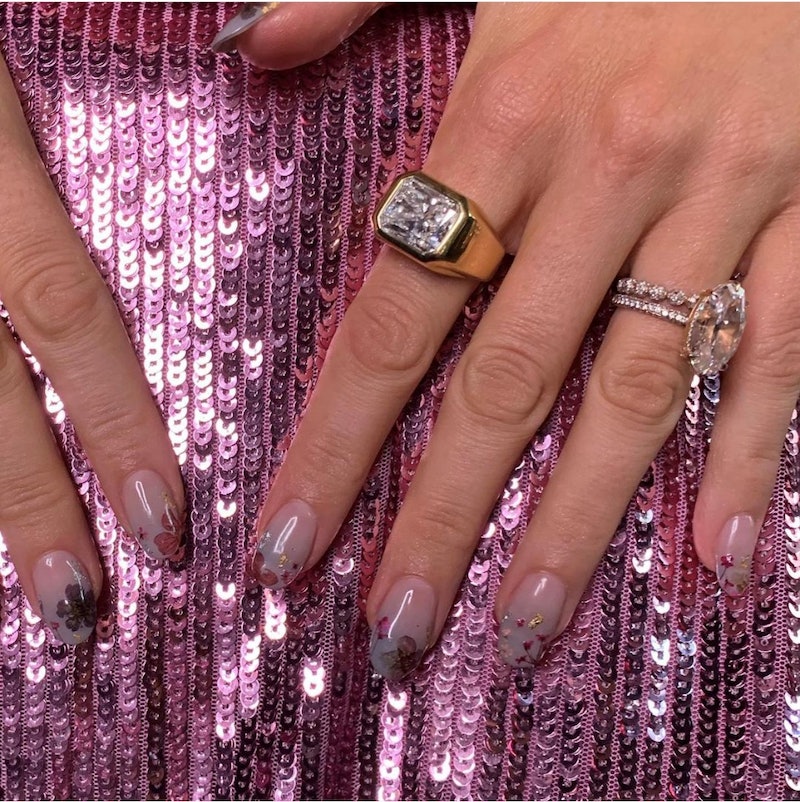 Just when you think today’s nail art couldn’t possibly get any cooler, Blake Lively’s flower nails have emerged as one of the best 3D manicures of the year — or maybe ever. The actor and mom of three attended the premiere of Free Guy in New York City earlier this week in support of her husband-slash-troll partner Ryan Reynolds, who stars in the new sci-fi action-comedy. While Lively certainly sparkled in her pink sequined Prabal Gurung gown and diamond chain ponytail (obsessed), it was her blink-and-you’ll-miss-it manicure that really stole the show — er, red carpet.

Lively commissioned celebrity nail artist (and Gigi Hadid fave) Elle for the look, which appeared to be a super romantic take on the buzzy French manicure. In a press statement, Elle notes that the duo usually draw inspiration from the movies’ promos, but opted to play off of her dress time time. “I love that it was innocent with a wild edge, breaking away from what she usually does,” she says.

And yes, in case you were wondering — she used actual pressed flowers. If you’re feeling crafty and want to try out the look for yourself, you’re in luck, as Elle also revealed the exact, step-by-step deets on how she achieved Lively’s amazing manicure.

First, she applied a full set of gel nail tips and used LeChat Liquid Gel Builder in Clear before filing and shaping Lively’s nails into an oval shape. Next, she painted the tips with LeChat Perfect Match Smoke Show, a slate gray. To get the ombre effect, Elle says she repainted the nails with Smoke Show, starting from the middle and working up toward the tips. Afterward, she applied one sheer coat of a light pink. Next, she soaked tiny pressed flowers — you can find these at your local craft store or on Etsy — in alcohol to soften them before placing them on the tips of the nails. (Elle notes that this was a delicate and timely process because it required embedding the flowers into the gel.) Finally, she added little bits of gold and silver foil throughout for a shiny effect. To finish everything off, she added a top coat and LeChat CBD Cuticle Oil.

Considering Lively wanted something “sweet, but edgy,” it’s safe to say she nailed it.