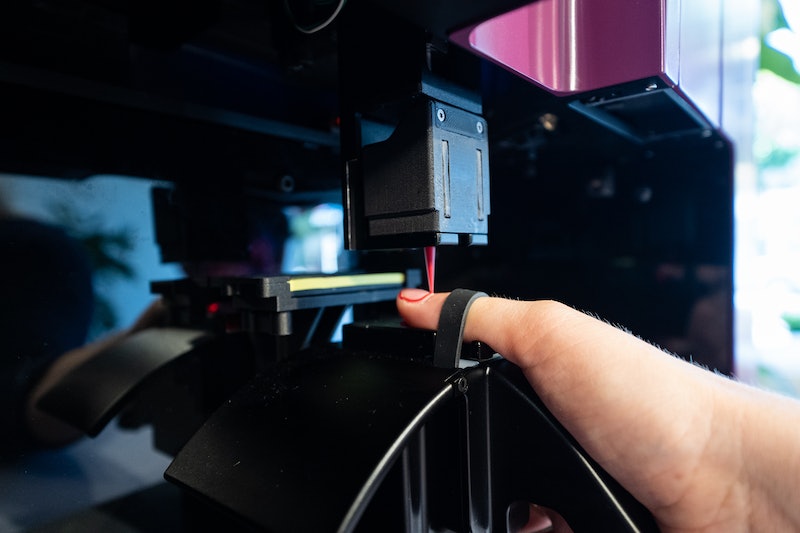 Are you too pressed for time to indulge in a full-service manicure at a salon? Do you just want a mani that is simple and no-frills but isn’t done at home? Would you trust a robot to solve this problem for you and paint your nails? If you answered yes to all of those questions, this is the machine for you. Say hello to Clockwork: the world’s first robot manicure.

Clockwork, a San Francisco-based nail tech startup, aims to provide simple nail services for those on the go. “Being able to give people the time to do what they love instead of what they have to is exactly what we set out to achieve,” Renuka Apte, co-founder of Clockwork tells Bustle. “We started with beauty services because it was my own pain point. We want to give people a reliable, express option when it comes to looking and feeling the way they want to.”

Named after the inner workings of a clock, Apte says that Clockwork is a nod to the engineering precision needed to achieve a great coat of polish. The machine works with 16 colors as of right now, with her saying that they will soon be adding more shades on a regular basis. Once you pick one of the available colors, you place a cartridge that contains about 1mL of your chosen nail polish shade into the machine. Then you insert a finger into a retractable band and rest your arm on the hand rest. Once you’ve secured your finger in place, you say ready and the machine will take 3D pictures of your nail to understand its shape and start to paint it in a clockwise motion until the entire nail is covered in polish.

I left Clockwork impressed. My nails were fully coated with great precision in a short amount of time (there’s no base coat needed). The entire process took less than 10 minutes, though you will need extra time for the manicure to fully dry. However, the machine is pretty sensitive to any movement once it starts to paint. Any errors that did occur were all due to my unsteadiness that caused the machine to miss a corner. Luckily, it was an easy fix. A technician overseeing my appointment was readily equipped with nail polish remover so that I could re-do the process for that specific nail. At the end, the nail tech gave each digit a top coat. One week later, and my manicure is still holding up.

The robots are also designed with user safety being a top priority. Shaped like a giant coffee machine, it’s pretty transparent so the customer to see exactly what goes on during a manicure. “We felt like a person will feel a lot safer when they can watch their nails being painted instead of their hand disappearing into a box, where you have no control over what might happen inside,” Apte says.

She further explains that the software works with multiple sensors to perform multiple checks before and during the manicure. There are also instructions for the robot to stop if it doesn’t feel one hundred percent confident to continue painting.

The cartridge that dispenses the nail polish has a soft plastic tip and different parts of the machine can disengage when pushed with force. You can also pull out your hand at any time without any resistance; the hand rest is not automated and the band that holds your finger steady can easily retract.

Currently, there are two robots located in San Francisco at their own pop-up storefront and one in New York City, at the Rockefeller Center’s ZO. lounge for its members. Each manicure costs $10. Future plans include opening it up more to the public with a number of partnerships (she hints at being able to get your nails done while shopping at a well-known and loved retailer early next year) and an addition of new features.

But robots in general always raise the question of whether certain jobs can be easily replaced by these new mechanics. The nail industry, in particular, relies heavily on the human interaction between consumers and manicurists. According to the Bureau of Labor Statistics, there were just a little more than 120,000 nail jobs reported in 2020. Assuming there are no major disruptions, there is an expected job growth rate of 33 percent between 2020 and 2030.

Comparing it to how fast-food chains using automation hasn’t prevented the restaurant industry from growing, Apte says this new innovation shouldn’t cause any worry of job loss in an industry that relies heavily on artists. Because the machine doesn’t clean, buff, shape, or file nails and doesn’t do any nail art, she doesn’t predict that it will completely replace a traditional visit to your favorite nail salon.

“We simply want to give people another option [because] for too long beauty has been limited to people who can afford it and who have the time to spend; we need another alternative for the many, many people who are juggling jobs with caring for families with keeping themselves fit and so much more,” she says. “When we want luxury, pampering, intricate artistry, we will have traditional salons, and when we're looking for the end result without wanting to spend the time or money, we will use robots.”

More like this
The Best Press-On Nails For Valentine's Day 2023
By Audrey Noble
All Of 2023's Biggest Nail Art Trends, According To Top Manicurists
By Jordan Murray
12 Cute Pink & Red Nail Art Ideas For Valentine's Day
By Olivia Rose Rushing
The 19 Best OPI Nail Polish Colors, According To Manicurists
By Audrey Noble
Get Even More From Bustle — Sign Up For The Newsletter
From hair trends to relationship advice, our daily newsletter has everything you need to sound like a person who’s on TikTok, even if you aren’t.