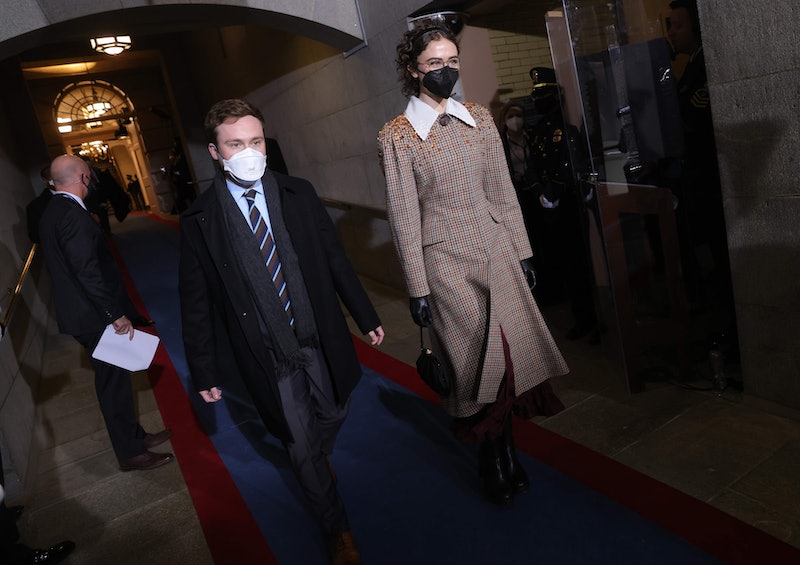 There’s a new Second Family in town, and one of its members has stolen the style spotlight: Kamala Harris' stepdaughter Ella Emhoff. At the inauguration, the 21-year-old secured her place among the most fashionable of political offspring when she stepped out in a plaid houndstooth jacket with a cinched waist, classic white collar, and dazzling embellishments expertly placed along the shoulders and chest.

Without a doubt, it was among the most artsy looks ever donned on the steps of the U.S. Capitol, where black and navy skirt suits tend to reign supreme. The quirky ensemble, designed by Miu Miu, was topped off with equally chic black accessories including leather gloves, purse, boots, and a face mask. Underneath her striking outerwear, she opted for a prairie-inspired burgundy frock by Batsheva.

“My mood board was very ‘little girl’ in a sense, a lot of scalloped collars and big silhouette shoulders and small buttons,” Emhoff told Vogue. “I was going for something girlier, to embrace my feminine side — especially after that suit that I felt so great in — because, like, how many times do you prepare yourself to attend an inauguration? This momentous of an event deserves a momentous outfit.”

Who knew the Second Daughter was so fashion-minded?

As it turns out, her penchant for all things fashion is quite fitting when you learn more about her background and interests. Ahead, check out everything you need to know about the newest style star of the Biden-Harris administration. If inauguration is any indication, future Emhoff sightings will be marked by a flair for the unexpected.

She’s in fashion school at Parsons.

Ah, so it all makes sense. Emhoff isn’t just a fashion enthusiast, she’s also a designer in the making. She’s currently a senior at the prestigious Parsons School of Design in New York City, an institution that has given the world the likes of Marc Jacobs, Donna Karan, Anna Sui, Derek Lam, and countless other talents. Perhaps she’ll be showing at New York Fashion Week in a few seasons? Fashionistas everywhere can only hope.

She just nabbed a modeling contract.

Emhoff is now the freshest face at IMG Models, a prestigious modeling agency that represents Karlie Kloss, Alek Wek, Ashley Graham, and many others.

“I was pretty surprised when everything with IMG was happening because when I was younger, I never saw that as being part of my timeline,” she told The New York Times. “As someone who, like a lot of young girls out there, had self-confidence issues, it is intimidating and scary to go into this world that is hyper-focused on you and the body.”

From Tweety bags to striped maxi dresses to color-coordinated bikini tops and bucket hats, Emhoff is a master knitter according to her uber vibrant Instagram. In her latest post from January 15, she revealed the aforementioned Tweety bag and striped dress, teasing that they would be “available soon [at] a mall near you.” Is that a promise, Ella?!

She experiments with other artistic mediums.

Like a true art student, she dabbles in other artistic endeavors, including painting and beadwork. A quick scroll through her IG reveals that she likes to display her paintings alongside matching boxes of cereal at her local grocery store (as one does) and that she loves a good beaded handbag. She’s also painted an entire mural on a massive rock, in case you were doubting her ability to scale her creativity.

As if her cool factor needed to be upped a notch, Emhoff is also an aspiring tattoo artist. She told Garage that one of her quarantine hobbies has been tattooing herself. “I did the classic: I did my dog’s name, and I did a little flower,” she said. “[Then] I recently did my first big boy: [a] salmon fish with a flower hanging out of its mouth. It’s super fun. I don’t think it’s something I would ever want to pursue [professionally], but it’s fun to just do it to yourself or do it to a friend.”

She’s part of a modern family.

Sure, the entire world knows Kamala Harris as the first Black and Indian female vice president of the United States, but to Emhoff, she’s simply “Momala.” She told The New York Times that having three parents as an adult can be, well, a lot. But she takes it all in stride.

“The level of parenting between the three of them is very different now that we’re both [Ella and her brother Cole] in our 20s and are kind of able to make decisions,” Emhoff said. “So with hair and tattoos and things like that, I think they’re all in the realm of like, ‘I don’t understand it, but I want you to be who you want to be.’ They have good communication between the three of them. They are really a unit, like a three-person parenting squad. It’s really cool.”