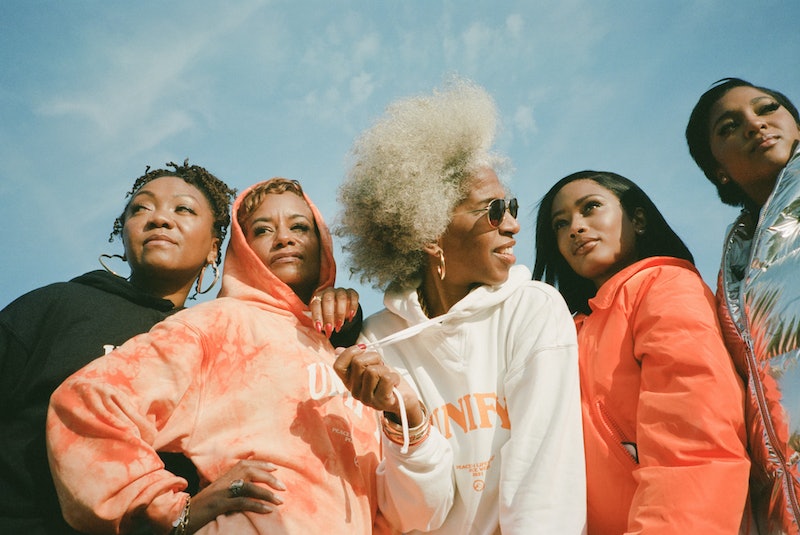 The Queens-based activist — who’s worked alongside Tupac Shakur, Ja Rule, and DMX — has been focused on decreasing crime and keeping young people out of jail for more than three decades.

“DMX was the first mainstream artist to support my work,” Ford tells Bustle. “He was always interconnected with the young people. Anytime I brought a different group of kids to see DMX — he would give us tickets to shows — he would take time to come and talk to the kids.”

Since the ’80s, Ford has been implementing programs on the ground in Jamaica, Queens, that embody her mantra: “Peace is a lifestyle.” Today, she is co-founder and CEO of LIFE Camp, a violence intervention and prevention organization.

Inspired by her message of peace, Ford partnered with activewear brand Bandier on a capsule collection. As part of the collaboration, 100% of proceeds go to LIFE Camp and fund the organization’s work on the ground.

“The inspiration behind the collection was the desire for peace,” Ford says. “We launched the collection [during] the height of the pandemic as a way to speak to the current state of affairs and spread the message of unity against gun violence and police brutality.”

Six items round out the collection, which features vibrant designs that are throwback homages to post-civil rights era poster art, 1960s summer of love merchandise, and early ’90s concert merch.

“Some transformative shows for me in the ’90s took place in Roy Wilkins Park in Queens,” Ford says. “Tupac, Salt-N-Pepa, and Hot 97’s Summer Jam. I remember a lot of tie-dye from those times and was inspired to incorporate it into the collection. It reminded me of hip hopping down the block on the way to the park jams.”

That energy was also incorporated in the photo shoot, Ford says. “We were doing handstands,” she says. “Rachel Noerdlinger, one of the ladies, did half the shoot on her hands, and it was just a great time.”

In 2020, many industries, including fashion, were getting behind Black-owned businesses in the midst of the protests for racial justice. Ford believes the support has lasted.

“This movement has kickstarted a domino effect and given many businesses and individuals great exposure, allowing them to grow and mentor others as a result,” she says, citing the collection with Bandier — and the enthusiasm of the brand’s founder, Jennifer Bandier — as an example. “I want to see more brands that have infrastructure and resources partner with nonprofits such as ours,” she adds.

As a Black woman, Ford has overcome unique roadblocks to ensure that her voice and perspective are heard.

“I’m constantly being stereotyped, and decisions are made about me based on the fact that I’m a Black woman,” she says. “There’s no getting around that challenge because it is who I am. My passion is often misunderstood as anger and my commitment as control.”

She references a Malcom X quote — “The most disrespected and unprotected woman in America is the Black woman” — to underscore her point.

“[Malcom X] said that to highlight the negative ways in which Black women are treated and the harmful internalization of society’s loathing of who we are,” she says. “Up until perhaps recently, the institutionalization of systemic racism against Black women has caused us to be heard through a filter of being ‘angry,’ or not worthy of regard, which causes our critical voices to be dismissed versus regarded, despite the fact that we have nourished, birthed, and contributed to the cultivation of this nation.”