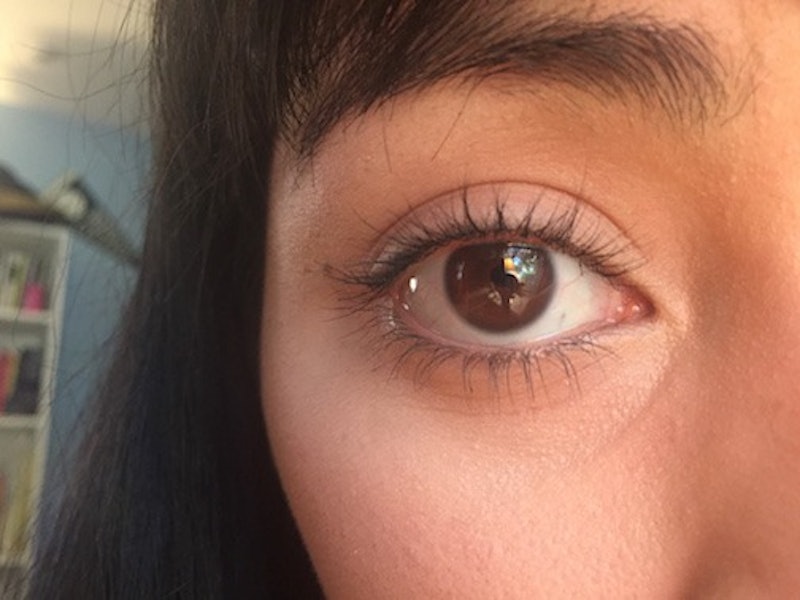 I’ve been blessed with very long lashes. Unfortunately, they also refuse to hold a curl for longer than 30 seconds. Mere minutes after I’ve finalized my look, my lashes begin to droop. Simply using a curler has had no lasting effect, so I decided to try out popular eyelash curling hacks and tricks to see if they would help me lengthen my lashes.

Here's the thing about my eyelashes: In their natural state, they are long and almost straight down over my eyes. They are fairly thin and look a tad sparse without any mascara, both curled and uncurled. I wear glasses (when I remember), so I don’t usually do much more than curl them as a part of my everyday makeup routine since I know they’ll be hidden behind my frames, but when I decide to go with them, I'll pick up any random mascara I have in my makeup table.

Thankfully, despite all my lash woes, the internet has no shortage of beauty hacks. From viral TikTok videos to influencer recommendations, if you need to find something, it's likely already out there. Of course, beauty hacks can be hit or miss, but putting them to the test can tell if there really is a way to make your lashes hold a curl for longer than 20 minutes. I found popular tips for curling your eyelashes and tried them out, so you don’t have to.

From heat the curler to the wiggle method of mascara application, here are the six eyelash curling tricks I tried out and what worked to really keep my eyelashes curled.

Hack #1: Heating Up My Eyelash Curler

I’ve heard this trick a dozen times, from makeup gurus to Pinterest. The idea is that heating your eyelash curler helps lashes stay curled longer. The concept makes sense, since heat helps hair curl or straighten the hair on your head, and eyelashes are also hair, right? The process is simple and only requires an eyelash curler and a heat source, followed by the usual curling technique you use. For this hack, I used my trusty Shu Uemura curler and a hair dryer to warm it up before curling each eye.

I only warmed it up a little because the skin around your eye is very sensitive and I did not want to burn my lashes or eyelids, obviously. Even though normal curlers/straighteners for hair get extremely hot, eyelashes don’t need intense heat and you could actually hurt yourself if you placed something very hot in that area. I heated mine up for a few seconds with the blow-dryer and tested it out on my hand until I felt it was OK to put near my eye.

Directly after curling my lashes, they looked amazing! I wanted to see how this held up alone, so I didn’t use any mascara after the heating technique. But, I checked them a little while after (knowing that they are usually already droopy) and they still were very much curled and beautiful. However, by the end of the day, I saw that they were again flat, as if I hadn’t done much to them. I didn’t touch my eye during the day or recurl them in any way. I also did not wear my glasses.

I am fairly lazy with my everyday makeup routine, especially when it comes to mascara. My hands are just not steady enough to apply it without poking myself in the eye or getting marks all over my eyelids. But this hack seemed to play to that strength for once, calling for wiggling your mascara wand for better eyelash lift. I had heard of this method as the “right way” to apply mascara, since it will also make sure your lashes stay de-clumped and look fuller, but I had never actually tested it out. All you have to do is wiggle the applicator at the roots of your lashes and quickly pull up. This allows for most of the product to be at the bottom of your lashes, instead of the top, making sure your lashes aren’t weighed down with product. It made sense, so I decided to give it a go.

I used W3LL PEOPLE Expressionist Mascara and paired the hack with warming up my curler, as I didn’t think it would hurt the results. I curled my lashes first, and then quickly applied the mascara from the roots to tips once. After seeing the results, I did it once more. I don’t really use much product on my eyelashes, so going over them twice was a lot for me. They looked wonderful directly after I did the steps, but looked just as flat at the end of the day as the first hack.

This trick was a new one, and I didn’t really understand how it was supposed to help the lashes stayed curled, but I gave it a go anyway. The steps seemed simple enough that all you had to do was curl your lashes and apply your mascara at the same time. However, I am not ambidextrous in the slightest, so after attempting to hold the curler with my left hand and grab the mascara applicator in the other, I ended up with mascara all over my eyes, curler, and fingers. It actually took me multiple attempts to even get myself to apply the mascara, as I kept dropping things and felt like I might accidentally rip my lashes out while I shifted around trying to keep everything in control. It was not easy to do at all, and the end results looked as if I didn’t apply any mascara to my lashes.

Maybe my lack of finesse with doing this hack correctly affected the results, but even before the end of the day, I already knew they wouldn’t be curled beautiful. By the time I got home to take photos, they were pretty flat. This hack was just not worth the trouble, in my opinion.

For some reason, I’m not a fan of waterproof anything. Maybe its the chemicals or hydrophobic stuff in the product that scares me, especially because it’s going to be close to my eyes, but I have avoided waterproof makeup for years. However, so many of the suggestions for keeping eyelashes curled longer is to apply waterproof mascara before regular mascara. According to the gurus, makeup sites, and even the professionals, this is the right way to keep your lashes looking fabulous all day.

I then went ahead and applied the waterproof mascara, using the wiggling method, followed by a coat of Benefit’s Roller Lash.

At the end of the day, I was impressed by how the curl had held throughout my normal activities. Even though I'd been hesitant to use waterproof before, I may have converted after seeing the results of how it kept my long lashes from drooping over my eyes. It could have also helped that both my mascaras keep my lashes curled, but I'm going to go with the waterproof as the actual reason this hack totally rocked.

Based on my fail at applying mascara with a curler, I was very nervous about trying this technique. How could I curl lashes in sections to get a better curl if I could barely curl them one way? I tend to be heavy-handed, so I knew I was going to have to be extra careful doing this in order to not rip out my lashes. I started by curling them how I usually would then moved the curler over a different section of hair until I was near the tips. I did this process twice to make sure I curled them well, but I was gentle when squeezing the curler just in case.

After doing this, I wanted to make sure the curl lasted longer, so I applied only one coat of Benefit's Roller Lash. By the end of the day, they were still pretty curled, though not as good as the waterproof technique. I did like the results of this hack, but having to carefully curl my lashes in sections made me nervous that I would accidentally crimp instead of curl.

Hack #6: Getting Them Done Professionally

I am, by no means, a professional makeup artist. So, I wanted to see if their magical techniques would make a difference in keeping my lashes curled better than all the hacks I tried myself. The day before Halloween, I was invited to get my makeup done at MAC, so I took the opportunity and spoke with a few MUAs there on their ideas for how to keep your eyelashes curled.

All of them reminded me that, like any kind of hair, a curl can fall out over time. Regardless of how well you style them, eventually, the curl will not be as nice as it was when first styling. Of course, for hairstyling, we have the luxury of hairspray, but applying that to your lashes does not seem like a good idea. However, they reiterated that using waterproof mascara helps keep curls longer, especially using it alongside a curler. My MUA did not use a curler.

At the end of the day, I was still impressed with how the lashes looked. I wasn't able to take a video before my phone died, but managed to snap a few pictures. My lashes still had length, thickness, and a curl better than when I did not use waterproof mascara.

After trying all the hacks, it's clear that waterproof mascara is definitely a must for those looking to hold their curls longer. I mixed and matched most of these hacks (except for the third) and found that using waterproof mascara always outdid any other attempt when I didn't use it. It is like the hairspray for eyelashes!

Regardless of how you curl your lashes — in parts or with a warm curler — finalizing your look with some waterproof mascara will definitely keep your lashes looking stellar longer. Oh, and it doesn't hurt if the mascara is also good for curling.

This article was originally published on November 3, 2015