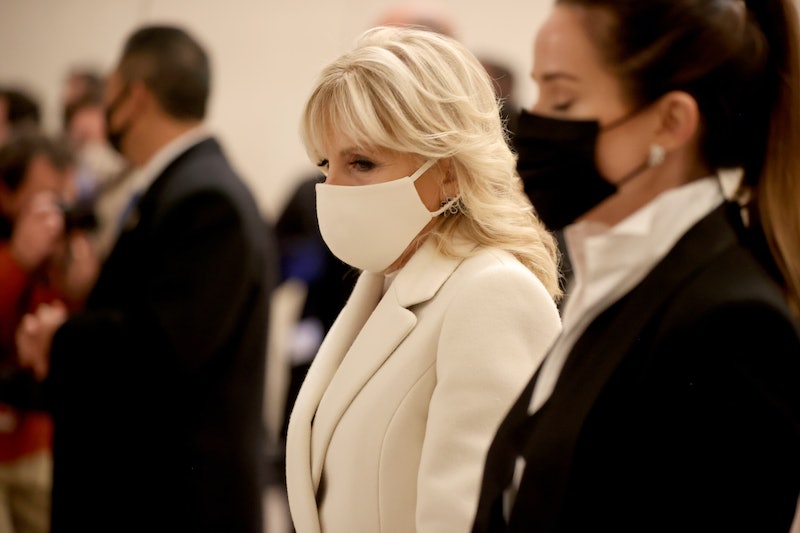 Inauguration Day marks the transition of power from one administration to the next, but it also presents ample opportunities for some major fashion moments. That was certainly the case on Wednesday, which delivered former First Lady Michelle Obama in an internet-breaking plum palazzo pant suit by Sergio Hudson, the inaugural poet Amanda Gorman in a sunny yellow coat by Prada, and so many other instantly iconic looks. One such outfit? First Lady Jill Biden's second inauguration look by Gabriela Hearst.

Yes, Dr. Biden began the day in an ocean blue ensemble by Markarian, an NYC-based womenswear label by newcomer designer Alexandra O’Neill. For the evening festivities, she switched to a white dress by Gabriela Hearst, another American designer. Ornate floral embroidery covered the sheer top half of the dress, a nod to “all of the state flowers of the United States and territories and the District of Columbia,” according to The New York Times fashion director Vanessa Friedman.

Vice President Kamala Harris had an equally fashionable Inauguration Day. In the morning, she wore a vibrant violet ensemble by Christopher John Rogers, which she topped off with her go-to pearls, including earrings and a necklace.

She then transitioned to a sleek all-black look by Sergio Hudson, who was also responsible for Michelle Obama’s monochrome moment earlier in the day. According to Harper’s Bazaar, Harris’s nighttime ensemble included a sequin cocktail dress, a floor-sweeping silk tuxedo overcoat, and earrings by Irene Neuwirth.

More like this
Zendaya’s Sheer Valentino Look Won Paris Fashion Week
By Dominique Norman
Florence Pugh Wore A Sparkly Sheer Top at PFW & I’m Not Over It
By Allie Fasanella
Bella Hadid's Flare Jeans Under A Dress Outfit Is So Nostalgic
By Allie Fasanella
These Are Kylie Jenner's Best Paris Fashion Week Looks... So Far
By Dominique Norman
Get Even More From Bustle — Sign Up For The Newsletter