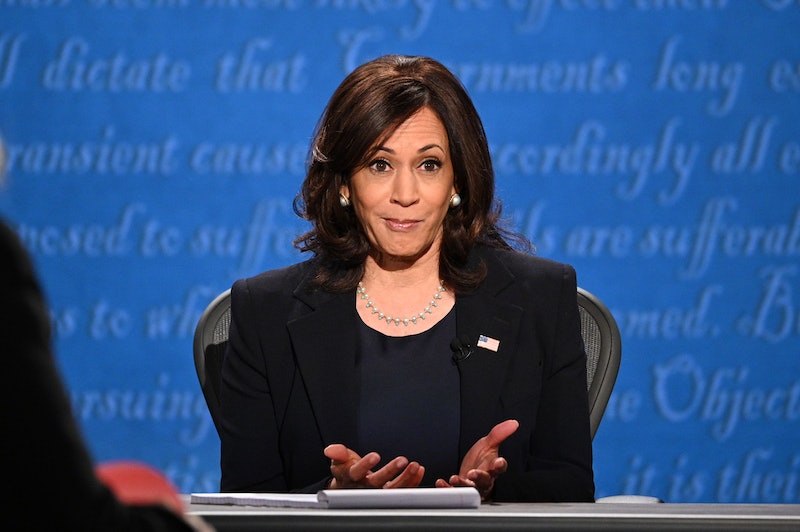 Senator Kamala Harris and Mike Pence had their first and only vice presidential debate Wednesday night. For nearly a week, the event was up in the air after Donald Trump — and many of those in his inner circle — tested positive for COVID-19. But thanks to some expertly placed plexiglass, the show did go on after all. The VP candidate's debate delivery and facial expressions got social media buzzing, as did her choice in jewelry. In fact, Kamala Harris' pearl necklace was quite the topic of discussion on Twitter.

The California senator stepped onto the debate stage in Salt Lake City wearing a classic black suit and a matching blouse. Accessory-wise, she opted for two statement pearl pieces: gold-trimmed earrings and a double-strand necklace with both blue and white pearls.

Kamala Harris' fondness for pearls isn't new. According to Vanity Fair, when she graduated from Howard University in 1986, she sported a single-strand pearl necklace and drop earrings in her graduation picture. It was an intentional choice: At Howard, she was a member of the Black Greek-letter sorority Alpha Kappa Alpha, which uses pearls as one of its symbols.

“Pearls represent refinement and wisdom,” Glenda Glover, international president of Alpha Kappa Alpha and president of Tennessee State University, told Vanity Fair in August. “We train young ladies to be leaders and to make sure they have the wisdom to lead…and that goes hand in hand with the true meaning of what Alpha Kappa Alpha is all about.”

Harris previously has worn pearls at other high-profile events, including her first public appearance with Joe Biden over the summer. While she typically opts for timeless white pearls, she sometimes mixes it up with different hues, like she did for the VP debate.

In addition to the clear connection to her beloved sorority and Black sisterhood, some eagle-eyed observers pointed out that the necklace she wore Wednesday night bore striking similarities to Supreme Court Justice Ruth Bader Ginsburg's collars. Ginsburg passed away in September and since then, her collars have become something of a sartorial tribute embraced by her legions of fans. Given Harris’ prolific law career, it’s completely plausible that in addition to the AKA nod, she chose this particular necklace design as a heartwarming nod to the late icon.

Another possible hidden meaning behind the pearls? It could be an homage to her Indian heritage, with one Twitter user suggesting that the double-strand necklace has “a desi vibe to it.”

Either way, it was the perfect accessory to her sharp-shouldered suit, flawless hairstyle, and expert performance at the vice presidential debate.