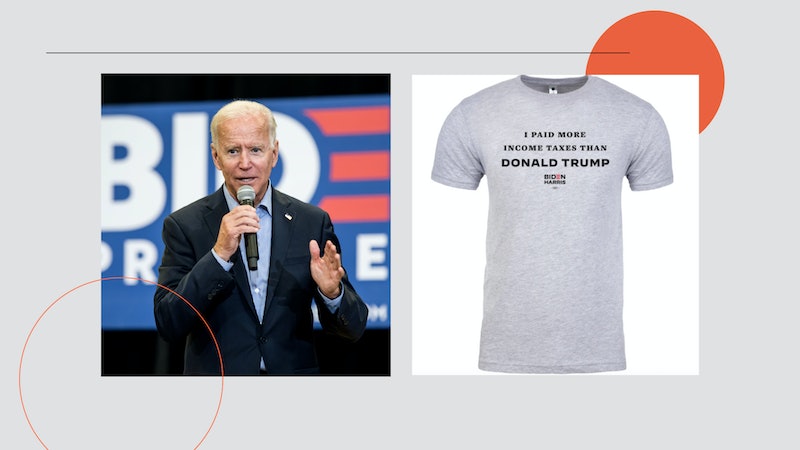 Well, that was quick. Just a day after The New York Times broke the news about Donald Trump's tax returns, the Joe Biden campaign dropped a piece of merchandise that’s sure to become a popular item among his supporters: Say hello to the “I Paid More In Taxes Than Donald Trump” T-shirt.

In case you haven’t been keeping up with the headlines, the newspaper revealed that Trump paid just $750 in federal income tax in 2016 and 2017, and paid no income taxes at all for 10 out of 15 years dating back to 2000. The information obtained by The Times spans more than two decades, and paints a pretty bleak picture of Trump’s financial situation: failing properties, audit battles with the IRS, and $421 million in debt that’s coming due any day now.

On social media, people were quick to fixate on the $750 figure, largely because no matter your profession or income bracket, you probably paid more federal taxes in a single year than Trump, who often brags about being a successful billionaire even though the reporting from The Times casts serious doubt over that claim.

With the first presidential debate scheduled for tonight, the Biden camp wasted no time diversifying their merch lineup with the tax-themed tee, which is currently available in heather gray and comes in sizes XS-3XL.

Some other notable pieces from the campaign include a T-shirt with aviator glasses — Biden’s go-to eyewear — printed across the front, Biden/Harris navy sweatpants (also available in slate gray), and a “We Make The Difference” brown crewneck sweatshirt designed by Aurora James for the campaign’s special “Believe In Better” collection.

More like this
13 Spring 2023 Fashion Trends That Feel So Fresh
By Allie Fasanella
25 Cute Ski Outfits That Look Hot & Keep Away The Cold
By Bella Gerard
Harry Styles Has Become An Accidental Vinted Model
By El Hunt
TikTok Is Raving About Primark’s Affordable North Face “Dupe"
By Sam Ramsden
Get Even More From Bustle — Sign Up For The Newsletter
From hair trends to relationship advice, our daily newsletter has everything you need to sound like a person who’s on TikTok, even if you aren’t.