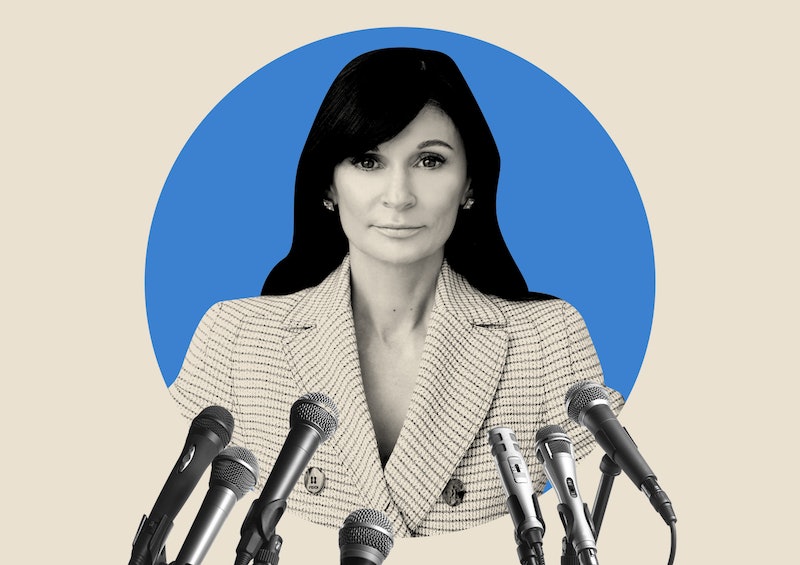 In Bustle’s Quick Question, we ask women leaders all about advice — from the best guidance they’ve ever gotten to what they’re still figuring out. Here, fashion mogul and Elite World Group CEO Julia Haart tells Bustle about starting over, starring in a reality TV show, and proving naysayers wrong.

Before she became CEO of talent media company Elite World, Julia Haart was largely cut off from modern society.

Raised in the Haredi community — a strict sect of Orthodox Judaism — north of New York City, she had to refrain from asserting authority, as well as adhere to modesty laws that require women to wear long skirts and high necklines.

“My life is split into two parts,” Haart, 50, tells Bustle. “The first 43 years of my existence are what I classify as what was done to me, because I wasn’t allowed to be myself. I didn’t want to become known for just what was done to me.”

Haart left the community in 2013. Now, eight years later, she’s starring in Netflix’s My Unorthodox Life, a reality TV show that centers around her life as a fashion executive and mother to four children.

“The goal is that people see this show and say, ‘Hey, if she can change her life at 43 knowing nothing about the outside world, [then] my difficulty or my thing that I’d like to change, maybe I can change that too.’”

Below, Haart opens up about her lifelong interest in fashion, the best business advice she’s ever received, and why she thinks execs should talk to themselves.

Take us back to your first job in the fashion industry, when you first decided to launch your namesake shoe brand. Where were you at at that point in your life, and why was that the right move at that time?

I didn’t really know much about right or wrong. I knew nothing about business. Fashion has always been my love — to me, it’s artistic self-expression. In my community, I’d hide fashion magazines in my sock drawers where I knew my father and my husband would not look. I taught myself how to sew when I was a teenager.

What excited you most about creating your own brand?

Go back to 2015 and 2016. If you said the word “comfort” in the fashion industry, that was a dirty word. I was literally told, “Julia, if you want people to carry your designs, don’t use the word ‘comfort.’” Fashion was being made for women by men who never had to wear the clothes they were forcing on us. Nowhere in fashion did you see that more clearly than in shoe brands. How many shoe brands were designed and owned by women? Men didn’t actually have to wear the torturous and painful shoes they created for us. I wanted to make fashion for women, not just for women to wear.

When you look back on your journey, what surprises you the most?

Oh, wow. I don’t think anyone’s asked me that question. What really surprises me is even my ex-husband has now left fundamentalist Judaism and is now a modern Orthodox Jew. He called me the other week and he’s like, “Julia, I want to thank you. My life is so much better.” It makes me feel so good because that means everyone in my family — some faster, some slower — but everyone in my family, through my transition, has managed to find a better place for themselves in this present world.

On the flip side, what’s the worst business advice you’ve ever received?

When someone told me, “Don’t worry, I’m the expert. I know better.” The minute someone tells you they’re an expert and they know better than you, run.

Have you had an experience where somebody said that to you?

Oh my goodness, all the time. All day long. When I created the first-ever stretch Leavers lace, which made thongs that didn’t sit in your — I’m not sure what the appropriate terminology is for a publication.

When I first proposed that, a guy actually patted me on the head — literally took his hand and patted me on the head, as if I was a 5-year-old. Many times people have told me, “It’s not done like this, Julia. Julia, the word ‘comfort’ isn’t used. Julia, people don’t dress this way.” I don’t care. If something isn’t right, you should stop worrying about it, and we should fix it.

What does an aspiring fashion executive need to know to be successful?

You have to have so much faith in yourself and literally, start talking to yourself. I know that sounds crazy. But when you wake up in the morning, talk to yourself in the mirror and give yourself encouragement, because it’s such a difficult journey. It’s so fraught with disaster, mistakes, and dishonest people. The only way you’re going to do it is if you don’t let anything stand in your way.

Don’t look to others for accolades or encouragement — you have to learn how to encourage yourself. You have to become so self-reliant that when the rest of the world is laughing at you, you stay strong.