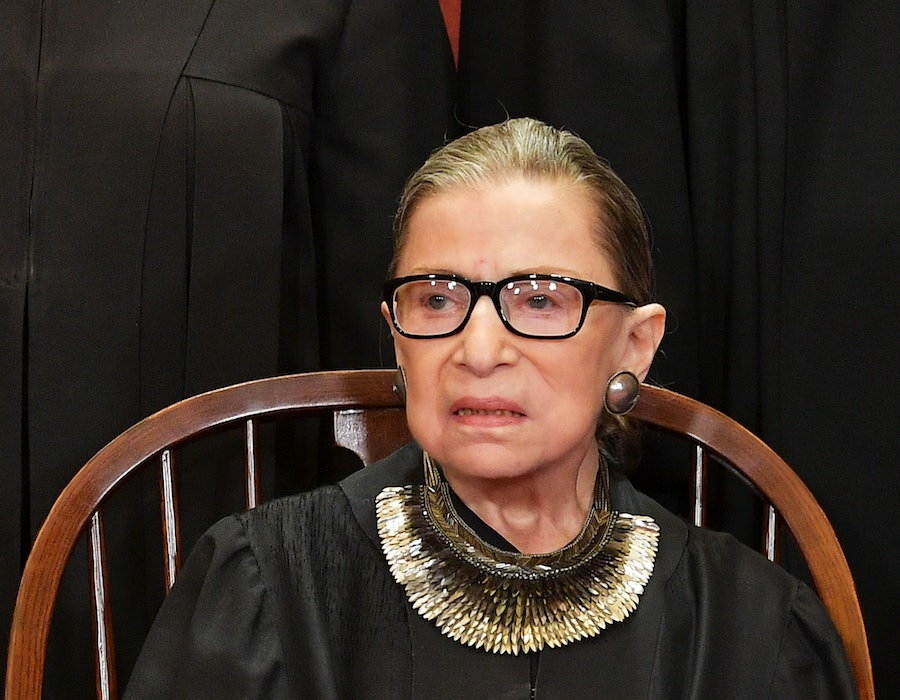 Supreme Court judicial robes don't leave a lot of room for accessorizing, but the most notorious SCOTUS justice never let that stop her from adding flair (and often political statements) to her ensembles. Although she rarely gave interviews, fans picked up notes over the years on what Ruth Bader Ginsburg's collars mean.

Widely recognized for her dissenting opinions as well as her collection of collars (also known as jabots), Ginsburg was a liberal social icon, appearing everywhere from children's "Superhero Day" costumes to Lego keychains on Etsy. Her famous "dissent" collar — worn for such occasions as her Hobby Lobby contraception case dissent — has even been made into necklaces and pins.

"The standard robe is made for a man because it has a place for the shirt to show, and the tie," RBG said in a 2009 interview with The Washington Post. "So Sandra Day O'Connor and I thought it would be appropriate if we included as part of our robe something typical of a woman.

"So I have many, many collars."

From her iconic bejeweled "dissent" jabot to more understated lace, RBG had a look for every court decision. More than simply accessories to a black robe, her collars became symbols of her unapologetic and strongly feminist ideals.

Justice Ruth Bader Ginsburg died on Sept.19 at the age of 87, but her style legacy lives on. Scroll down for her iconic collars and the meaning behind them.

Ginsburg's prolific collection of collars may have started as a way to unapologetically express her femininity and bold sense of style in a field dominated by men. But each one has since taken on a personality and political meaning of its own — and turned RBG into a feminist fashion icon in the process.

This article was originally published on June 5, 2018