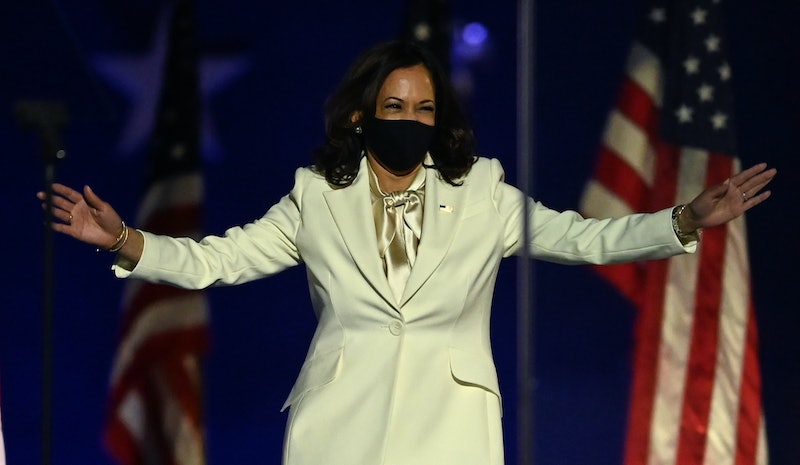 Kamala Harris made her first appearance as Vice President-elect on Saturday, Nov. 7, after various media outlets projected Joe Biden as the winner of the 2020 presidential election. To introduce him, she gave a rousing speech about the future of the nation, citing her history-making appointment as the first woman, first Black person, and first South Asian person to become Vice President. While her words had a powerful impact, Kamala Harris' white suit at her victory speech also held special significance.

For her first speech after the election, Harris chose a Carolina Herrera white suit and satin pussybow blouse, styled with Manolo Blahnik nude pointy toe pumps. White is widely considered a symbol of the suffragette movement of the early 20th century, when activist organizations fought for women to have the right to vote. This year marks the 100th anniversary of that movement.

Like Harris, women lawmakers wore white at the 2019 State of the Union address to acknowledge the suffragettes and to silently protest the Trump administration's policies. Hillary Clinton wore a white pantsuit several times during her historic presidential run, so much so that the look became a symbol of modern feminism.

Harris' pussybow blouse could have an underlying meaning as well. It's a staple in her professional wardrobe, as she wore the same style at Amy Coney Barrett's hearing. At the time, some saw the blouse as a dig at Donald Trump since Melania wore a similar top after Trump's Access Hollywood tapes were leaked. In the audio, the beleaguered President appeared to boast about sexual assault. “I don’t even wait," he is heard saying. "And when you’re a star, they let you do it. You can do anything. ... Grab ‘em by the p*ssy. You can do anything.” Since then, the blouse style has become a symbol of women's solidarity in the face of sexual assault around the world.

It will be interesting to follow Harris' style statements over the course of the next 4 years. To be sure, she'll continue to take a thoughtful approach to dressing, sending powerful yet subtle messages through her clothing for many public appearances to come.

More like this
Kate Middleton Wore The Ultimate '90s Power Suit
By Sam Ramsden
'Emily In Paris' Lucien Laviscount & Lucas Bravo Owned Paris Fashion Week
By El Hunt
Beyoncé Wore A Golden Sheer Gown At Her VIP Dubai Concert
By Sam Ramsden
Every Single Thing In Maya Jama’s 'Love Island' Wardrobe
By Darshita Goyal
Get Even More From Bustle — Sign Up For The Newsletter
From hair trends to relationship advice, our daily newsletter has everything you need to sound like a person who’s on TikTok, even if you aren’t.