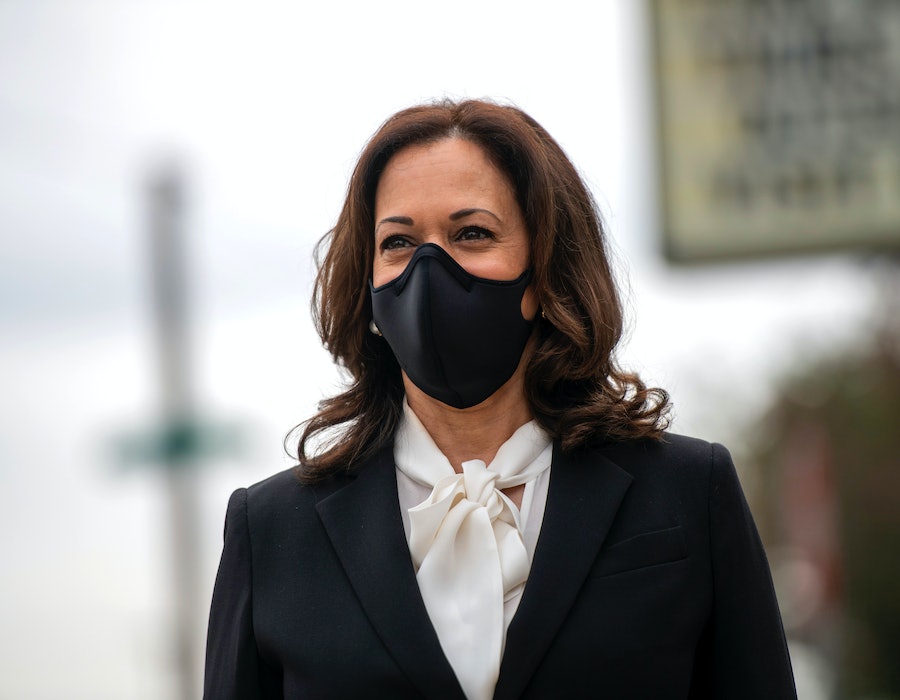 She wore a gray blazer layered over the chic blouse, her shoulder-length caramel locks coiffed just so. There were no visible accessories, save for a copy of the children’s book, I Dissent: Ruth Bader Ginsburg Makes Her Mark by Debbie Levy, in plain sight over her left shoulder.

Both the pussy bow blouse and the expertly placed book can be interpreted as expert trolls on the part of the junior senator from California, who’s also the Democratic vice presidential candidate — the first Black and South Asian woman to ever be a VP pick for a major party ticket.

First, the pussy bow style of neckwear has been a longtime favorite for many female politicians, likely because it strikes the ideal balance between conservative and feminine. The bow provides ample coverage so as not to veer into the “too revealing” territory, but its delicate, flowing shape offers up a very specific brand of softness. It’s intended to signify a certain degree of playfulness. We are, after all, talking about a shape named after the bows tied around the necks of kittens and cats.

But ever since 2016, the style has taken on another meaning. In October that year, Trump’s infamous Access Hollywood tape leaked, in which he can be heard bragging about sexually assaulting women. In the audio, he said that he might start kissing a woman as soon as he meets them. “I don’t even wait. And when you’re a star, they let you do it. You can do anything. ... Grab ‘em by the p*ssy. You can do anything.”

Just two days after the tape was made public, Trump and Hillary Clinton were set to meet for the second of three presidential debates. Given the content of the recording, all eyes were on Trump’s third wife, Melania. And she certainly made quite the sartorial statement by arriving at the debate in St. Louis wearing a fuchsia pussy bow blouse by Gucci. The internet wasted no time pointing out the irony.

Is it possible Harris was sending a subtle dig at the Trumps with her wardrobe choice for Coney Barrett’s hearing? Definitely. It’s also possible that as a high-profile woman in politics, Harris is most comfortable sticking with traditionally safe silhouettes.

She’s worn similar styles at previous public appearances, most notably at the Democratic debate in Atlanta last November, when she was still a presidential hopeful. There, she opted for a red silk pussy bow blouse, also layered underneath a gray blazer.

What is clear is that Harris was obviously trolling Coney Barrett by placing the RBG book right where everyone could see it during her questioning. But perhaps it was less a troll than it was a reminder.

With Republicans poised to ignore the late justice’s dying wish — and Coney Barrett being a willing participant in what many regard as an illegitimate nomination process — it should come as no surprise that Harris is taking matters into her own hands to remind everyone of what’s really at stake.

More like this
I Tried Kendall Jenner's No-Pants Look As A Plus-Size Woman
By Sarah Chiwaya
30 Of Kendall Jenner’s Best Runway Looks To Date
By Dominique Norman
Looking Back At Kylie Jenner's Best Fashion Week Looks
By Allie Fasanella
All Of Doja Cat’s Wildest Paris Couture Week Looks
By Dominique Norman
Get Even More From Bustle — Sign Up For The Newsletter
From hair trends to relationship advice, our daily newsletter has everything you need to sound like a person who’s on TikTok, even if you aren’t.