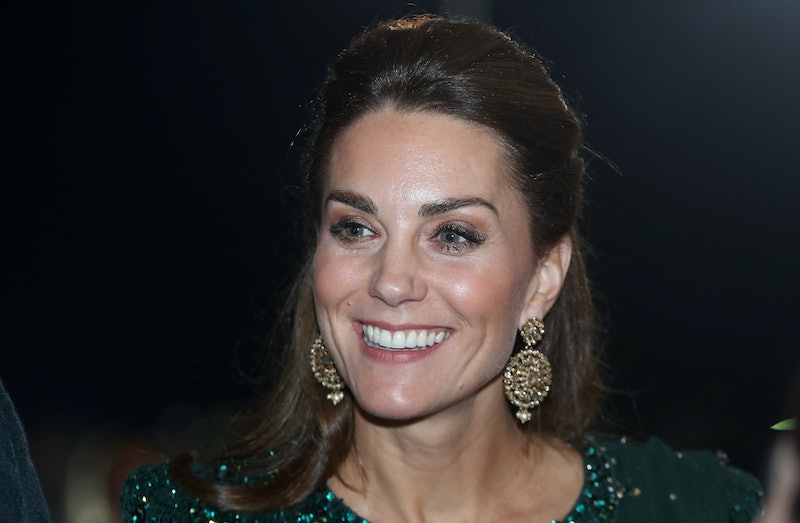 The royals know how to do glamour. If you've watched even a single royal wedding, you're not stranger to that fact. While on a royal tour in Pakistan, Kate Middleton wore a Jenny Packham gown that featured head-to-toe sequins, proving this Duchess knows how to go glam.

Middleton and her husband Prince William just began their royal tour and on Oct. 15, a luxe reception was hosted by the British High Commissioner in Pakistan at the country's capital, Islamabad. According to Harper's Bazaar, the pair arrived at the event via rickshaw, and Middleton stepped out in a head-to-toe sequin gown by Jenny Packham.

The floor-length gown featured a high, round neckline and heavy beaded embroidery along the bodice. Around the waist, additional jewels were added for a belt-like effect, and the wrists were also embellished with even more glittering gems. Over her shoulder, Middleton added a traditional dupatta in a sheer, matching emerald green with fringe along the bottom.

As for jewelry, Middleton kept things ultra minimalist. With her recently highlighted hair pulled half back, fans could see a pair of intricately patterned round earrings from O'Nitaa. Of course, she was wearing her sapphire engagement ring. With all those sequins, it's no wonder she chose to wear minimal jewels because, well, she was the jewel.

The tour has featured more than one of Middleton's favorite designers. While she often wears Jenny Packham for evening events, Catherine Walker is certainly one of the Duchess' most well-known staples for day time appearances, and that's been no different while she's in Pakistan.

Middleton's first ensemble while visiting the country with her husband was a light blue Catherine Walker calf-length dress paired with matching trousers. According to Harper's Bazaar, the look was reminiscent of one that Princess Diana herself wore while in Pakistan.

Both of the looks prove that when it comes to her style, Middleton's definitely playing favorites. While she does switch up who she's wearing — like when she chose a Sleeping Beauty-esque pink Gucci gown — the Duchess of Cambridge is loyal to designers she loves, and two of her most common rewears happen to be Jenny Packham and Catherine Walker.

Middleton often looks to Packham's designs for more formal, black-tie events, even donning her dresses more than once for certain occasions. Last November, the Duchess attended the Tusk Conservation Awards with Prince William in a stunning turquoise Packham gown. Turns out, it wasn't her first time wearing it. She also wore the dress six years prior in 2012. A dress that can be just as chic six years after its debut is certainly worth keeping.

As for Catherine Walker, Middleton relies on her coat dresses most commonly for official royal events. Not only did she choose to wear designs from the label to Christmas Mass last year, but she's worn Walker's pieces multiple times throughout 2019, including when she appeared with brother-in-law Prince Harry at Anzac Day services while Meghan Markle was on maternity leave.

Middleton may have access to some of the most well-known names in fashion, but this Duchess still has favorites. Maybe royals are more like you than you thought.

More like this
Harry Styles Brought Nipples & Sequins To The Grammys
By El Hunt
Camila Cabello Wore A Pearl Bra On The 2023 Grammys Red Carpet
By Alyssa Lapid
Lizzo Wore A Spicy Bustier Gown On The 2023 Grammys Red Carpet
By Alyssa Lapid
Taylor Swift’s Glitzy Grammys Look Is Giving Midnights
By Alyssa Lapid
Get Even More From Bustle — Sign Up For The Newsletter
From hair trends to relationship advice, our daily newsletter has everything you need to sound like a person who’s on TikTok, even if you aren’t.