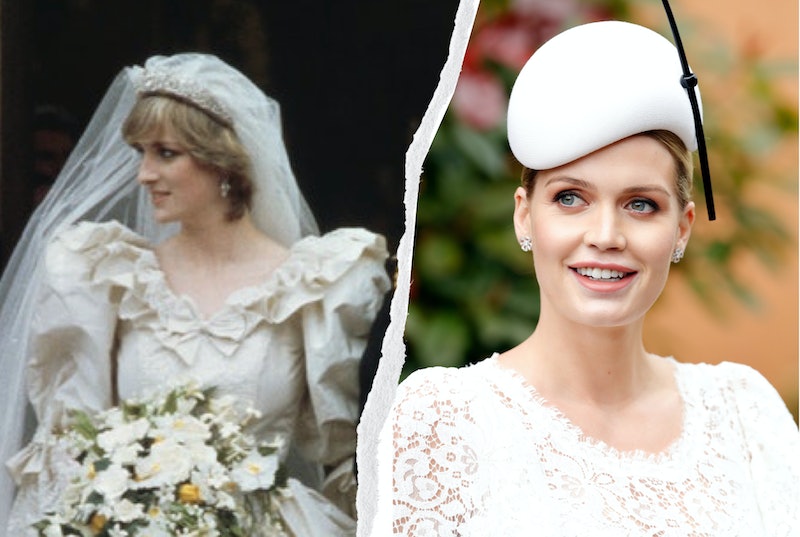 Princess Diana’s niece, Kitty Spencer, was married on July 24 to Michael Lewis, chairman of Foschini Group. The pair tied the knot in Frascati, Italy, with the bride donning not one, not two, but five dresses throughout the weekend’s festivities. And Hello Magazine points out that Spencer’s wedding ceremony dress gave quite a few nods to her late Aunt Princess Diana’s 1981 gown in both its style and silhouette.

Kitty Spencer’s gown was made of an intricate lace and featured a turtleneck, long sleeves, and a structured corset bodice that was just barely visible below the top layer of sheer lace. While several details were similar on both Princess Diana and Kitty Spencer’s dresses — like the fitted bodice, lace detailing, and long sleeves — there are two shared design flourishes that really stood out.

First, both Spencer and Princess Diana wore dresses with elaborate shoulders. Princess Diana wore ‘80s-style puffed sleeves made of silk taffeta, while Spencer’s lace sleeves had a slight touch of volume on each shoulder, the 2021 version if you will.

Likewise, they both chose dramatically long trains and veils. Princess Diana’s wedding dress featured a train that measured 25 feet in length and the veil was made of 153 yards of tulle. Spencer’s long veil and train didn’t make history like Princess Diana’s, but it certainly followed in her footsteps. Perhaps Spencer was inspired by her late Aunt’s iconic dress, which still has great influence even today.

But there were differences in the gowns to be sure. Diana’s gown was made of a heavy silk taffeta, but Spencer’s choice of lace insured that it wouldn’t wrinkle like her aunt’s had. Additionally, while the trend of the 1980s was large, voluminous silhouettes, Spencer opted for a slim-lined skirt instead.