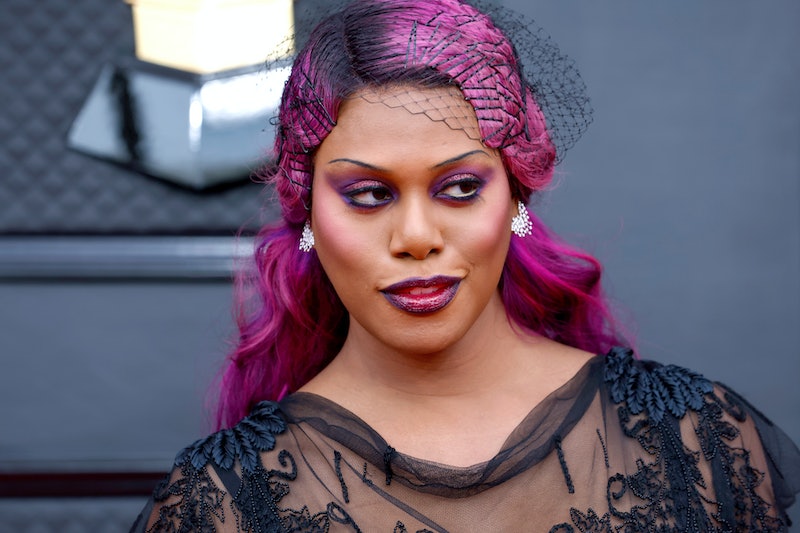 Looking nothing short of sultry and boldly glamorous, actor Laverne Cox just made a serious statement on the Grammys red carpet. Paired with her hot pink hair, the Promising Young Woman star rocked pencil-thin eyebrows à la ’90s It girl Pamela Anderson — proving that the oh-so-nostalgic trend is taking the beauty world by storm, whether you like it or not.

While Cox’s last appearance on the Grammys red carpet was back in 2017, the Orange Is The New Black alum didn’t disappoint with her return to the event — especially considering her chic and colorful monochromatic glam. The star wore bright fuchsia strands (!!!), which softly framed her face, and she wore the same bright pink hue on both her eyes and lips, the latter of which featured an ombré-style finish.

You’d think bright pink hair would be the standout feature of Cox’s beauty look, but it was not to be overshadowed by her thin, high arches — further proof of the resurgence of the ’90s trend (one that millennials likely have very mixed feelings about). Controversial or not, it seems a growing list of A-listers are totally here for the thin brows comeback: Supermodel and streetwear icon Bella Hadid has notably made a serious case for the style, while Lily James revived the iconic glam in her portrayal of Anderson in Hulu’s recent hit series Pam & Tommy.

Whether it’s the #Pamcore effect or simply another ’90s trend resurfacing, there’s just no telling which celeb will be trying out pencil-thin arches next.