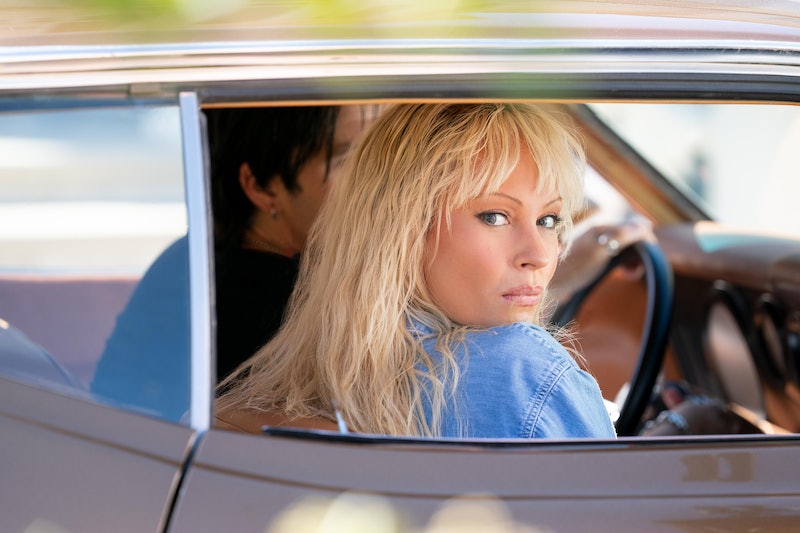 When you catch a glimpse of Lily James running on the beach in that iconic red swimsuit, it’s easy to think you’re looking at Baywatch footage of Pamela Anderson herself. While the resemblance is masterfully uncanny, a lot of time and effort (and prosthetics) went into James’ transformation for Pam & Tommy.

Anderson was a beauty icon in her own right during the ’90s: Her bleached-blonde mane, super thin, defined arches, high-contrast lip liner, and smoky eye were emblematic of the decade, and it’s an aesthetic Gen Z has recently been trying to emulate (just look at #Pamcore on TikTok). But it’s this stark familiarity with Anderson’s look that put some pressure on the glam team behind the Hulu series. “The upside of doing people that are as famous as Pam is that you have a lot of images to pull from to create those looks,” says David Williams, the makeup department head for the show. “The downside is everybody’s seen them, so you don’t have a lot of room for error.”

To morph James — an English actor with naturally dark hair and thick brows — into Anderson, the makeup team had to apply a forehead prosthetic before even starting on her hair or makeup. This served two main purposes: It pushed James’ hairline back so it’d more closely match Anderson’s, and it created a canvas for recreating her signature thin eyebrows — aka one of the Baywatch star’s most recognizable features. According to Williams, the team initially debated between either shaving James’ brows or using brow covers. “Lily’s brows are so pronounced and strong and full, so if you were to just put a cover over them, it would’ve been too much brow bone evident,” he tells Bustle. “And I didn’t want to pluck or wax them, as doing those over the course of four to five months’ worth of shooting can cause the hair to permanently not grow back.”

The issue with shaving — as anyone who took a razor to their brows in the ’90s knows — is that you’ll still be left with the slightest bit of stubble, Williams explains. “Paint can cover it, but it can’t do anything about the shadow that’s created by something that is not smooth on the skin,” he says. So, in order to nail those Anderson-style arches, special makeup effects designer Jason Collins of Autonomous FX created a prosthetic forehead piece onto which hand-sewn faux brows — by special effects hair technician Sasha Camacho Van Dyke — would be glued. And on each shoot day, James was given a new forehead prosthetic with its own set of arches.

Once that was put into place, Williams had his base structure to work with — and he didn’t have to do anything further to transform James’ arches into Pam’s, though he did use an Anastasia Brow Pencil underneath where the sew-on brows were placed. “Instead of putting any product on top of the brow, that gave the slightest bit of a shadow underneath, which then further enhanced that look of realism that there might be a little pencil on there,” he tells Bustle.

Another key element of James’ metamorphosis was a regular spray tan. “That would be a base of color for her, and on top of that, we sprayed European Body Art all over her body to further even out that color,” says Williams. For her beach-babe glow, he used the Lancôme Teint Idole — a long-wear foundation Williams considers “tried and true.” On top of that, he turned to contour, highlight, and shadow techniques to solidify James’ facial structure as Anderson with the Make Up For Ever HD Professional Palette, IT Contour Palette, and Make Up For Ever Waterproof Concealer.

As far as eye makeup went, Williams would typically do a heavy black eyeliner for a smoky look with the Make Up For Ever Aqua Resist Color Pencil, which he topped off with brown or black shadow. Some of his go-to's were Tom Ford’s Cocoa eyeshadow and Mystic from Chanel’s Les 4 Ombres Eyeshadow Quad. “On the cheeks we used the Stila cream blushes to give her the peaches and cream look,” he tells Bustle.

Then there was the task of replicating Anderson’s very ’90s lip, so plenty of lip liners and neutral lipstick shades were kept on hand. “On the lips, there was a myriad of everything, from the original Bobbi Brown 10 Lipsticks [discontinued] to Chanel Nude Liner — the original one that had been discontinued, and the nude beige that’s currently out there,” says Williams, who also turned to some of the era’s most popular liners for the job: M.A.C.’s Spice and Chanel’s Vamp. To complete the pout, he used either Charlotte Tilbury’s Pillow Talk or a rose or beige shade from Hermes.

To shoot the iconic Baywatch beach scene, the actors couldn’t exactly hide from the paparazzi. When those photos were released to the public, Williams says it was surprisingly rewarding. “I was really nervous that day because it was such a big, big thing,” he says. “Everything from the side boob to the bathing suit and the tan, we did all that we could to create this look. And when we saw her running down the beach, we all knew in the moment, ‘This is good.’”