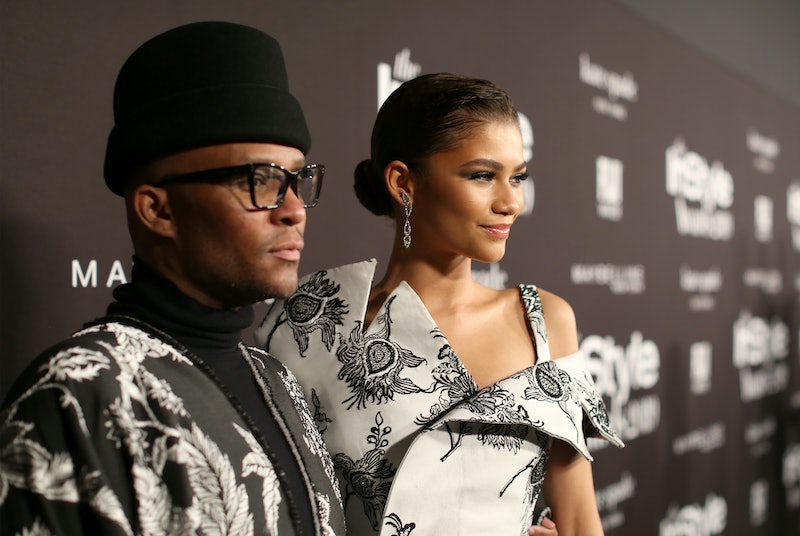 While the grief and pain felt by Black people in the current social climate has manifested itself in a multitude of different ways — from taking to the streets to feelings of helplessness — a prevailing goal has emerged: To uplift and support the community however one can. For stylist and self-proclaimed image architect Law Roach, that means investing in his hometown of Chicago and encouraging others to do the same through The fLAWless Fundraiser.

A collaboration between Roach and community revitalization nonprofit Rebuild The Hood, proceeds of the initiative will fund grants for Black-owned fashion and beauty businesses impacted by recent demonstrations against police brutality and systemic racism. Launched on June 24, the fund has already reached its $100,000 goal.

“When I first announced that I was going to donate my money to a fund, it took three weeks for me to actually put the link up because I wanted to make sure that I was doing it right,” Roach tells Bustle. “It was important for me to partner with an organization that was a true not-for-profit because I knew a lot of my friends and family would donate their hard-earned money. I wanted to work with a legitimate 501(c)(3) and I also wanted to partner with a group that had a track record of working in the communities I wanted the money to go to.”

Known and celebrated for his work with Celine Dion, Zendaya, and a host of others, Roach, 41, credits much of his success to his Chicago upbringing. “I grew up in tough neighborhoods, but that built me and gave me my resilience and hustle,” he says. “Chicago is woven into the fibers of who I am as a person.”

Before moving to LA in 2011 to pursue styling, Roach opened and helmed a vintage boutique in Chicago’s Pilsen neighborhood called Deliciously Vintage, which he closed shortly after relocating. He describes the recent damage to the area as “necessary chaos” — a casualty of a movement that’s forcing the country to address the centuries-long oppression of Black people.

“The fund is our way of saying, ‘We’re going to be here to help you rebuild,’” Law says. “Hopefully we’ll hit $100,000 soon, and I’ll immediately put out the guidelines and criteria for applying to the fund and we’ll start taking applications. I’ll document that process throughout and I’m excited to do that.”

"I’m being a professor for so many white people who are just now realizing that racism exists. I’m explaining why protesting, rioting, and looting made sense, and it’s exhausting."

The work is a welcome departure from Roach’s typical schedule of showroom appointments, travel, and fittings, especially amid the COVID-19 pandemic and the recent police killings of Black people. “To be 100 percent honest, I’m damaged,” Roach says. “Mentally and emotionally, I’m not the same person that I was prior to COVID-19. I’ve worked every single day for the last six years and I’m thankful for the success I’ve had, but it kept me really busy. Having that taken away really forced me to sit with my thoughts and question my validity as anything other than a stylist. That was tough, asking, Who am I really without my job?"

The killing of George Floyd presented another toll. “Not only witnessing it one time, but witnessing it over and over and over again — it’s traumatizing,” he says. “On top of that, I’m being a professor for so many white people who are just now realizing that racism exists. I’m explaining why protesting, rioting, and looting made sense, and it’s exhausting. So, I’m a fraction of the person that I was before March, but I’m OK with that. This small thing that I’m doing to make a difference in my industry is helping me rebuild internally a bit.”

In addition to the fLAWless Fundraiser initiative, Roach is among many calling for changes in the fashion industry, which has a long history of excluding, mistreating, and disenfranchising Black people. “It’s no secret that I’m thriving in an industry that hasn’t helped other people who look like me work at the level that I do,” he says. “I beg of my industry — with all these initiatives and posts and statements on how things can change — that it’s not just a PR stunt. I hope that people and brands really do mean this and that it’s not just all for show or to appear woke.”

"It’s no secret that I’m thriving in an industry that hasn’t helped other people who look like me."

Overwhelmed by the response to the fundraiser — it amassed more than $83,000 in its first 24 hours — Roach considers establishing the fund a career highlight. “This is a different type of victory for me,” he says. “Usually it’s: I was the first person to get a dress right off the runway, or the first person to put my client in something. Those are the things that I’ve been proud of for so long. This beats out all of them.”

The fLAWless Fundraiser has currently raised $100,050. Learn more about the fund or make a donation here.

This article was originally published on July 2, 2020