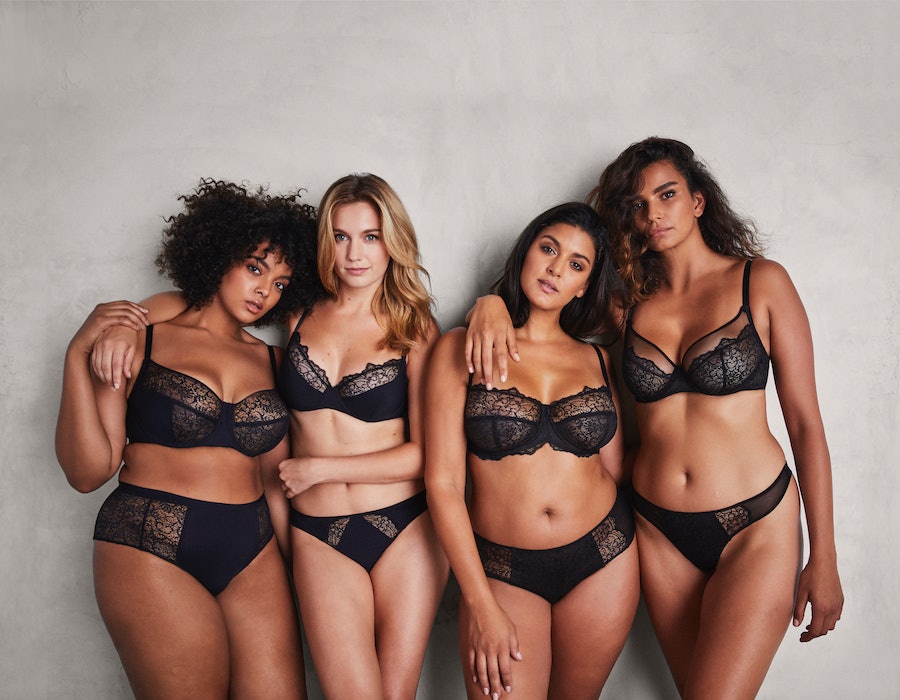 Like so many entrepreneurs, Amber Tolliver started her business to address a glaring gap in the market. A frustrated 32E bra shopper, she struggled to find a bra that looked good but that actually, well, fit.

“Women are not one dimensional,” Tolliver tells Bustle. “Women want to feel like they’re being represented and want to feel good in their clothing. You have to make things that fit them and have their body types in mind.”

Enter Liberté, a size-inclusive lingerie line that features bra sizes from 32C to 38H and underwear from XS to 2XL. Tolliver founded the brand in 2019, and it’s quickly become a direct-to-consumer darling in the increasingly competitive world of lace bralettes and briefs.

“The cage that has been the standard in the industry has been broken open,” she shares. “But there’s still a ton of room for improvement when it comes to size inclusivity and general diversity, whether it’s in the styles or in the shades of nudes that we offer. There’s a lot of room for us to push the envelope even further.”

Most recently, Liberté launched a collection at Journelle, a go-to destination for luxury lingerie. It’s a major move for the young brand. “It’s a really beautiful and wonderful moment to know we’ve been brought into the fold of the lingerie industry,” Tolliver says. “People are accepting us in the same space that they would accept and embrace other well-established brands. That just feels very good.”

Still, being a young, small business comes with challenges. And in the middle of a pandemic, those challenges can get overwhelming quickly. Tolliver is using the uncertainty of the moment to lean into what motivated her to start Liberté in the first place.

“Instead of trying to keep up with trends and overstepping our abilities, it’s really been about focusing on that community aspect of engaging women and introducing our product — which is still, again, very new — to as many people as we could,” she explains.

Originally, Tolliver had planned on crisscrossing the country to promote the brand, hosting live events and attending trade shows. Of course, 2020 had other plans. “As soon as COVID hit, that completely shifted everything we had planned. We had been planning to do in-person events across a number of cities.”

Instead, the marketing plan pivoted to IG Lives and virtual panels. “We’re serving our community in a way that they want and need,” she says. “The idea is to really pare down as much as we can while engaging as many people as we can.”

Another test came when the Black Square Phenomenon made its way around Instagram following calls for more transparency on race relations from brands and corporations. But for Tolliver, amplifying diverse voices has always been a central part of Liberté’s ethos.

“Our first lingerie shoot for Liberté was with a beautiful model from Burkina Faso, she was bald and glorious,” she says. “So, right out of the gate, this dark skinned, beautiful Black model was the face of Liberté, and that was the whole point for us. This idea of freedom — this against the grain, no need to conform, unsubscribed from industry standards and societal norms — all of that went out the window from the very beginning.”

Her advice for brands finally having their long overdue moment of racial reckoning? Black squares are fine, but real change happens when hiring and funding decisions are made.

“You could be making sure that all of your models are diverse, that your team is diverse, and if it’s not, ask yourself why,” she says. “Then actively fix whatever that blockade is or remove that blockade to make sure that your team, your marketing, every aspect of your business is diverse. For me, it goes back to intention. If you don’t think these actions are important, then you’re going to be accused of having a performative response, and people will be justified in calling you out.”