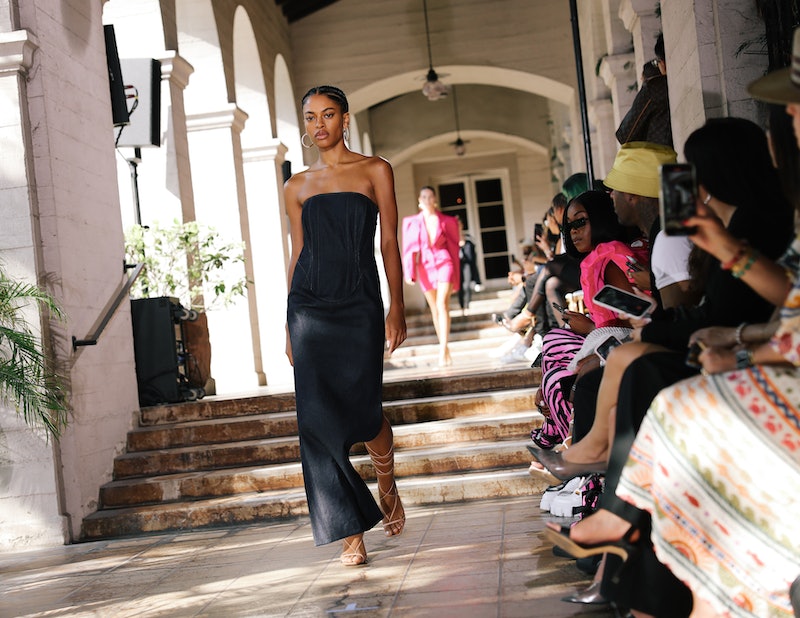 Latoia Fitzgerald loves astrology — so much so that her sign influenced the name of her fashion line, Lionne.

“I’m a Leo, so I look a lot into lions, and I love everything the female lion represents,” Fitzgerald tells Bustle. “I wanted to do something that represented the lioness, so I picked the French pronunciation of lioness. It’s about everything she represents — hunting for the food, taking care of each other’s cubs, and the way she carries herself.”

A lioness, the 35-year-old designer explains, walks around with her head high and unbothered. “Because she’s feisty, but it’s this mysterious thing about her,” Fitzgerald says.

It’s also an apt description of the Fall/Winter 2021 collection of Lionne, the ready-to-wear brand Fitzgerald launched in February 2018. The newest offering features fluid gowns and structured separates that are visually striking but also leave room for interpretation.

At the debut fashion show in Los Angeles on August 15, attended by the likes of Jhené Aiko, Karrueche Tran, and La La Anthony, Fitzgerald wowed the audience with a silky white halter-top gown that could serve as a weekend brunch outfit or a bridal look for a beachfront elopement.

Lionne’s target consumer is someone who doesn’t shy away from either option. “She’s a girl that likes to be sexy, but she’s also very classy, mysterious, and has an edge to her,” she says. “So I love a high slit, a low back.”

But she also leaves room for more traditional menswear elements, like boxy dress shirts and sharp-shouldered suiting. And some of those designs have already garnered their share of imitators.

“I did a white button-up bodysuit called the Amina bodysuit, and this thing has been copied from every wholesaler you can think of,” she says. “It’s amazing how they copy this bodysuit. I mean, I see it in everyone’s boutique.”

But Fitzgerald is finally getting some credit — and her moment in the spotlight. Her runway show, which included names like Slick Woods, Duckie Thot, and Leomie Anderson in the model cast, even brought one celebrity guest to tears.

“Karrueche literally made me cry because she cried when she got backstage because she was so happy for me,” Fitzgerald says. “And every time someone cries, that’s the moment I get emotional because for me mentally, I just want to keep going.”

As for what’s next, dressing Zendaya ranks near the top of the list.

“I see some sort of cutout in the right area, with tailored, structured shoulders, and in color,” she says. “Everything looks good on her.”

Also on her vision board: the eventual expansion of Lionne and taking it from a celebrity-favorite line to a full-fledged lifestyle brand.

“In five years, I see it being a household name,” Fitzgerald says. “Not only having clothing, but I want to do menswear and home decor, too.”

For now, she’ll continue selling directly to consumers and hopes eventually to move into a brick-and-mortar space. Most importantly, though, is the role she sees herself playing in the return of, in her words, “real fashion.”

“I miss fashion — I miss John Galliano days with Dior,” she says. “Right now, it’s a lot of fast fashion going on with a lot of monogrammed stuff, and I just miss real fashion. And I think it’s going to come back.”