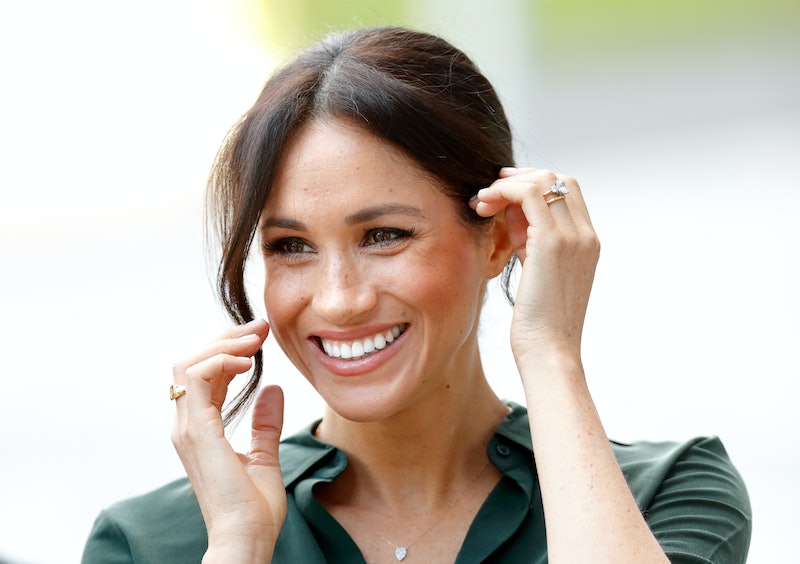 Meghan Markle and Prince Harry sat down on Sunday evening for a much-anticipated two-hour interview special with Oprah. The day after the sit-down taping, the couple walked the grounds of their new home with Oprah, showing off their dogs, chickens, and a chicken coop adorably named “Archie’s Chick Inn.” Meghan Markle's Chick Inn outfit included a pair of skinny jeans, an oversized white button-down shirt, a hooded utility jacket that looks to be a current item from J.Crew’s Spring collection, and Hunter wellies.

Though her Chick Inn tour ensemble was more casual than her dress for the sit-down interview, it was just as stylish. For the latter, she wore an Armani silk wrap dress, Aquazzura pumps, a Pippa Small pendant necklace, and Princess Diana's tennis bracelet. The dress featured a lotus flower print, which is believed to symbolize revival and a will to persevere. Prince Harry's outfit also had a hidden meaning. He chose a J.Crew suit with a connection to Archie, as he wore it previously at his son's first official photo shoot and christening.

Out of all their Oprah interview looks however, Markle's Chick Inn outfit is perhaps the most accessible and easy to recreate. Though her shirt and jeans are largely unidentifiable, you can shop affordable dupes, plus her exact Hunter boots below.