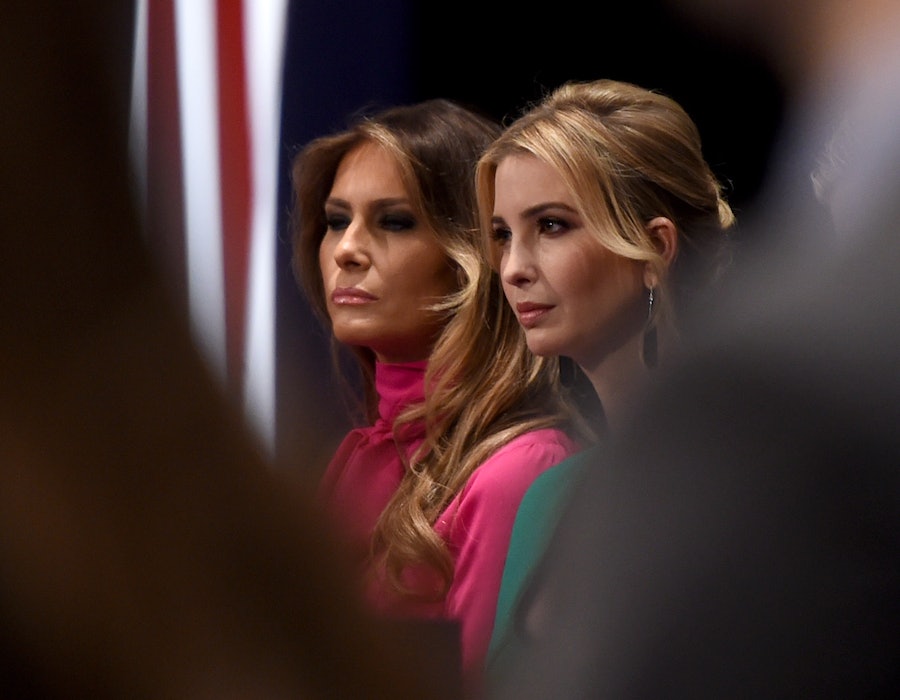 The first debate took place Tuesday night, and it was certainly… something. Alongside the night's many unforgettable moments, Twitter users couldn't stop talking about Melania & Ivanka Trump's presidential debate suits — and they had strong opinions about them.

The Trump women are always keen on making a sartorial statement — who among us can forget Melania's “I really don’t care, do u?” jacket worn to visit detained immigrant children at the Texas-Mexico border? — and Tuesday was no exception. For the debate, Melania and Ivanka chose two dramatically contrasting suits.

The First Lady wore a black pinstripe suit by Dolce & Gabbana, accessorizing with navy suede pumps from Manolo Blahnik. The dark color struck a somber note, with some Twitter users remarking that it was more suited for a mob boss.

Their white suits are noteworthy as the look has long been considered a symbol of modern feminism. In fact, women lawmakers wore white at the 2019 State of the Union address to acknowledge the suffragette movement and to silently protest the Trump administration's policies. And Hillary Clinton was praised during her presidential run for reinvigorating the pantsuit as a symbol of women's empowerment. It's even more significant, then, that Melania's look seemed to clash with Ivanka and Kimberly's coordinated visual statement.

Melania's suit also can be considered polarizing for the label she chose. Not only is Dolce & Gabbana based in Italy — a rejection of Donald Trump's "America First" agenda — but it's also viewed as a pariah by many in the fashion industry. The label has been embroiled in several controversies, from the racist ads it ran in China to homophobic and size-ist comments made by its designers.

Melania and Ivanka did agree on one sartorial detail. While Donald Trump spent most of the pandemic downplaying the effectiveness of masks, his wife and daughter chose to wear face coverings as they made their way to their seats before the debate began. Donald, by contrast, kept his face mask inside his pocket.

More like this
5 Signature Accessories Carrie Bradshaw Wore Over & Over Again In SATC
By Dominique Norman and Kelsey Stiegman
I Tried Kendall Jenner's No-Pants Look As A Plus-Size Woman
By Sarah Chiwaya
Spring 2023's Hottest Shoe Trends Include Moto Boots, UGG Minis, & More
By Allie Fasanella
12 Red-Hot Valentine's Day Outfits Perfect For The Holiday Of Love
By Dominique Norman and Kelsey Stiegman
Get Even More From Bustle — Sign Up For The Newsletter
From hair trends to relationship advice, our daily newsletter has everything you need to sound like a person who’s on TikTok, even if you aren’t.