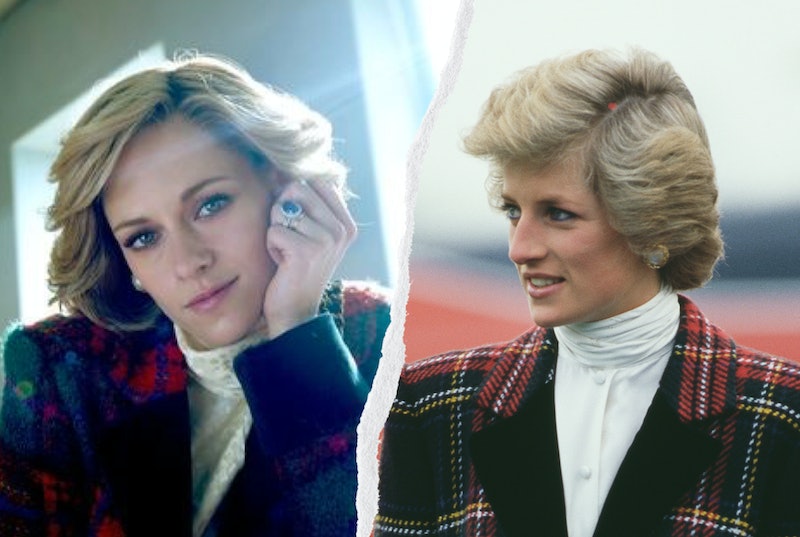 Princess Diana’s jewelry is among the most iconic in the world. And in anticipation of the new biopic about her life, Spencer featuring Kristen Stewart, the world is waiting with bated breath for a sneak peek of the fashion. The first teaser was released back in January, but there was no prominent jewelry featured. On Thursday, a new portrait of Stewart as the Princess has been released, with the actress wearing a silk turtleneck blouse, plaid tweed blazer, pearl earrings, and, yes, a Princess Diana engagement ring replica made for Spencer.

While costume designers are often merely inspired by historical fashion pieces as opposed to copying them exactly, there are several major differences between Princess Diana’s engagment ring and the Spencer replica.

For starters, the stone looks to be a completely different color than Lady Di’s Ceylon sapphire, though it could just be the lighting. Secondly, the diamonds that surround the oval-cut sapphire appear out of proportion from the original.

Diana’s ring was also set on a single elegant and clean shank, but Stewart’s features a six-prong pavé setting, a trend that didn’t surface until almost a decade after the Princess’ engagement ring was designed.

Needless to say, social media has some strong feelings about the ring. See below for all the Twitter chatter about Princess Diana’s engagement ring replica — both good and bad.

In A State Of Shock

Perhaps Etsy Was The Way To Go?

Of Course Amazon Has A Dupe

It’s All In The Details