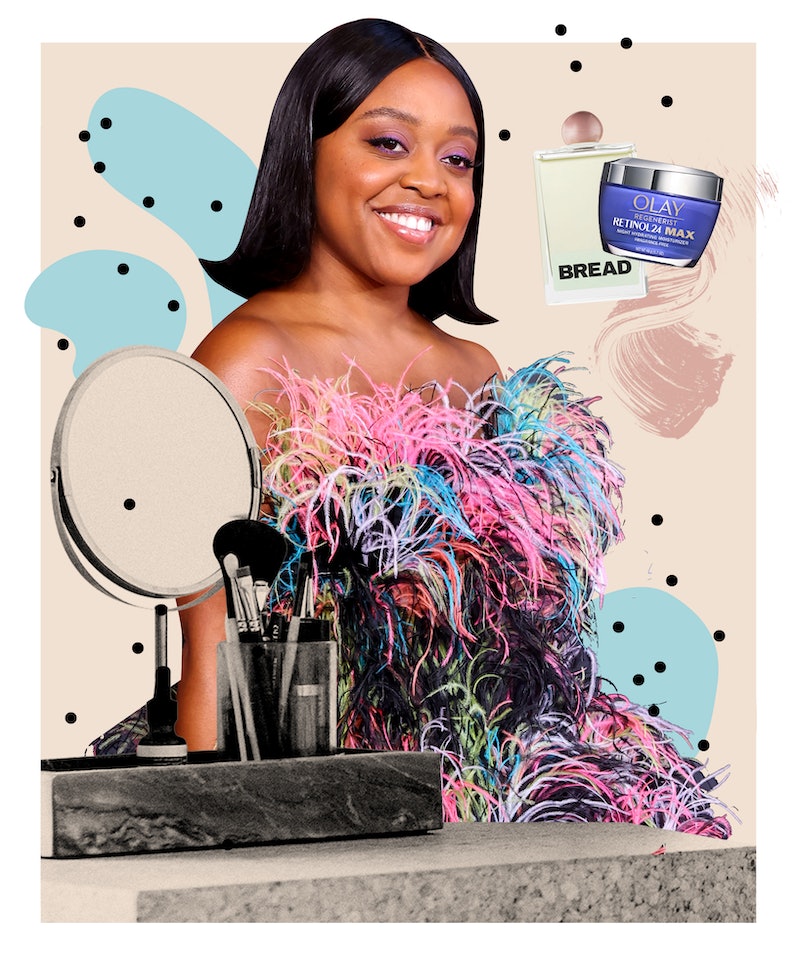 In Bustle’s Beauty Detail, we dive into the beauty bags of our favorite talents for intel on the rituals that keep them glowing and the MVPs (most valuable products) they can't live without. Here, Quinta Brunson talks to Bustle about preparing for the 2022 Emmys, maintaining a simple skin care routine, and creating television that evokes feelings of familiarity and comfort.

Quinta Brunson wears many hats: writer, comedian, actor, and creator-slash-executive- producer of the critically-acclaimed series Abbott Elementary. And while beauty didn’t play the biggest role in her life growing up (with the exception of a thick eyeliner and mascara phase during her teenage years that she credits to Avril Lavigne, Nicki Minaj, and Gwen Stefani), her position as the face of Olay is a pretty fitting new role.

Over Zoom, the Emmy-nominated star and Philly native tells me that her mother always stressed the importance of cleansing and moisturizing. “I wear more makeup now than ever, but what remains the same is having the basics,” Brunson says. She adds that she’s gained more knowledge about foundations, concealers, and other makeup while getting glam for Abbott Elementary and red carpet events, yet always prioritizes skin care. “[F]or me, moisturizer [is] the first step before doing anything else.”

At the 2022 Emmys ceremony on Monday, Sept. 12, Abbott Elementary is up for seven awards and Brunson is the first Black woman to earn nominations across the three major comedy categories: Outstanding Comedy Series, Outstanding Lead Actress in a Comedy, and Outstanding Writing for a Comedy Series. How does one prepare for such a momentous career moment? She tells me with a laugh that she’s mainly doing two things — not worrying about it and taking care of her skin.

Many Abbott Elementary fans (including myself) turn to the show for a daily dose of joy in their lives. When I tell Brunson that it’s what I put on repeat for when I need some comfort, she says that’s why she created it in the first place. “I have shows that also do that for me, like The Office, King of Queens, and Friends, [that] I can just pop on and just do other things but the familiarity of [those shows] helps you to feel comfortable and calm. I love TV like that,” she says. “That was very much part of the reason for creating Abbott, to give people more TV like that.”

Of course, Brunson’s success didn’t come overnight. She says one of the things she has learned about pursuing one’s dreams, other than the unwavering belief in your own abilities, is the importance of ridding yourself of rigid, self-imposed deadlines.