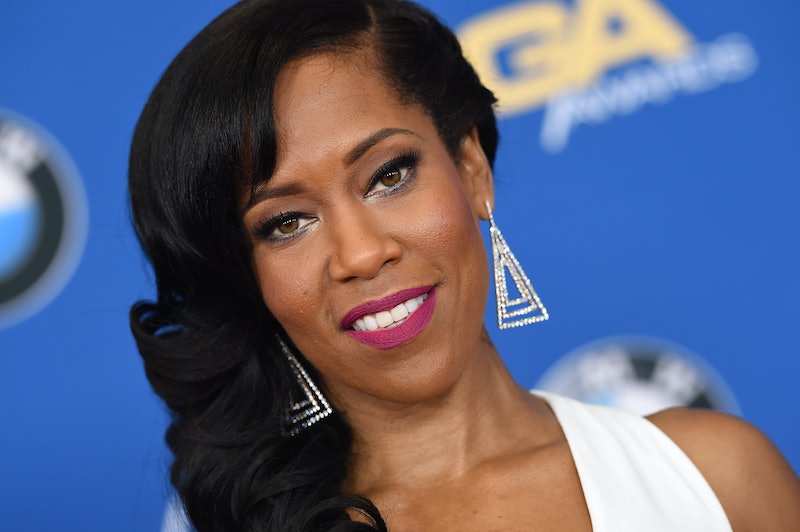 Regina King just won big at the 2020 Emmys for her performance in Watchmen, and took the opportunity to honor the Black Lives Matter movement. Instead of pajamas or a gown, King chose a tailored suit from Schiaparelli Couture paired with a deep black graphic tee that had Breonna Taylor’s face on it, below the words “Say Her Name.”

The T-shirt is actually one that she shared on Instagram more than a month ago, the front of which stated “Arrest the cops who killed Breonna Taylor.” It seems that for the Emmys, King chose to wear the tee backwards, assuring that everyone would be able to clearly see Taylor’s face beneath her suiting.

When shared on Instagram, King wrote, “Too often Black women who die from police violence are forgotten. Let’s stay loud, keep demanding justice for Breonna and her family, and SAY HER NAME."

The T-shirt was designed by brand Phenomenal, in partnership with the Breonna Taylor Foundation. All profits from the sales are donated to the Foundation.

King wasn't the only one to honor Breonna Taylor with her look at the Emmys. Uzo Aduba, who won for Best Supporting Actress in a Limited Series or Movie, wore a black shirt with Taylor's name rendered in white cursive writing.

Though the Emmys are not being held in a traditional format this year, due to the Covid-19 pandemic, King and Aduba are joining their nominated peers in bringing light to national and global issues that deserve more than just a moment of recognition.