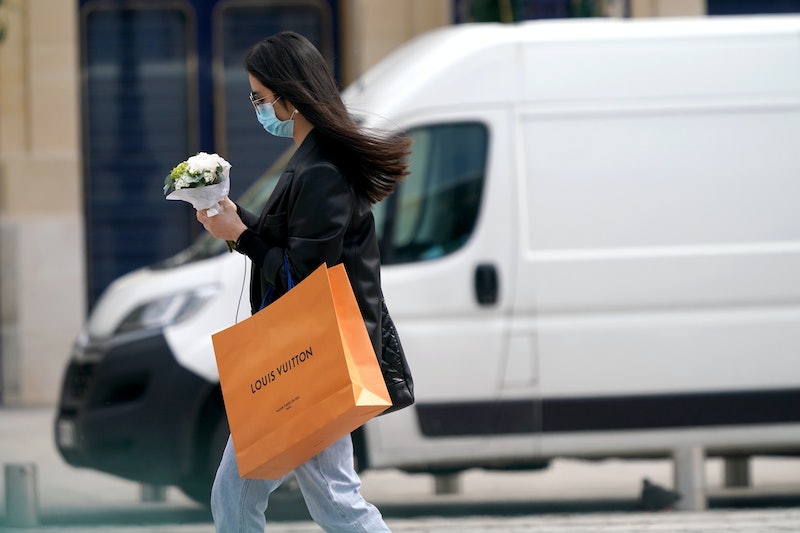 Now in month eight of working from home, it’s hard for April Koza to recall what her days were like pre-pandemic. The FWRD vice president’s routine of dropping her kids off at school, grabbing a coffee, and heading to the office for meetings with buyers and budget reviews seems like a distant memory. “What I miss most was the creative aspect that was so natural while in the office,” she tells Bustle. “Thinking of a cool new idea for an email or homepage feature, and then pulling buyers in my office to flush the idea through.”

The current pandemic, coupled with widespread calls to upend systemic racism, has forced the fashion industry to change the way it operates at every level. While buying offices aren’t the most visible entity to consumers, they wield tremendous power and influence when it comes to growing brand profiles, popularizing trends, and increasing the visibility of retailers.

Traditionally, a buyer’s job entails what Koza recalls, plus attending fashion shows, meeting with designers, and seeing clothes in person to determine what to purchase season after season. But very few professions are operating in a traditional manner these days, and instead of running from meeting to meeting and collaborating in offices, buyers are reviewing collections from a computer screen and placing orders virtually. They’re also now tasked with predicting trends and buying habits when both are increasingly hard to gauge. Add to that the work being done to make the fashion industry more equitable and inclusive, and buying looks much different than it did in February.

With the unpredictability of the world right now, our customer wants a wardrobe that is as flexible as her plans.

Divya Mathur, chief merchant at Intermix, says that while she misses coffee breaks with colleagues and chatting with brand reps at market appointments, she’s actually able to get more done working outside of the office and is impressed with how the industry is adapting. “We’ve been really reliant on the amazing partnerships with our brands, who’ve created virtual lookbooks with video of clothes on model, sent entire collection samples out to us, and hosted endless Zoom market appointments with very detailed swatch books that are then sent to us,” she says. “It amazes me how quickly an industry that has been defined by a high-touch, in-person way of working has pivoted to working virtually.”

And though the adjustment period has been challenging, the slower work pace and time to reflect have been welcome in many ways. “It’s the first time we’ve ever really been ‘grounded,’” says Koza, though she adds that some aspects of the job remain challenging. “It was always so difficult to manage a tight window with tons of appointments and order deadlines, [and] now it feels like we’re in a neverending market period. I had hoped that brands would get on the same schedule, but it’s been quite the opposite actually”

Other adjustments include what buyers are actually purchasing. “We still get some ladies wanting to treat themselves to a luxury piece,” says Connie Martinez, vice president of buying and merchandising at 11 Honoré. “Especially pieces that are seasonless and timeless.” To that end, cashmere sweaters, leather jackets, and tailored trousers remain sought after.

Still, 2020 has essentially become the year of the sweatpant and matching loungewear set. As such, buyers need to be discerning when making decisions about purchasing anything outside of that realm.

“Because there is so much uncertainty around what the next few months [will] look like,” says Mathur, “customers aren’t transitioning to [new] products as quickly.” She predicts that elevated sportswear, denim, cozy knitwear, and versatile pieces that can transition from “sofa to street” will be the most sought after. And it’s likely that pieces meant solely for the sofa will continue to be popular. Earlier this year, pajama sales increased 143 percent while sales of pants fell 13 percent, according to Adobe Analytics. “With the unpredictability of the world right now, our customer wants a wardrobe that is as flexible as her plans. Buy now, wear now has never been more important."

“There is a shift for a lot of people now to buy with a purpose,” adds Amanda Miller, a former buyer at Saks Fifth Avenue who recently joined Lingua Franca as head of wholesale and product management. Known for shirts emblazoned with fun, inspiring phrases, Lingua Franca is positioned to forge an organic relationship with their customers, despite current industry challenges.

“We are seeing people gravitate toward all phrasing that beams positivity, whether it be ‘Come together,’ ‘We the people,’ ‘Kindness matters,’ [or] ‘Give peace a chance,’ and also our phrasing that advocates and ties proceeds to specific charities,” Miller adds. “Retailers must be more creative than ever to give their customers a reason to buy, without the experience of being in a store. What can we offer that our customer does not already own? That is the question we should all be trying to figure out.”

The growing popularity of pieces benefitting social causes coincides with the industry’s current racial reckoning. After George Floyd’s killing in May, some fashion brands were inspired to confront racism in the industry and provide more opportunities for Black people who are systematically discriminated against. But, as Miller and many others have said, “it’s a marathon, not a sprint” — and one that’s long overdue.

“The Black Lives Matter movement was a necessary and important conversation for the fashion industry,” says Heather Gramstone, head of womenswear buying at Browns. “It has openly allowed us to acknowledge and address systemic racism,” she adds, noting that the retailer has created an internal forum for Black employees to share their experiences and implemented businesswide education and unlearning initiatives.

This industry has been revered by onlookers for being inclusive but if you are truly inside this world, you know that there is so much more work that needs to be done.

Over the summer, Browns became one of more than 100 companies to announce a pledge to Black In Fashion Council. Created by Teen Vogue Editor-in-Chief Lindsay Peoples-Wagner and fashion PR executive Sandrine Charles, the organization is aiming to help the industry become more inclusive by holding brands accountable for implementing diversity initiatives and empowering Black employees, as well as creating a more accessible pipeline for young Black students and professionals to break into the industry. (Both the writer, Leah Faye Cooper, and editor, Jessica Andrews, of this article are members.) Intermix has also signed on.

“This industry has been revered by onlookers for being inclusive,” Miller says, “but if you are truly inside this world — be it on the retail [or] wholesale side, or in media, styling or editorial, you know that there is so much more work that needs to be done.” Simply hiring people of color for diversity officer roles, she says, isn’t enough: “The real change will come when companies truly dig deep and realize they can support [the Black community] by recruiting from HBCUs, giving paid internships to people of color, and creating mentorship programming within their organizations to ensure the advancement and development of their employees of color.”

Echoing that sentiment, Mathur notes that “diversity cannot just be an initiative, as that implies there is a start and an end. Diversity must be woven into the way an organization operates on a day-to-day basis and the decisions it makes at the most junior and senior levels.” Only then will there be more opportunities for Black talent, more equitable workplaces, and more exposure for Black designers.

Mathur, who is leading diversity and inclusion efforts at Intermix, cites a disproportionately low number of designers of color as another glaring inequity. “When I look at the buying process and what our channels of new brand acquisition are — showrooms, Fashion Week, PR agencies — what stands out to me is how few designers of color are part of this pipeline,” she says. “That is the piece that must be addressed to create systemic change in bringing better representation of designers of color into major retailers.”

Previously, Intermix has worked with Harlem’s Fashion Row to have collections by Black designers reviewed by the retail group’s buyers. Similarly, Brown’s is working with global culture studio Metallic Inc. to broaden the reach of Nigerian labels through the studio’s Homecoming platform. Though details have yet to be announced, Koza says FWRD is working on a mentorship program for emerging Black talent and launching exclusive capsules designed in collaboration with Black designers.

Though brick-and-mortar closures have been widespread and many brands have been forced to shutter—among them New York-based standouts Cushnie and Sies Marjan — clothing and accessory sales saw an 11 percent uptick in September.

People are still buying less than they have in year’s past, but that may not be a bad thing if the industry as a whole is able to adjust to decreased demand and spend less on production. “Fashion has been so dependent on a never-ending cycle of newness that we often don’t give collections enough time to sell before we move on to the next,” Mathur says. “This state of reduced consumer demand has forced the entire industry to produce less and retailers to buy less, which I believe will have lasting implications for the way people think about and consume fashion.” Perhaps less will prove to be more.