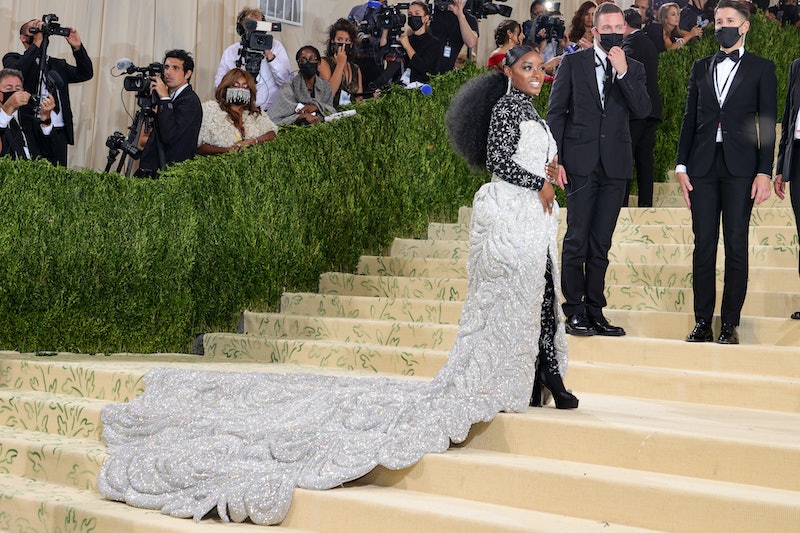 Fresh off the Olympics, Simone Biles seemed to have taken her leotards with her, choosing a look from the 2021 Met Gala with an underpinning that very well could have been tumbled in. In contrast, however, the heavy embellished silver gown that sat stop her turtleneck bodysuit was so difficult to maneuver that men followed in her wake, moving it with her as she ascended the stairs.

Her gown featured allover crystal embroidery meant to look like feathers, though it was decidedly heavier than airy feathers themselves. Heavy as it was, it was worn atop a full-body jumpsuit that the athlete was expected to wear solo once she arrived inside for a night of dinner and dancing.

The look, designed by Area, weighed approximately 88 pounds. What’s more, it took almost 6,700 hours and 100 craftsmen to create. According to The New York Times, Biles’ Met Gala look featured more than 17,000 feet of Swarovski glass crystal chains and almost 200 feet of tulle. Biles completed the glamorous outfit with jewelry by Fred Leighton, including a dangling pair of earrings.

Biles truly stunned on the red carpet tonight, proving that she’s come a long way since the beginning of her career in minidresses and prom-inspired looks. In short, the best is clearly yet to come, and Biles has punctuated the Olympic season with a gold medal-winning ensemble.