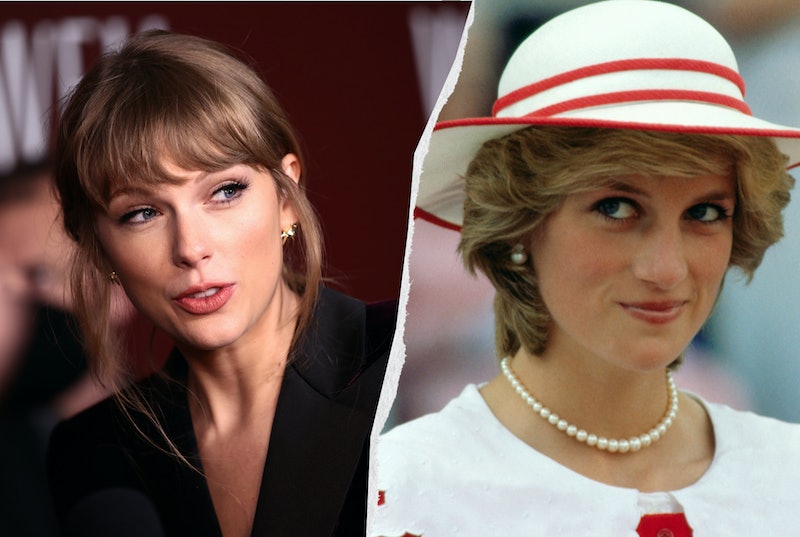 Taylor Swift hit “Late Night with Seth Meyers” on Thursday, Nov. 11, wearing a dress that has her fans abuzz. Sitting on the chair opposite Meyers to promote her new album Red (Taylor’s Version), Swift donned a little black dress that looked similar in color, length, and neckline detail to Princess Diana’s revenge dress.

The look in question was an off the shoulder black mini dress designed by David Koma, with a slit at her neckline, long sleeves, and a belted waist. Swift slipped into a pair of Aquazzura chain-embellished sling back pumps and finished it off with sparkly hoop earrings.

Nearly immediately after stepping onto the stage for Meyers’ show, social media went wild with comparisons of Swift’s little black dress to that iconic number that belonged to Princess Diana. And as it turned out, fans may not be that far off as Taylor’s Red (Taylor’s Version) album could be viewed as an act of revenge against certain people in the music industry.

For those unfamiliar, Diana’s Revenge Dress is an off the shoulder mini dress designed by Christina Stambolian that she wore to the charity dinner at the Serpentine Gallery in 1994, at the same time her ex-husband Prince Charles was confessing his adultery on national television. Talk about making a statement.

Swift’s perceived recreation is fitting as she is currently taking some revenge of her own. Many recognized that this is the second time Swift has recorded the Red album, following a public feud with Scooter Braun, who acquired her master recordings roughly two years ago. And in that way, she is stepping into her power and independence in a very similar way to Lady Di decades ago.

Swift debunked the theory in an interview with Access Hollywood saying it was simply “a black dress I liked.” But her fans aren’t convinced.

Ahead, find the best tweets in reaction to Swift’s look.

How could this not have been done on purpose?

So good, you’re in disbelief.

Is this the beginning of an era?

And she has an explanation for it.

When you realize everyone else is thinking what you’re thinking.