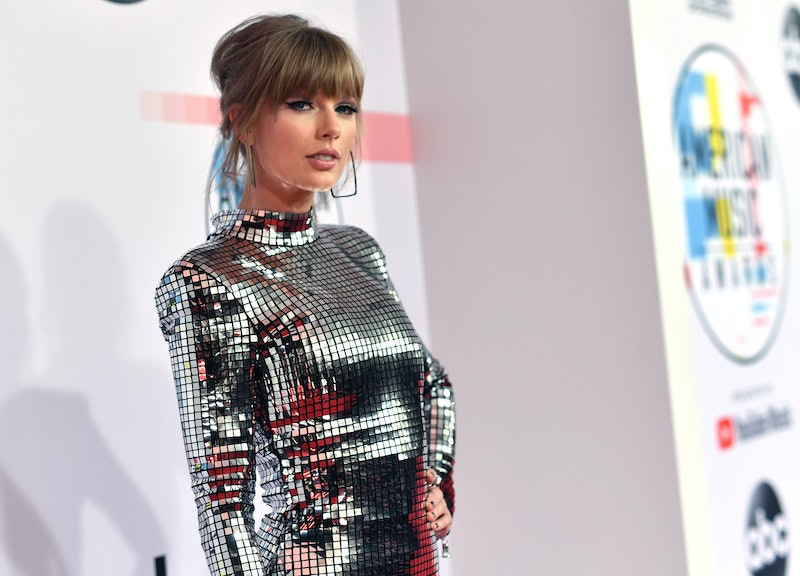 Just when you thought Taylor Swift couldn’t possibly have any new music to release after blessing the world with Folklore, the out-of-the-blue album she produced while in quarantine over the summer, she completely catches you off guard. In case you haven’t heard, on Thursday, Swift announced that Folklore actually has an entire sister record called Evermore, and oh yeah, it’s dropping at midnight. Casual, right? Even better, Taylor Swift's Evermore merch is already here.

Considering it’s been less than 24 hours since Taylor Swift's Evermore album has been out in the universe, Swifties are understandably still processing a lot of emotions. Fan theories are running absolutely wild — some think she could be dropping marriage hints, others are convinced that Folklore and Evermore are in fact part of a trilogy. Swift has been known to keep her fans guessing, so at this point, anything is possible.

Just like with Folklore, Taylor Swift launched merch to coincide with the Evermore release including two hoodies that are giving off some serious woodsy vibes. The “Bandit Like Me” hoodie is a vintage-washed, rust colored number that features the album cover artwork printed on the front. It would pair perfectly with your favorite worn-in denim, a sherpa coat, and classic white sneakers. The “Ever and Evermore” hoodie is also vintage-washed, but comes in a deep olive color that could be easily dressed up with black leggings and python print boots.

Fans are thrilled that she included plus sizes as both pieces go up to size 3X. "Coming in clutch with plus size merch," one fan tweeted. "Consider my Christmas bonus spent." Another tweeted "You guys, I'm so happy I could cry. Seeing that they expanded the plus-size option for merch is literally making me want to jump up and down."

The items are expected to ship within six to eight weeks, so be sure to get your orders in before these precious pieces of T-Swift history are long gone.