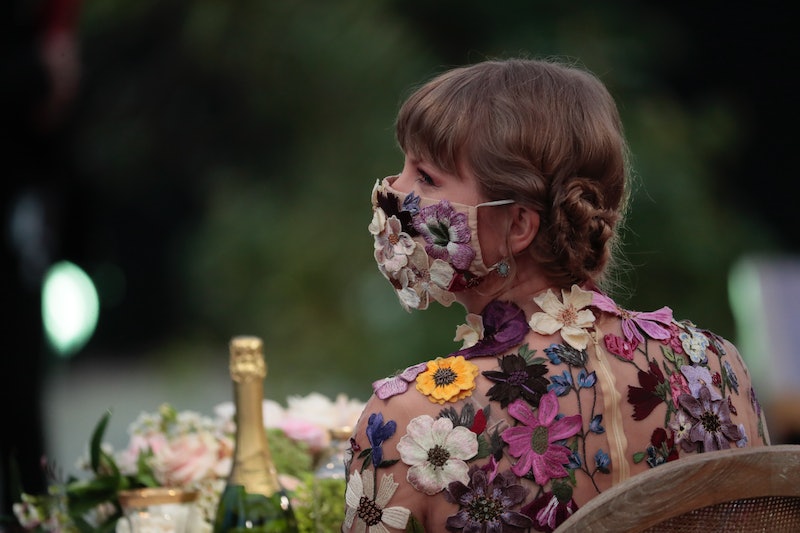 Taylor Swift’s 2021 Grammys red carpet look is in full bloom — literally. She wore an Oscar de la Renta dress that was bursting with flowers in an assortment of shades and shapes. It featured a high neck silhouette and dainty flared sleeves, adding even more touches of romance to an already ultra feminine frock.

To complete the look, she pulled her hair back and wore pink Christian Louboutin heels with ties around the ankles. Accessory-wise, she opted for jewelry by Cathy Waterman. And she finished the outfit with a matching floral face mask which took her outfit to a new level of epic. She went with a signature hair look with bangs and two space buns in the back. Her makeup was soft with pink blush and shadow which coordinated with her rosy lipstick hue.

Later on in the evening, she changed into a floor-sweeping navy gown by Etro, which had delicate metallic foil accents and exaggerated bell sleeves. That particular ensemble had noticeable Bridgerton vibes with its cinched, banded waist and those flowing sleeves. She even wore a golden crown above her fringe that paired with her low braided updo, which could’ve been a nod to one of her lyrics, “One single thread of gold tied me to you,” from her song “Invisible String.”

In addition to being a performer, Swift was also a nominee. She was a contender for Album of the Year, Best Pop Vocal Album, Song of the Year, and Best Pop Solo performance. For those not keeping track, Swift released two albums — Folklore and Evermore — in 2020, and she’s currently in the process of re-recording her first six studio albums. How’s that for being productive during quarantine?