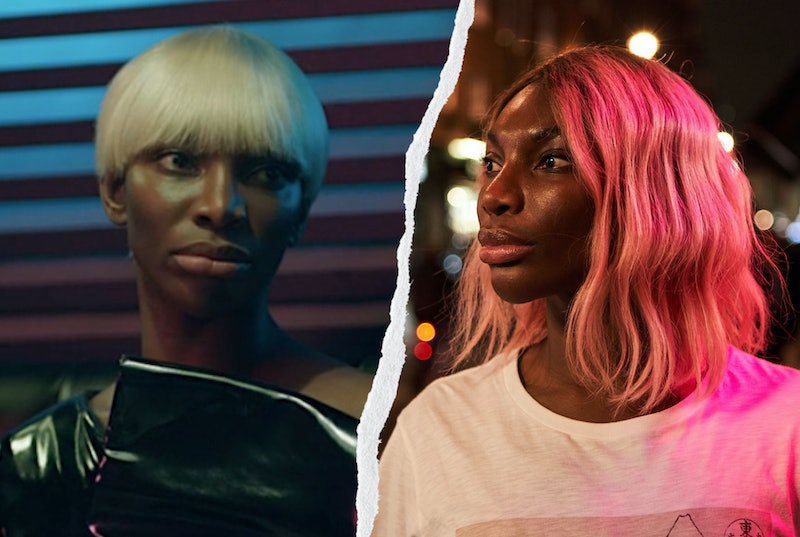 From the powerful writing to the artistic production, HBO's groundbreaking BBC One drama series I May Destroy You is essential viewing. Weaving together stories of sexual consent, race, and millennial life, the show has deservingly been deemed a "masterpiece" by fans and critics alike. Writer Michaela Coel, who also produced and co-directed the show, stars as Arabella, a writer who experiences severe emotional trauma when a night out ends in sexual assault. The series is littered with symbolism (Coel having previously revealed the various “Easter eggs” in the show) and now viewers have learnt that there’s also meaning behind the wigs worn by Coel in the series.

Bethany Swan, the hair and makeup designer on I May Destroy You, recently spoke to Allure about the intricate thought process behind Coel's wigs. Swan explained that, when she first received the script, it simply described Arabella as “a black girl with pink hair” but, from there, she, Coel, and costume designer Lynsey Moore went on a journey to discover how Arabella's hair could be used as a storytelling motif.

In I May Destory, Arabella's hair changes during the different stages of her journey as she is forced to uncover the harrowing details of her sexual assault throughout the season in order to move forward. (The show is inspired by Coel’s own experience dealing with a similar assault.) From bubblegum-pink to Dairy Milk purple, a wardrobe of wigs helps the audience identify the myriad tone shifts in Arabella’s internal monologue, Swan explained to Allure.

When we first meet Arabella, she is coming to the end of a prosperous chapter in her life. Yes, she’s got a book deal, but she’s struggling: she has writer’s block and she’s dating someone she knows isn’t quite right for her. And those ideas play out in the hairstyle she's wearing at that time: her pink wig. “We wanted this wig to feel lived in and well-loved,” Swan wrote in a recent Instagram post.

The colour, condition, and style of her hair at this point too is reflective of the confused, darker stages of Arabella’s journey. “Most of the trauma that happens to her happens while she's wearing that wig,” Swan told Allure. “We didn't want it to feel too pretty.”

She continued: “When we were discussing [it] with Michael, we wanted something that didn't necessarily complement her skin tone and felt a little bit jarring, so her skin didn't look the amazing, vibrant colour it normally looks. It just knocks it down a little bit.”

In an interview with InStyle, Coel also spoke about the pink wig, saying it was intended "to portray a woman who, although very confident, is falling apart when the show begins." She continued: "It’s not a flawless wig; it’s not an Instagrammable, 200,000 likes wig. At one point, when she took it out of the box, I’m sure it was glamorous and beautiful, much like her career when it popped off and she had a book and everything was great, but it’s wearing down and wearing thin."

Where the pink wig reflects Arabella’s internal struggle, the purple wig in episode three shows her at full confidence. “We wanted this wig to feel completely different to the pink wig so we went strong and vibrant and unapologetic in the colour,” Swan wrote in an Instagram post. Arabella is on an expenses-paid working holiday, her friends come out to see her and she’s writing her second book. Life seems good, and the colour of her wig needed to reflect those feelings. “We see what she looks like at the very apex of her self-esteem when her hair glows a molten lavender,” Swan told Allure.

In episode seven, when Arabella hosts a party for Terry’s birthday, we see her with a whole new look, including the hair. Swan explained to Allure that Arabella is "trying out another persona" that night, so her clothes were specifically chosen to reflect a big change and the hair needed to feel quite “un-Arabella” too. They chose a glossy black wig that's poker straight and very long. "I really wanted that sheen," Swan explained. "I would never recommend doing it on your own hair, but I was argan-oiling and then straightening to really soak."

In the last episode, there's another wig — a blonde short one – that Arabella wears as a disguise when she confronts her attacker. “In my mind, the femme fatale woman seeking revenge is always blonde,” Coel told InStyle about writing this particular wig into the script. “That’s how it’s depicted in movies — it’s this blonde woman who’s had enough.”

The brash blonde wig covers the eyebrows and sits like a bowl at the front, and is the only one cut by Swan herself. “I put it on [Michaela] and it looked so cool. We were like, ‘All right, this is the one,’” Swan told Allure. “We just wanted it to not feel like any characters that Michaela had done before or any personalities that Arabella had shown through hair.”

The hair cues in episode five weren’t originally written into the script, butcame about after a joint discussion between Swan, Coel and costume designer Lynsey Moore, Swan told Allure. “[The hairdresser scene] was originally going to be a hair colour change. But as we went the wig route, we decided that it would be cool to have it cut up because Michaela looks incredible with it completely shaved off, so why not show it?” she explained. “I love how the shaved head completely changes Arabella's silhouette: powerful and strong, but it can be vulnerable and exposed in equal measures.”

Arabella chooses to “rid herself of her femininity” at this point, Coel told InStyle, "after discovering she’s been raped twice."

Getting The Details Right

In her Allure interview, Swan (a white hair and makeup designer) also touched on the importance of getting the details on Coel’s look just right, researching the characters, costume options, current trends, music scenes, for six weeks to get an idea for who they would be and what she could do to ensure they look like real people. “When the characters come from an underrepresented background (onscreen), it’s even more important to get the little details right,” she told Allure. An example of which is the use of headwraps during exercise and sleep, and wrapping edges to set during makeup application. “It’s those little nuances that hopefully add to the story.”

Swan went on to say: “Afro hair training, sadly, doesn’t come as standard in hair and makeup colleges in the U.K. It isn’t a specialist subject, but it is treated as such.” She added: “I didn’t learn Afro hairstyling [at college],” she added, “but I put myself out there straight away and learned by assisting, asking questions, and practicing. It’s an essential part of my industry."

Swan ended by telling Allure, “It was a truly inspiring environment to be in. I’m incredibly proud to have worked on it.”