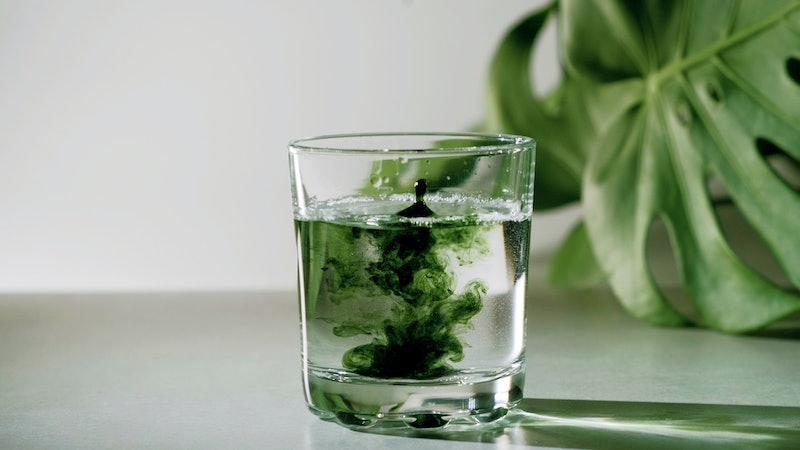 Shutterstock
By Hilary Shepherd
May 11, 2021

TikTok has given rise to a number of unconventional — and occasionally dangerous — health trends. The latest craze? Drinking chlorophyll water. As of today, #chlorophyllwater has roughly 94 million views on the social media platform, with users documenting one-week challenges, slathering it on their faces, breaking down the benefits, sharing DIY recipes, and more. Brands like Megababe, Sakara Life, and Cocokind have even released their own chlorophyll-centered products, while A-listers like Gwyneth Paltrow and Reese Witherspoon swear by the health and skin benefits of the ingredient.

So, what gives? Time to dust off that high school science textbook, because it’s important to start by understanding what chlorophyll actually is. In short, it’s the green pigment found in plants — and it plays an essential role in photosynthesis, the process in which plants convert solar energy into chemical energy. It’s found in green veggies like spinach, collard greens, broccoli, parsley, and asparagus, and has proven anti-inflammatory and antioxidant properties. It can be used topically or ingested, but consuming the pigment in liquid form is particularly buzzy on TikTok right now. Users are touting the dark green liquid for a multitude of external and internal health benefits, including improved gut health, less sluggishness, and clearer skin.

In terms of the latter, Dr. Muneeb Shah, DO, a dermatologist with over 6 million followers on TikTok, says there’s no real evidence that drinking chlorophyll can banish blemishes. But, he says, “some studies have shown that chlorophyllin — a derivative of chlorophyll — was helpful in fighting acne, but only when applied topically.” Dr. Sheila Farhang, MD, board-certified dermatologist and founder of Avant Dermatology & Aesthetics in Tucson, Arizona, agrees, adding that “a lot of the studies that showed statistically significant improvement [in skin] used [chlorophyll topically] in combination with in-office photodynamic light therapy, something that is known to improve acne.”

Nevertheless, chlorophyll water is seemingly everywhere now — and not just in our TikTok feeds. Sakara Life’s Detox Water Drops contain 100 milligrams of chlorophyllin, which is “directly extracted from white mulberry leaf for maximum potency,” founders Danielle Duboise and Whitney Tingle tell Bustle. Though the drops have been on the market since 2017, there’s currently a waitlist (likely due to this video). Meanwhile, Cocokind’s offerings include a chlorella powder tonic, which founder Priscilla Tsai says is “perfect for when you’re feeling sluggish or need a pick-me-up.”

Should you want to indulge in the hype, experts recommend drinking it once a day — or not at all. “Since green vegetables already contain high levels of chlorophyll, it would be best to just consume it in its natural form,” says Shah. (In other words, just eat more salads, since leafy greens are also a great source of healthy complexion boosters like vitamins A and K.) “Like anything, too much of a good thing can actually have potential side effects,” warns Farhang. She cites interactions with other drugs and supplements, rashes, and possible gastrointestinal symptoms as side effects to look out for.

When it comes to topical application, exercise caution when shopping. “It can be tricky trusting skin care products that add buzzy, trendy ingredients like chlorophyll when maybe it’s not even getting absorbed,” says Farhang. If it’s a breakout remedy that you’re looking for, she suggests that you “focus more on ingredients [centered] on treating acne, such as retinoids.”

The bottom line? “It is definitely being overhyped on social media right now,” says Shah. “TikTok does a good job of making things that are visually appealing go viral. I think it's a combination of two things: The eye-catching appearance of the green color mixing with water and influencers showing before-and-after results that are quite spectacular — and also unrealistic.”

Subramoniam, A et al. (2012). Chlorophyll revisited: anti-inflammatory activities of chlorophyll a and inhibition of expression of TNF-α gene by the same. Inflammation. https://pubmed.ncbi.nlm.nih.gov/22038065

More like this
How To Create The Ultimate Soothing Skin Care Routine
By Paris Giles
Benzoyl Peroxide For Acne Is Your Ticket To Clear Skin
By Paris Giles
Meet Foreverist, The Skin Care Brand That Keeps Tattoos Looking Fresh
By Audrey Noble
Sisley's New Enzyme Mask Brought My Dull Skin Back To Life
By Rachel Lapidos
Get Even More From Bustle — Sign Up For The Newsletter