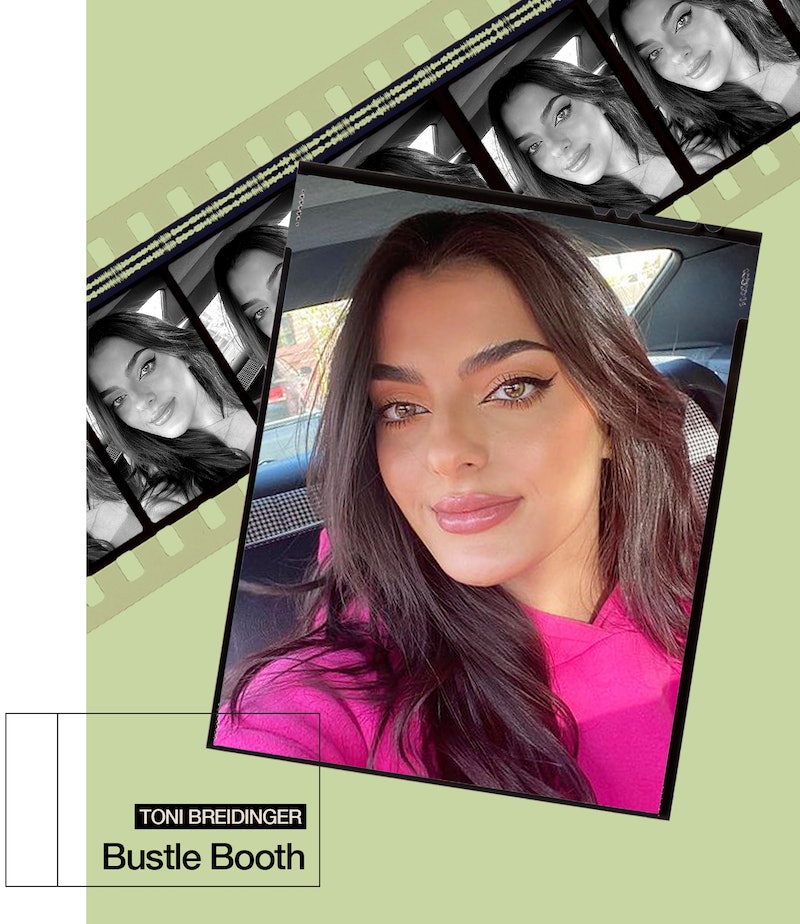 Toni Breidinger started off her year in Daytona, Florida — home to one of the most esteemed races (and most iconic racetracks) in NASCAR history. The 22-year-old finished in 18th place at the 2021 ARCA Menards Series season-opener, held in February at the Daytona International Speedway.

“It was a dream come true,” Breidinger tells Bustle over Zoom. “I’ve always dreamed to race there. I mean, Daytona is everybody’s dream racetrack. You hear about it when you’re a kid.”

The competition was just one of many pinch-me moments for Breidinger, who hails from Hillsborough, California and has loved race car-driving since she was nine years old. With 19 wins under her belt, Breidinger is the all-time winningest female in the United States Auto Club (aka the mother of race car driving). She’s also the first Arabic American female in NASCAR, though she doesn’t see herself any differently from anyone else in the sport.

“NASCAR is white male-dominated,” she says. “Being an Arab and a female, I’m going against two of their norms. It definitely is a little difficult to break into the sport and go up the ranks — I’m seen as somebody different — but I don’t see myself any different. At the end of the day, I’m the one behind the race car. If some random competitor sees me as someone differently, that’s super irrelevant.” Her job, she adds, is to do well for her team and to do well in the race car. “The car doesn’t know gender or race.”

Her status as a role-breaker has landed her numerous partnerships. Her latest, KVD Beauty, has just launched Epic Kiss, a range of creamy lipsticks in 15 colors with a shade inspired by people like Breidinger. Aptly called “Role Breaker,” the hue is a blue-toned red. “I’m not just saying this, but I’ve been using their products since high school when I was doing little makeup videos,” she says. Breidinger cites the new launch as her current fave and notes that it’s “super pigmented [...and] really nourishing on the lips.”

Though she wears a helmet when she races, Breidinger is a big makeup fan, often seen sporting a cat eye — even in the driver’s seat. Beauty, and makeup specifically, is an empowering tool for her. “It’s a bit of a statement,” she says. “People look down on somebody who wears a lot of makeup, but it’s a form of art. Whether you like to wear a lot of makeup or you prefer to put on ChapStick and call it a day, be confident in what you choose to do.”

With a new manufacturer (Toyota) and a brand new team (Venturini Motorsports), things are moving quickly, both literally and figuratively, for Breidinger. “I feel like I’m starting a new chapter,” she says. The same can be said for the race car-driving industry, which Breidinger feels is moving in a more diverse direction. “There are a lot more girls and a lot more people from different backgrounds coming in,” she says. “It’s really exciting to see the next generation.”

Get to know Breidinger — from who’s inspiring her lately to her fave movie quote — in the Bustle Booth Q&A below.

I always have my hometown and where I [currently] live, which is Charlotte [North Carolina], so I’d say San Francisco, Charlotte, and then I always have the next racetrack I’m going to. Right now, that’s in Chester, Indiana.

I kind of hate this one, but I love to use it: “If you ain’t first, you’re last.” It’s from Talladega Nights. It’s so easy to be salty if you’re not first.

Dragon Tales. I had it on every single day.

“22” by Taylor Swift. I just turned 22 and was blasting that in my car for an entire week.

Watching the Olympics and hearing about so many female athletes competing for the first time — or whatever their story is — has been really inspiring. Female athletes, in general, have been killing it.

[That I’m] someone who’s paving the way. If you’re paving the way, you’re helping others behind you, and you’re also a powerful, confident person.