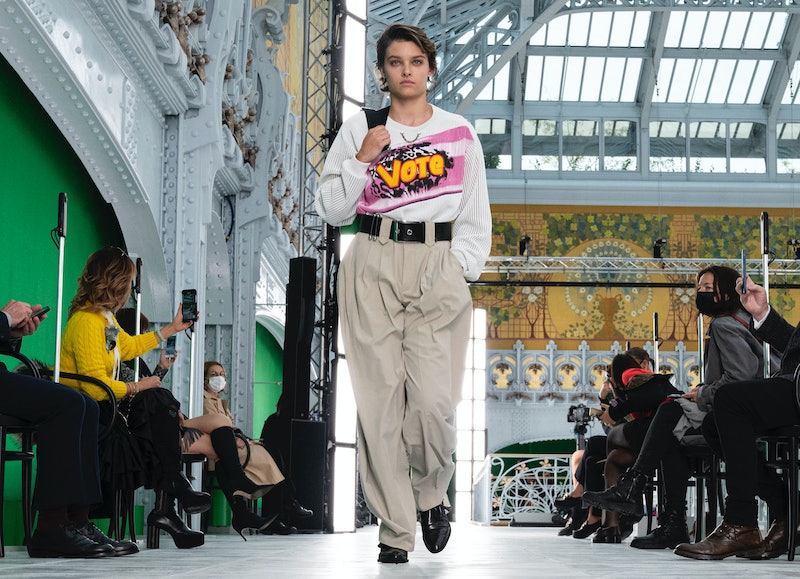 In this op-ed, writer Sara Radin explores how voting merch actually dilutes and oversimplifies the call for civic participation.

In August, Michelle Obama gave a heartfelt speech at the Democratic National Convention wearing a purple blouse and a dainty gold letter necklace you had to squint to read properly. There, hanging from her neck was the word “Vote.” It was a subtle yet appropriate prop for the encouraging words she delivered to some 21.57 million viewers. Her speech received the most social media interaction of any at the 2020 Democratic convention, and like many of her stylish ’fits, the necklace, made by a Black-owned brand named BYCHARI, became a hot ticket item overnight.

Since then, countless other public figures have used fashion to deliver the same message. For the 2020 Billboard Music Awards in October, Lizzo wore a black Christian Siriano dress with the word “Vote” plastered over it in big, white letters. In September, Jill Biden wore Stuart Weitzman boots emblazoned with “Vote” to cast her ballot in the Delaware state primary. The following month, Bebe Rexha shared an image of herself on Instagram wearing a “Vote” nipple cover. Then Gigi Hadid took a break from her new mom duties, posting a picture of herself wearing a colorful “vote” T-shirt. The term has become a stamp of solidarity, a motivational reminder to the nearly half of eligible voters who didn’t show up in the 2016 presidential election.

Unsurprisingly, retailers followed, creating voting merch as a strategy to build loyalty with customers: Urban Outfitters, for example, is selling “Thank you for voting” tees; Banana Republic has “Vote for a better republic” masks on offer. Whether you’re looking for slip-on shoes, trendy tote bags, braided bracelets, or sparkly hair clips, there’s a vote item for everyone. Many of these items have a “giving back” element, with brands incentivizing people to buy their products by donating proceeds to nonprofits.

Like a handmade sign at a protest, shouting the word “vote,” via one's clothing and into the Internet ether, feels small scale in the shadow of today’s grievances. To name a few, Amy Coney Barrett was sworn in as a Supreme Court Justice and now abortion and LGBTQ+ rights are on the line; lawyers can’t locate parents of 545 immigrant children; Black people are still being killed by police; climate policies are being rolled back; the COVID-19 death toll is rising.

Against this backdrop, just saying “vote!” flattens key messages about what’s really at stake, while also avoiding calling out a specific candidate and their policies. It also doesn’t address major issues like voter suppression, which prevents countless individuals from voting, with people of color, the elderly, and people with disabilities disproportionately affected, according to the ACLU. Unlike political messages that were popular in fashion circa the 2016 election, including catchphrases like “The future is feminism” and “Nasty Woman”, “Vote” is up for interpretation. “Vote should be the minimum,” says MI Leggett, the designer behind fashion brand, Official Rebrand, who created “Fuck Trump” underwear.

Just like the black square people shared on Instagram in solidarity with the Black Lives Matter movement in June, voting merch is textbook performative activism. In the wake of Breonna Taylor's killing, several shoppers bought T-shirts bearing her face and name, then shared a photo of themselves wearing it on Instagram. Doing so shows the world that they’re good people, but it fails to combat the systemic racism deeply embedded in the American justice and policing system. Actionable items like protesting, voting, lobbying local officials, signing petitions, and confronting their own internalized racism would have a much greater impact. But most people's efforts didn't extend beyond the purchase of another fashion item.

Even worse, the merch turned Taylor into a caricature, further dehumanizing her and reducing her life to a political fashion statement. That was also the case following Ruth Bader Ginsburg's death, when the wealth of RBG-themed products made her feel more like a cartoon character than a human being with family and loved ones in mourning. It's also worth asking how many people who purchased RBG items actually support the issues she stood for, including abortion rights and gender discrimination. Whether it's Breonna Taylor, RBG, or simply 'vote' merch, virtue signaling doesn’t get you very far. Radical change is needed.

Just saying “vote!” flattens key messages about what’s really at stake, while also avoiding calling out a specific candidate and their policies.

While it is helpful brands are raising money for non-profits and relief fund efforts through these sales — another intentional move that’s become popular with today’s consumers — the commodification of voting could also be distracting people from some of the biggest issues of our time while minimizing fashion’s larger role in the political issues we are facing. This includes climate change, child labor issues and the mistreatment of garment workers, and racism.

A single T-shirt or hair clip can’t encapsulate or solve all of our problems — as is true with the act of voting itself — but voting merch could get some people to the polls that wouldn’t maybe have gotten there otherwise. “This may actually have a very positive outcome,” says Carrera Kurnik, culture editor at Fashion Snoops. “For one thing ‘go out and vote’ is a non-divisive and non-partisan slogan.”

Still, if you’re going to buy something, support a smaller, independent brand, particularly one that’s run by a woman or person of color. Because for brands like BYCHARI, your purchase could help change a small Black business owner’s career overnight. And then, you’d actually be making a difference.