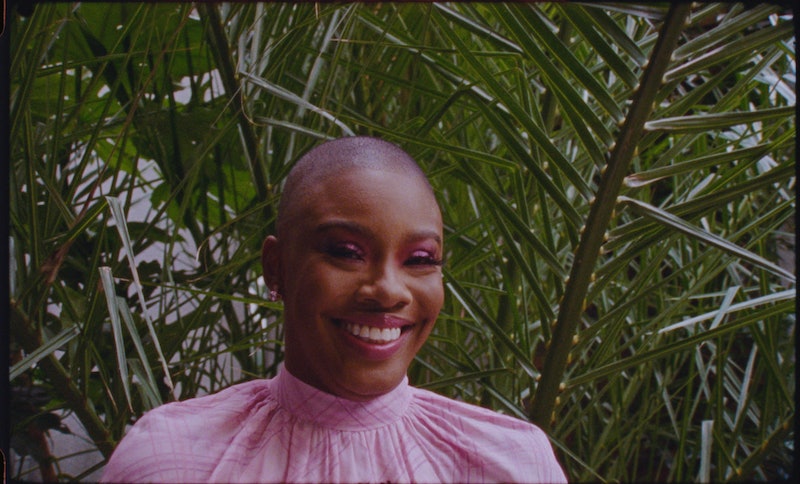 There's a familiarity when you speak to a fellow Black, British millennial woman about makeup. You tend to hear the same struggle story: misadventures with Maybelline's Dream Matte Mousse foundation, camera "flashback", and spending above the odds on premium brands due to a lack of high-street options. Award-winning journalist, and co-author of Slay In Your Lane, Yomi Adegoke shares a similar story. And it's this lived experience that steered her to partner with Sleek Makeup, a beauty brand that's long represented Black people. For Adegoke, it's not just about makeup, but progress she tells Bustle.

"I know Black beauty has become more of a mainstream concept recently, but Sleek has focused on Black beauty from the jump," says Adegoke about the partnership. "It doesn't feel like a scramble to be relevant, it's something that's been core to the brand for a really long time."

When Sleek Makeup started in East London in the '80s, it was one of the first British cosmetic brands to cater to women with darker skin tones. Adegoke tells me it's probably the one brand her mum knows; mine too.

Adegoke features in Sleek Makeup's new #IAmDivine campaign, alongside queer creative, writer, performer and LGBTQ+ advocate Darkwah Keyi-Darkwah and financial wellness coach Bola Sol. In the short video they create a conversation about the Black experience and the role of makeup as activism, advocating for positive change and the importance of self-care.

Recently, some of the top beauty brands have been noticeably widening their offering, with more shade ranges to suit all skin tones and hair types, while Black Youtube makeup stars are gaining greater influence. This shouldn't be considered radical in 2020, but nevertheless, it will have a significant impact on Black and brown consumers.

"Because every brand has had to catch up and make sure Black women and darker-skinned people aren't an after-thought, it means that we now have access to things that were once off-limits," Adegoke says. "When you have makeup that caters to your individual beauty, instead of within the framework of whiteness as the ideal, you come to embrace the features we were once taught to obscure."

Although she's just 29-years-old, Adegoke can remember a time when popping in to your local shop to find a foundation that matched your skin tone was virtually impossible. She recalls only using a slick of Vaseline, mascara and some questionable lip glosses as a teenager. "When I think of Black British beauty, I think about what it meant to me growing up," she tells me.

"It was Black girls making themselves look incredible with limited resources. It was literally spinning gold from hay. Girls from school would slick up their edges, they'd add lollipops into their ponytails, and loads of random stuff. People would stick diamantés into their edges, and I had a tooth gem," she laughs.

We reminisce (I'm also proud to admit that I owned tooth gems), but agree that it's an era we wouldn't necessarily want to return to. Today, it feels as if young people are really taking ownership of their beauty, and as a result are demanding to see themselves represented in brand campaigns and products.

From cultural ceremonies to carnival and club movements, Black people have used makeup as a means of expression for decades. "Beauty is such a personal thing," says Adegoke. "Yet, before we can get to a point where we understand that beauty is the least important thing about a woman, we have to embed the idea that if you are a Black woman, your value doesn't depend on how closely aligned you are with a racist beauty standard."

For Adegoke, setting her own beauty standard and defining her style using makeup was a conscious decision. She recently shaved her head, and tells me: "If I didn't have peers who showed me that a shaved head could look really nice, I wouldn't have done it." That confidence, she says, is the direct result of those who dared to be pioneers in the Black beauty space.